The Best Programming Language to Learn at Coding Bootcamp

Ruby vs Python vs JavaScript vs Java vs .NET – how do you choose your first programming language? Some experts will argue that fundamentals are more important than the language itself, and while we agree, you do need to choose a language in order to learn those fundamentals. We’re running through the pros and cons of each language, the average salaries to expect, and the job prospects for each language.

No matter the bootcamp, you’ll learn basics like HTML/CSS, tools like GitHub and AWS, database languages like SQL, and soft skills. Remember, as a developer, you’ll end up learning many programming languages throughout your career – that’s the nature of tech. So no matter which programming language you choose, be prepared to adapt!

If you want to be a Web Developer:

We’ll cover web development, mobile development, and data science in this guide, but Web Development is certainly the most robust landscape – you’ll need to choose between Ruby on Rails, Python, JavaScript, Java, and .NET. 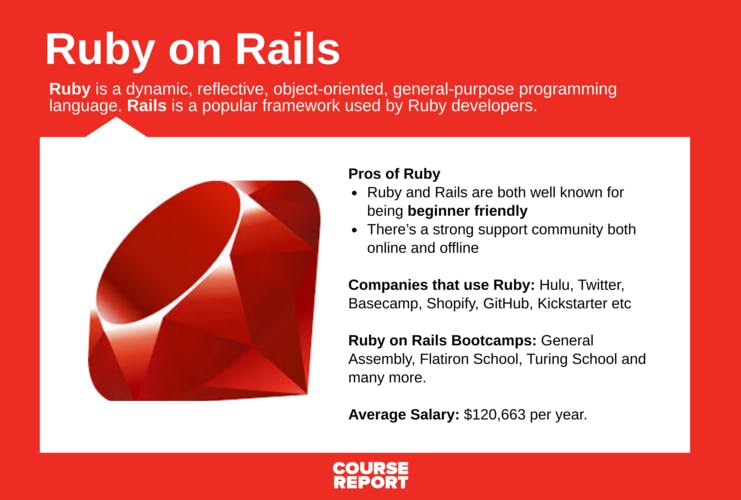 Benefits of Learning Ruby on Rails

The average salary for a Ruby On Rails Developer is $120,663 per year in the US. As Bloc mentor Ben Neely told us, “There’s a strong and growing demand for Ruby and Rails developers. It’s popular with startups. For a long time Rails was a niche startup language, but now it’s gained a lot of popularity even within larger corporations.”

Getting Started in Ruby on Rails

Both Ruby and Python are general purpose, which means they’re really flexible and you can do just about anything with them. You can talk to a database or build a web application or build a script for your computer to run, or you can run almost all of Google’s internal tools. 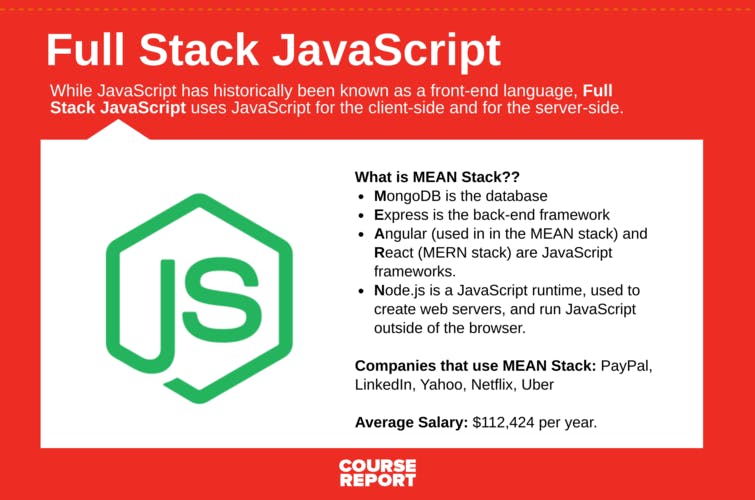 While JavaScript has historically been known as a front-end language, Full Stack JavaScript uses JavaScript for the client-side and for the server-side.

There are so many JavaScript frameworks and libraries, but the most popular are the MEAN and MERN Stacks. In the MEAN & MERN Stacks:

The average salary for a Javascript Developer is $112,424 per year in the United States.

How to get started in JavaScript? 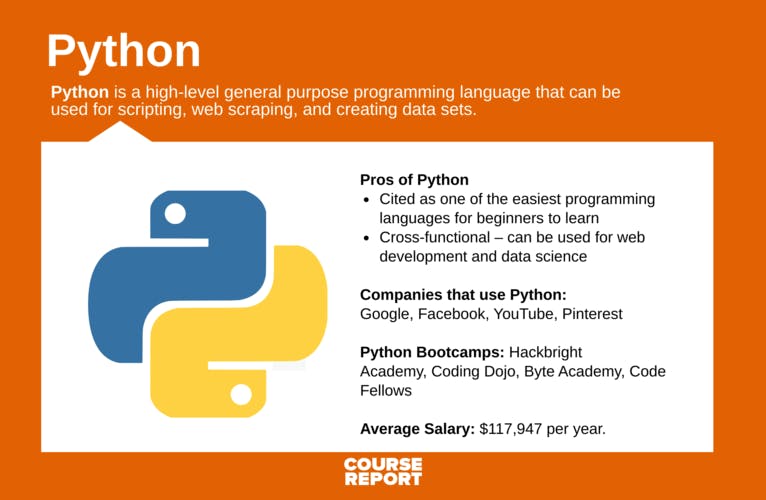 The average salary for a Python Developer is $117,947 per year in the US. With Python skills, you can be a Software Engineer or Web Developer; and because Python is great for data analytics, you could also get a job as a Data Analyst or a Data Scientist. 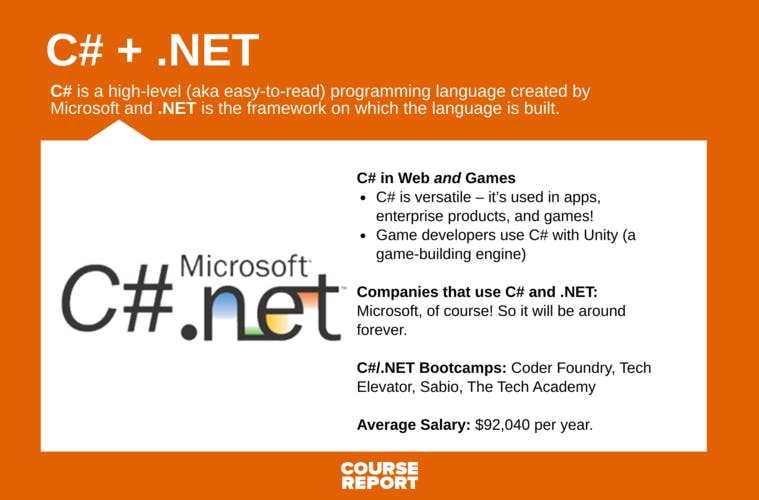 C# is a high-level (aka easy-to-read) programming language created by Microsoft and .NET is the framework on which the language is built.

Companies that use .NET

The average salary for a .NET Developer is $92,040 per year in the United States. 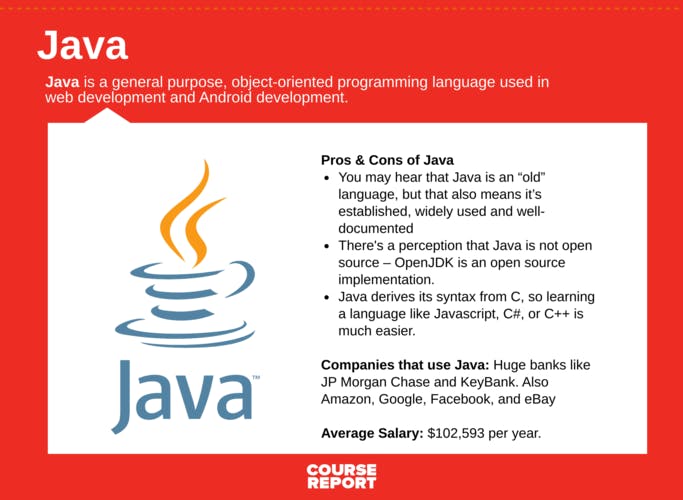 Companies that use Java

The average salary for a Java Developer is $102,593 per year in the United States.

Getting Started in Java

If you want to be a Mobile App Developer

Until 2014, there was only one choice if you wanted to build iOS apps: Objective C. In 2014, Apple launched Swift. That doesn’t mean Objective C is obsolete – many apps are still built on Objective C and developers are needed to maintain those codebases. And to build Android apps, you’ve got one choice: Android! Read our full guide to Mobile Development Bootcamps.

Objective-C is a powerful language that has been used for developing apps for all of Apple’s platforms since about 2000.

Most Bootcamps teach both iOS and Objective C, including: 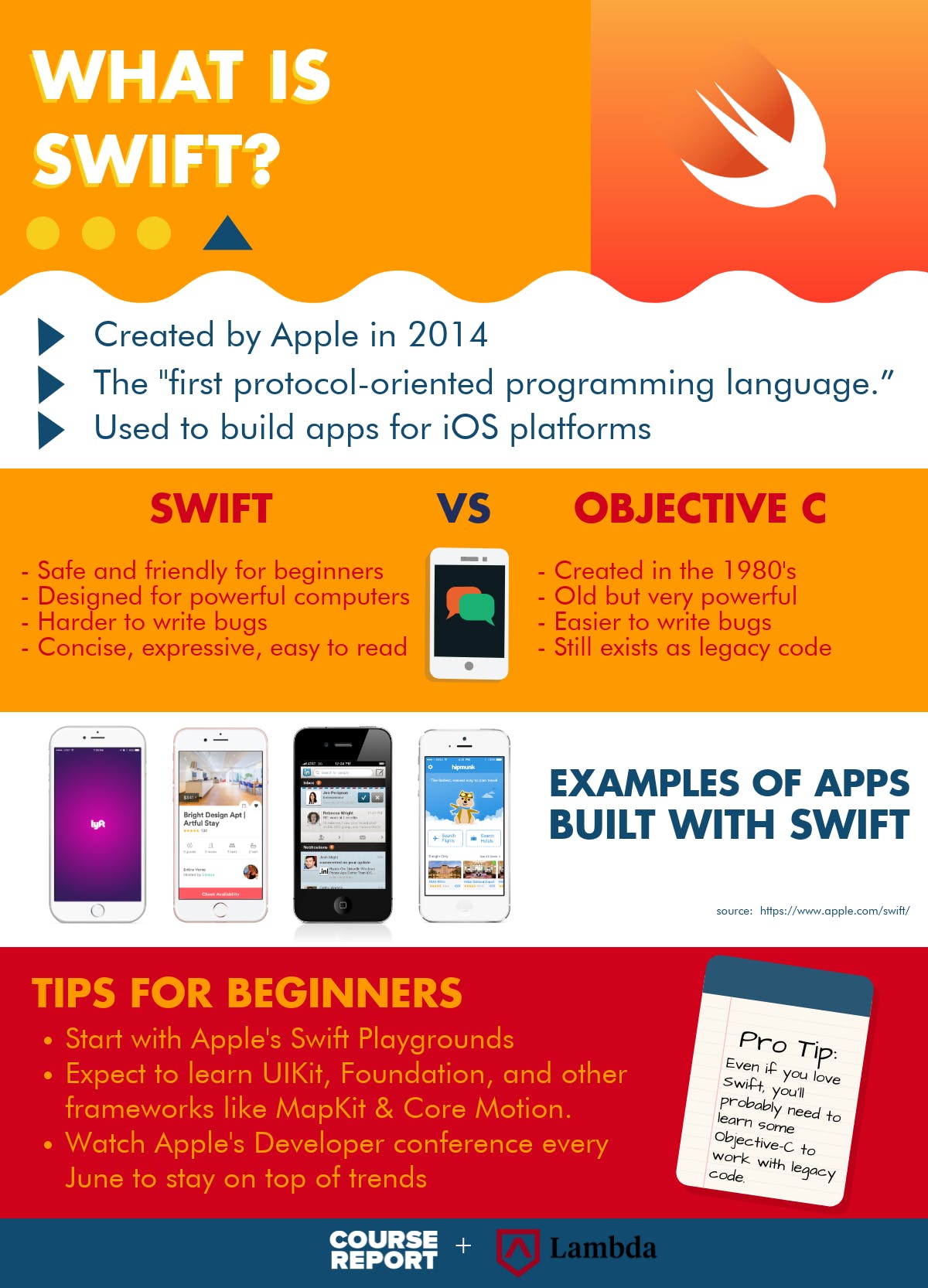 Android is a smartphone operating system (OS) developed by Google. It is designed for touchscreen devices like smartphones, tablets, and smart watches, as well as Android TV.

You’ll learn Android Studio, Java, and XML – and Android Bootcamp should also teach you how to launch your apps on the Google Play store.

The average salary for an Android Developer is $113,858 per year in the United States.

If you want to be a Data Scientist:

If you want to be a Data Science, you’ll need to choose between Python vs R – though you’ll probably end up using both.

Python vs R for Data Science

So there you have it – the ultimate rundown of all major coding languages. Remember that no matter which language you choose, programming is about continuous learning. Here are some tips for choosing between the above coding languages: