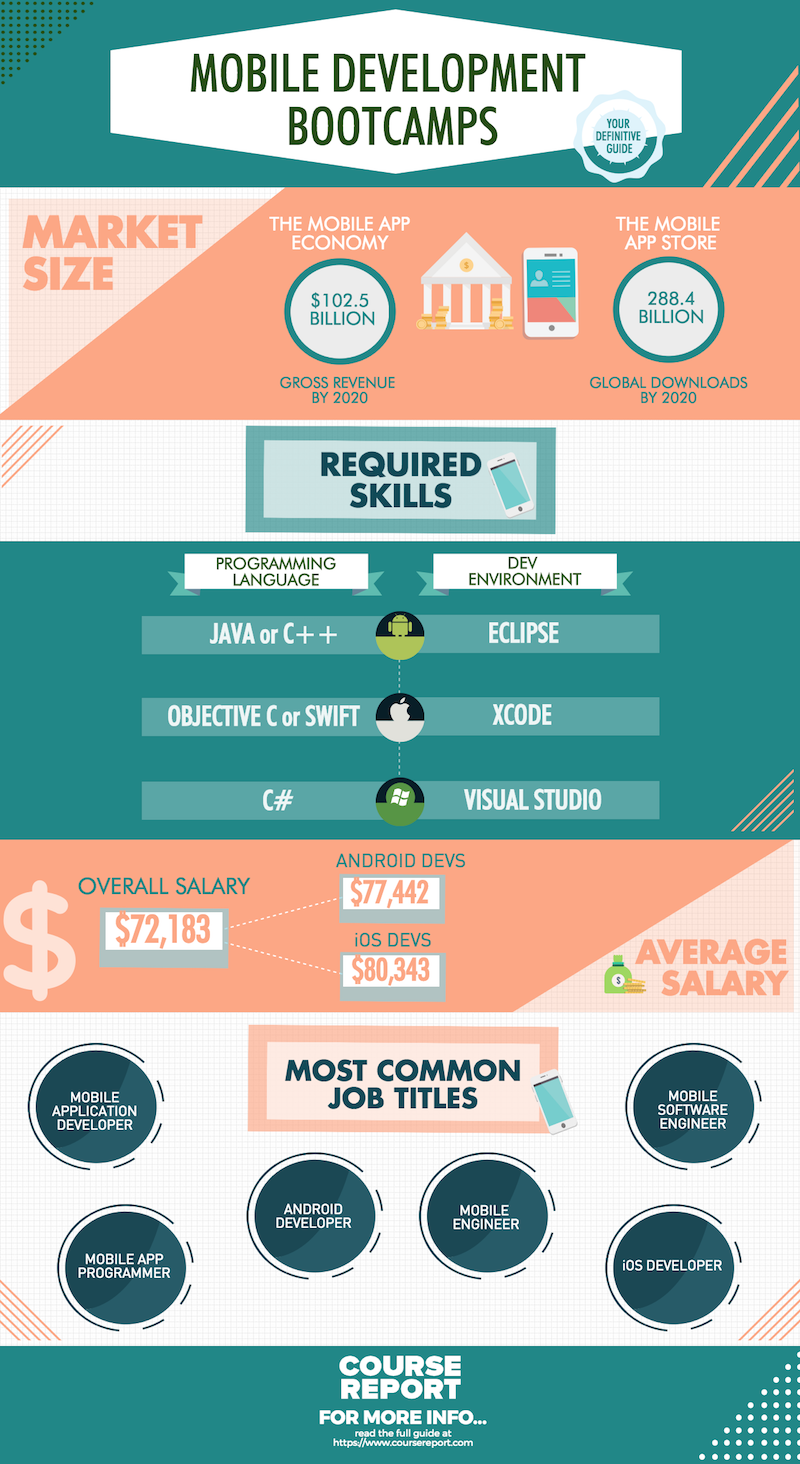 There’s something about a good mobile app that just helps you throughout the day– be it your Linkedin, Google maps, CNN, Nike+ Training, or ESPN app– we depend on our smartphones for a lot. Due to the global rise of smartphones and tablets, mobile apps can be the go-to source for information, entertainment, productivity, e-commerce, and more. By 2020, global mobile app store downloads will reach 288.4 billion! With the rise of mobile applications on the market, the demand for mobile software developers continues to grow. We thought it was only right to give you a breakdown of what it really takes to be a mobile applications developer. From educational requirements to general stats on the profession to the top mobile coding bootcamps around the world– read below for our Ultimate Guide to Mobile Development Bootcamps.

Mobile app development is on the rise! Various coding bootcamps are making it their mission to reduce barriers to tech education by providing an expedited way to produce the next best mobile devs through curriculum and access to industry experts.

Mobile application development is the process of building software specifically for mobile devices and technologies– think smartphone apps and wearable tech. If you’re interested in becoming a  mobile dev, then you’ll be in for a successful career ride. The Mobile App Economy is expected to hit $102.5 billion in gross revenues by 2020. This 20% growth from 41.8 billion in revenue in 2015 indicates the increase in need for professionals with mobile development expertise. An important thing to note is that 45% of the global mobile app store revenues will come from emerging markets. As of 2016, these markets such as India and Brazil, are in hyper growth. Mature markets such as the U.S. has become saturated, proving a slower growth in downloads. Even with a slower growth in downloads in mature markets, more time is spent engaging in mobile apps and more money is being spent through e-commerce, predicting a $23.2 billion revenue increase by 2020.

As an app developer is responsible for building, testing, implementing, and maintaining mobile apps, you can earn an average salary $72,183 in the US, according to Payscale. The average salary range for a mobile dev is $41,195 - $108,890.

Mobile Technologies You Should Learn 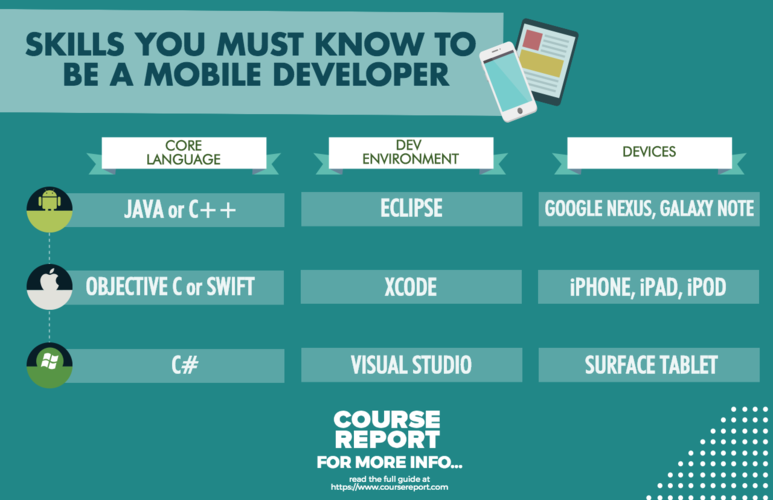 Most mobile dev positions do not require a bachelor’s degree, but rather proven skill that can be tested in a coding challenge or whiteboarding interview exercise. Even better? Have a portfolio of your own apps ready to show an employer!

Developers in this field will work with mobile frameworks like Apple’s Xcode, or Android’s SDK using Eclipse, and need knowledge of the following languages: Objective-C, C++, Java, C#, and Swift. It’s also useful to have expertise in CSS, HTML5, and Javascript frameworks including jQuery and BootStrap. Like any software developer, you’ll need to be self-motivated, but it’s important to know that communication skills are a must in app development, as typical positions require cross collaboration with various departments within an organization.

“In many ways, because there is so much opportunity in mobile right now, it’s completely legitimate to go with what you like to use as a user. But you can be more analytical than that. If your aspirations tied to the international market – Android is a good option. They have around 80% of the world market. But if your focus is the U.S. market or early adopters of technology, or your goal is app monetization through in-app purchases or paid apps – iOS is a better choice. And remember, in the U.S., iOS and Android have almost the same market share. But it’s not a once in a lifetime decision. If you can write apps in iOS you can easily transition to the Android and vice versa. The underlying fundamentals are very similar.”

Is one easier to learn than the other?

“No. If somebody’s starting from scratch, Android or iOS should take roughly the same time to pick up. Most people don’t know this but there’s a remarkable level of design and architectural similarity between Java for Android apps and Objective-C for iOS apps."

Trying to decide which type of mobile application development you want to learn can be tricky. According to IDC, Q3 data in 2016 showed that Androids took up 86.8% of global market share, while 12.5% went to iOS,.3% went to Windows Phones, and .4% went to other models. With more Androids in the market, there’s a higher need for Android developers worldwide– but that doesn’t mean you can’t have a preference! As Aditya from TurnToTech puts it, “people with experience in Java are likely to find Android easier to get started with, and people with experience in C++ or C are likely to find iOS easier to pick up.” If you’re thinking about iOS development- here’s a breakdown on learning Objective-C vs. Swift.

You may have heard of mobile frameworks like Phonegap, Cordova, or more recently, React Native or Xamarin. These are frameworks that allow developers to build apps without learning mobile development languages like iOS or Android. The upside? Less to learn! The downside? The ease can come at a cost. Mobile frameworks may not be supported by Apple or Google, so you run the risk of your code not working perfectly with new updates. The founder of TurnToTech in New York wrote a great piece on the comparison between React Native and Native Mobile Development if you’d like to read more.

If you’re set on learning a mobile framework at a coding bootcamp, then check out these schools:

And just because a coding bootcamp doesn’t explicitly teach a mobile framework, you can still learn one fairly easily during the bootcamp! Remember Tom Goldenberg? He went to Dev Bootcamp in NYC, but chose to learn React Native and even created buildreactnative.com.

Our Suggestions for the Best Mobile Coding Bootcamps

We’ve got a list of iOS bootcamps and Android bootcamps to browse, but here’s a shortlist of top coding bootcamps teaching mobile dev:

Thinkful
Length: Self-paced for 3 months part-time
Curriculum: Thinkful will teach the basics of Swift and Xcode. Students will learn view controllers and table views along with the building blocs of iOS development.
Career Prep: Students receive 1-on-1 mentorship throughout the course for course help and job preparation.
Cost: $500 per month
Location: Online