What will your salary be after coding bootcamp? Coding bootcamps are judged almost entirely by their ability to find students high-paying jobs as web developers. Some schools release data about alumni jobs, others offer money-back job guarantees or deferred tuition, but how much are students earning when they graduate and how does their earning potential change as they gain experience? Every year, Course Report surveys real coding bootcamp graduates to better understand who is graduating from coding bootcamps and how successful they are in the workforce. Let’s explore the web developer salaries that alumni see after a bootcamp.

How much do coding bootcamp graduates earn in their first jobs?

In Course Report’s most recent study of 3,043 graduates, we find that coding bootcamp graduates earn an average $69,079, with a median salary of $65,000 in their first jobs.

Not only is that salary impressive, but it also marks a 56% salary increase in comparison to an alumni’s pre-bootcamp salary. For some, like former administration worker Devon Lindsey, the raise is even more transformative: “I quadrupled my salary and have this whole new exciting career coming my way,” she says. Linguistics and anthropology major Ileana Ordonez also saw her salary quadruple after graduating from General Assembly’s Web Development Immersive: “I knew exactly how much I was worth when I negotiated [my salary]... I actually got more than what I was looking for, which blew my mind and I’m really happy about it.”

We found that about 66% of coding bootcamp grads found their jobs within 90 days or less.

How much do coding bootcamp graduates earn in their second and third web developer jobs?

As bootcamp grads progress in their careers, salaries rise as well. In this latest survey, we found that in their second jobs, bootcamp graduates earn $80,943 per year, and by their third jobs, alumni report earning, on average, $99,229 per year! This data confirms that as new grads become more experienced web developers, they’re also increasingly valuable to their teams and companies (and can command higher salaries).

For example, Julia worked for nonprofits before attending Sabio, and now four years after graduating, her salary rings in over $100,000.

David, a former high school teacher, graduated from Codesmith in 2016 and landed a job at small online health startup MedCircle. After 10 months there, learning and growing as an engineer, David accepted a job as a Web Solutions Engineer at Google, where the average salary is $120,081.

How much can you earn as a web developer if you don’t have a college degree?

Post-graduation salaries certainly depend on factors like background and education. However, while the lack of a college degree can limit your career, programming is a field that values ability over degrees. Coding bootcamp graduates without bachelor’s degrees still see an average salary of $61,836 – which is an average increase of 77% compared to their pre-bootcamp salaries.

For example, Temple Naylor attended The Tech Academy at age 19, without going to college, and landed a Lead Developer role after graduating.

Coding bootcamp grads who have a bachelor's degree see a salary increase of 57% to $71,267.

Does the amount of pre-bootcamp programming experience affect salary?

There is a significant difference in salary between complete beginners, and people who have done some self teaching. 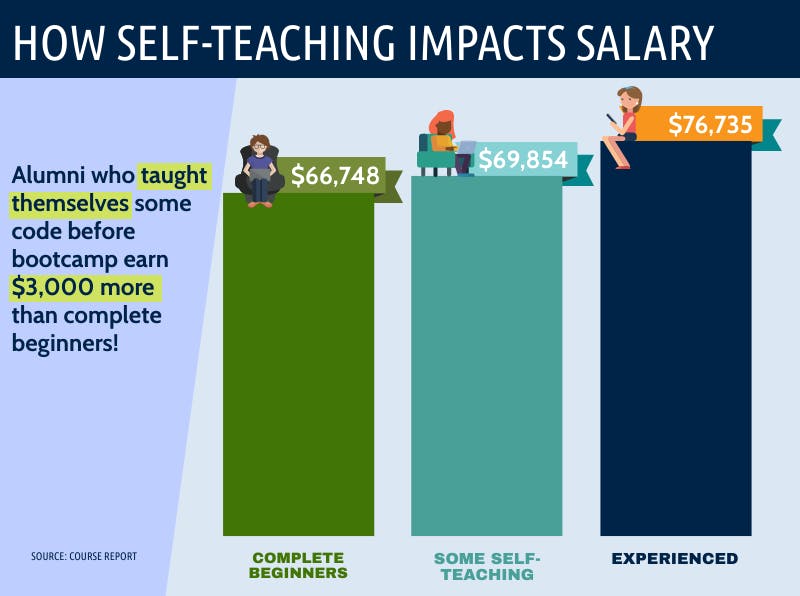 For example, Emma, a graduate of The Software Guild, learned some R and Python before starting the bootcamp, and is now working as developer at Best Buy. She reflects on her career change: “I was a volunteer before this job, so by moving into this career, my salary multiplied by six.”

Which coding language should I learn to earn the highest web development salaries?

In which cities do coding bootcamp grads earn the most?

In addition to pre-bootcamp experience, salaries seem to be influenced by location. Graduates working in San Francisco make the highest salaries; the average is $97,666. Next up is Seattle where grads make an average of $88,586. Graduates working in New York City had the third highest average salary of $87,205.

However, living costs are likely to be higher in those tech hubs in Seattle, San Francisco, and New York City, so make sure to take that into consideration when looking for a job.

What types of Web Developer jobs can bootcamp grads get?

Based on data from our 2020 Coding Bootcamp Graduate Outcomes Survey, these are the most popular job titles that bootcamp grads reported:

For a deep dive into what these jobs entail, the languages you need to learn, and which bootcamps teach them, check out our guide to Web Developer Jobs!

How much do graduates from each coding bootcamp earn?

While our Outcomes study reports on data in aggregate, many schools release their own outcomes reports.

Note: All of the above numbers are self-reported about graduates who successfully completed each course, and some of them have been evaluated by a third-party auditor. Also note that some of these results are reported via averages, and some via medians, so the amounts may not always be comparable. You can find more coding bootcamp outcomes data at the Council on Integrity Results Reporting.

How can you increase your chances of a high salary after coding bootcamp?

Having a college degree certainly helps, but it’s still possible to land a respectable salary without one. Finding a job in a city with higher salaries can help too, but the living costs may be higher in those areas.

No matter what, the most successful bootcampers commit to a goal and work hard before, during and after bootcamp to land a well-paying job. One of those successful alumni, Tom Goldenberg, approached bootcamp with a lot of intensity: “My advice is you do really have to go above and beyond,” he says. “You have to network and build really non-trivial projects to showcase for employers to get that full-time position.”

Then once you graduate, it’s all about networking, meeting people, and showcasing your skills.

10 non-profit bootcamps with a mission to change tech!

Everything you need to know about Thinkful's new Deferred Tuition plan!

Everything you need to know about Tech Elevator's ISA