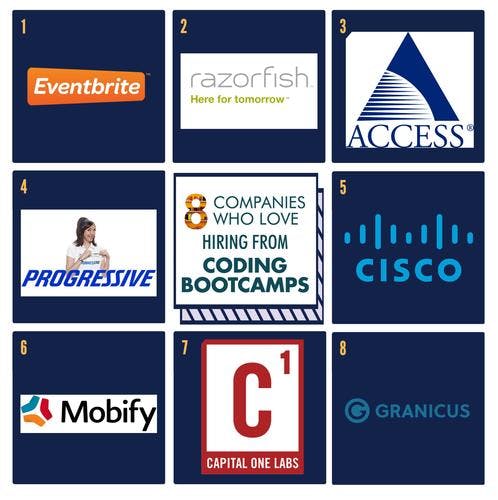 In our recent Student Outcomes survey, alumni reported that they were working in over 650 different companies! Of course, you may have read recent press citing companies like Google who apparently aren’t willing to invest in junior technical talent from coding bootcamps (we happen to know that coding bootcamp grads have been hired at Google and Salesforce, but that’s not the point)... Here we’re highlighting 8 forward-thinking companies who are psyched about the bootcamp alumni on their engineering teams. Each of these employers have hired multiple developers, and are seeing their investment pay off.

This list is as varied as the jobs bootcampers take after graduation; companies run the gamut from startups, to mid-sized engineering teams, to enterprise companies with thousands of developers. Bonus: start at the bottom for advice from employers to employers about hiring from bootcamps.

Eventbrite is an online ticketing platform with a 145-person engineering team, and has hired 8 coding bootcamp graduates!

Roles they hire bootcamp grads for: Software Engineer Level One

What they love about coding bootcamp grads: “There's an element of fearlessness that exists for people who have self-selected into a bootcamp like Hackbright Academy. Hackbright grads haven't all necessarily had traditional schooling or backgrounds, and I think that developers who have shown fearlessness tend to be really strong. They tend to be really great at learning and working through whatever problems they may have.” –Pat Poels, Director of Engineering at Eventbrite

Razorfish is a digital marketing agency with a 120-person technical team, and they’ve hired 7 coding bootcamp graduates (so far)!

A coding bootcamp is able to turn over their curriculum quickly as the tech landscape changes. I hate to be crushing four-year universities because they definitely have their place in the tech space, of course, but it's hard for a four-year university with a very solid locked-in curriculum to change at that same pace. Bootcamps are teaching things that are more applicable, more emerging, more innovative than someone out of a four-year university.” –Talent Acquisitions Manager Nick Easlick

Access Development is a B2B rewards and loyalty company in Utah with a team of developers working in Java and Ruby, and they’ve hired 6 coding bootcampers!

Progressive Insurance is a tech company that sells insurance with an IT organization of 3,500+ people, and they’ve hired 8 coding bootcamp graduates in one year alone.

What they love about coding bootcamp grads: “When I look at our coding bootcamp hires, I find individuals who have some life lessons under their belt. They're still junior developers, but they come with a higher level of maturity than I get from a student right out of college. Plus, they have some life lessons and business acumen. Progressive is a pretty casual company – we're certainly not a suit and tie company – but you still have to know how to navigate a corporate environment. Coding bootcamp graduates tend to have that.” –Jane Gundlach, IT Manager

The Chief Technology and Architecture Office (CTAO) at Cisco is a small innovation team that has hired 4 coding bootcamp grads.

What they love about coding bootcamp grads: “These days, most front-end and full-stack engineer resumes look the same, everyone lists the same set of frameworks and tools and whatnot. We’ve found the only way to really gauge a candidate is by the quality of the code they write. Since the Hack Reactor folks have their final projects and other work available on GitHub, it’s easy to get a sense for what type of developer they’re going to be. On top of that, the Hack Reactor program seems to prepare students exceptionally well, they have a good sense of what it’s like to work on a modern web development project.” –Director of Experience Design, Dustin Beltramo and Technical Leader, Joe Sutton

Mobify is a mobile eCommerce platform based in Vancouver, Canada that optimizes the shopping experience, and over the past two years, they’ve hired 4 coding bootcamp graduates.

What they love about coding bootcamp grads: “Because the Lighthouse Labs grads have such varied backgrounds, Mobify has been able to find Lighthouse Labs talent that are a good fit for different areas of the business. Some got an undergraduate degree in math or science and then decided to go into software engineering after graduation, so they can hit the ground running in a more complex technical role. Others are coming from a design background and might need a bit more training to ramp up. Students who are making a career transition and decide they want to be involved in design and development are typically better suited for some of Mobify’s more junior positions.”–Laura Crawford, Talent Acquisition Manager

Roles they hire bootcamp grads for: Junior engineering roles (although Granicus doesn’t like to use Junior/Senior labels)

What they love about coding bootcamp grads: “The strength of the community at Turing is obvious- grads are going back to events at Turing as alumni and supporting each other, mentoring, and showing current students what they’re experiencing in the workplace and what they can expect to run into. I like that about them.” –Chris, Engineering Manager

Capital One Labs is an experimental product and technology team within the larger Capital One organization, and have hired data science bootcamp grads.

Coding bootcamps they hire from: Metis

Their advice to other employers hiring bootcampers: “The hardest part for us [about hiring from a coding bootcamp] is having an interview process that selects the top talent and making sure that applicants are the right fit for our role. At the same time, we have to be fast enough and agile to work with Metis grads as well because there's so much competition for this talent. My advice is to start early and build a strong relationship with the bootcamp and then build out a process that can effectively and quickly hire the right people.”–Brennan Biddle of Capital One Labs

Are you an employer considering hiring from a coding bootcamp? Here are the top tips we heard from hiring partners as you navigate the world of coding bootcamp grads:

​​Do you work for a company that hires bootcampers? Have advice for bootcamp grads or other employers? Let us know in the comments!