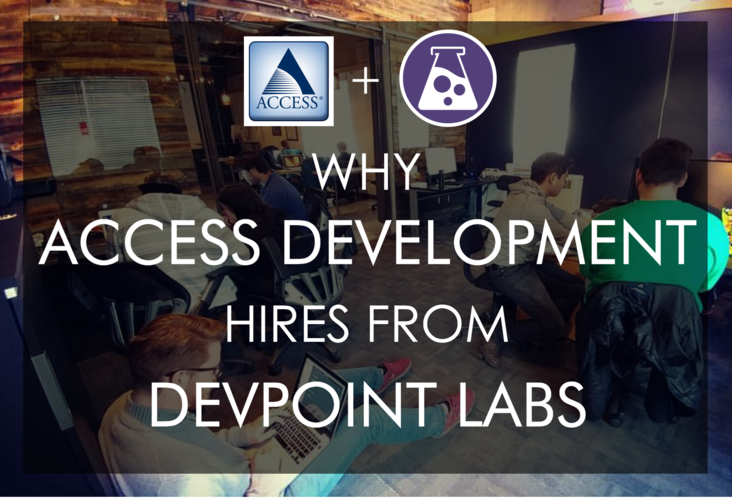 Access Development is a B2B rewards and loyalty company in Utah with a team of developers working in Java and Ruby. We spoke with CTO Clint Peterson about the six DevPoint Labs coding bootcamp graduates he’s hired over the past two years (one of his first hires is now a team manager!) and how bootcamp grads bring a different perspective than CS degree graduates, but do equally well in technical interviews. Find out what Access Development looks for in a new hire and how their mentorship process ensures new hires are supported in their learning and growth.

Access Development is in the business of loyalty marketing. We have developed relationships with about 350,000 merchants around the country, who are willing to offer discounts on goods and services to people who belong to some sort of organization. For example, if you are a member of a local teachers’ association or union, you may pay your annual membership fee, and part of that fee gives you access to loyalty benefits provided by Access Development. Most benefits come in the form of a web application or a mobile application, that gives you access to discounts on everything from local restaurants, to rental cars, hotel stays, and dry cleaning. Access started in 1984. We are a B2B shop, we don’t have a direct to consumer business.

How large is the technical team at Access Development and what’s your role?

We have a team of about 28 technology professionals, which includes eight full-time Java developers, six full-time Ruby developers, a QA team, and support staff. I’m the Chief Technology Officer and I manage all of those teams, providing support and direction to each team manager. I’m also responsible for the overall technology strategy, not only to meet our internal infrastructure needs, but also for our clients who are paying for our services.

How did you get connected with developers from DevPoint Labs?

A few years ago Access was a partner in a new company that needed to build out a public-facing application. That company hired a DevPoint Labs graduate who was also teaching at DevPoint Labs. He was able to do some amazing things for this company. We were so impressed with him that we brought him on at Access Development as our first Ruby developer. He then helped us build a team of Ruby developers, and we took on a bunch of small projects, building a cool set of REST APIs and web services, as well as brand new hybrid mobile and web applications for our clients to use.

How many DevPoint Labs grads have you hired now, and for what sort of roles?

We’ve hired six DevPoint Labs grads. One of them is the manager of the Ruby developer team, and the others are doing full stack Ruby development. They are involved in the hybrid mobile application as well as the desktop app.

What kind of projects do the DevPoint Labs grads work on at Access Development?

Right now they are working on a push-messaging portal. Within our mobile application we have the ability to push messaging for targeted notifications, so a couple of the developers are building out our application so that business clients can customize the messages they send to app users. The other project is a travel booking application, and the DevPoint Labs grads are working on the front end UX/UI of that application

Other than through DevPoint Labs, how do you usually hire developers?

We’ve taken three approaches. One, we have an internal HR team which helps drive potential applicants in the door. We’ve also worked with placement firms, which usually means we’re using a contract-to-hire process, where we hire someone as a contractor at first, then over the course of three to six months, we bring them on full-time if everything works out. However, our strongest hiring channel is word of mouth and referrals from existing employees.

What are you usually looking for in a new hire? Does Access Development put an emphasis on technical skills vs. culture fit?

Our platforms run on Amazon Web Services, so we’re looking for folks who are not only capable in a particular developer skill set – Ruby or Java – but also have some sense of the capabilities available to us from Amazon. So on the Ruby side, we’re looking for full stack developers who have a couple of years of experience, and to date, those have all been DevPoint Lab graduates.  As far as culture, Access was just named one of the top workplaces in Utah by the Salt Lake Tribune. Our employees are able to have distinct work/life balance, and we emphasize teamwork and collaboration here.

Do you notice differences in hiring bootcamp grads vs. applicants from more traditional channels?

Most of our Java developers are typical computer science grads who come to us with a number of years of experience and a CS degree. The only real difference we’ve seen has been breadth and depth of experience. Skillset-wise, bootcamp grads are coming to us with good capabilities, though perhaps a bit green. Bootcamp grads can really develop and grow without any trouble.

What stood out about those six DevPoint Labs graduates that got them the job?

Actually the strongest references we had were from candidate’s peers who knew them from DevPoint Labs. Someone on our existing team said, “Hey look, this is a really sharp guy who I’ve worked with, let’s interview him and bring him on.” So through the interview process, both the social interview and technical evaluation, the DevPoint Labs graduates just stood out as great candidates and have proved to be such.

Do these bootcamp graduates do as well as Computer Science graduates in a technical interview?

For the level of experience they have, yes. Again, if I were hiring a new Computer Science student who just came out of college, versus a DevPoint Lab graduate, their technical skill sets and capabilities would be very similar.

What does the relationship look like between Access Development and DevPoint Labs? Do you pay a referral fee when you hire their graduates or are you paying to be a part of their hiring network?

No, we don’t pay for anything.

Do you think there are any advantages to coding bootcamp grads over more traditional developers with CS degrees?

I think there are advantages, and one of those is the coding bootcamp grad’s perspective. Coding bootcamps are not as rigid, or as focused on some of the historical structure that CS grads think about when they are developing software. So bootcamp grads bring an interesting perspective that has really helped our development team move into a new realm, such as extending into continuous delivery, test automation and some of the other modern development technologies and capabilities.

I know DevPoint Labs grads are working in Ruby at Access Development, which is what they learned at DevPoint Labs. Have those bootcamp hires had to learn new languages or technologies?

Yeah, they have. We’ve used a number of different tools in the development of our mobile application. Because it’s a hybrid, we’ve had to do some native development. So there was some xcode and Swift work they had to pick up, along with some new technologies from some of the authentication infrastructure we have in place for OAuth. They seem to be adapting very well.

How do you make sure these new hires are supported in their learning and growth at Access Development. Do you have a mentorship or onboarding process in place?

We do. We have a formal and an informal process. When somebody new comes in, we assign them one of our existing developers as their mentor. That mentor, along with the manager of their team, is responsible for getting them up to speed, familiar with our business, immersed in the code base, and helping them understand our approach to continuous delivery.

One of the first things we have new hires do is jump in and write more automated testing, to help them really understand the underlying code in applications we develop, and then from there we give them increasingly challenging assignments to get in and provide feature functionalities. They come up to speed pretty quickly.

Do you have a feedback loop with DevPoint Labs? Are you able to influence their curriculum if you notice your developers lack knowledge in a certain area?

There’s no formal feedback loop yet, but our DevPoint Labs folks are pretty active in the community. So there is some informal feedback going on there but nothing direct.

Will you hire from DevPoint Labs in the future? Why or why not?

Yes. The experience we have had so far has been really favorable, we’ve had nothing negative. We really have a desire to hire beyond the students who have joined our team so far.

Interestingly enough, we had three people working in various roles within Access Development, who were not developers, and they left a month ago to go DevPoint Labs’ 12-week bootcamp. One of them is on a leave of absence. The other two said, “This software development work looks exciting, we’re going to leave our positions, go to the bootcamp and then hopefully come out with a new opportunity.” If we have the need, we’d love to get them back because of their domain knowledge.

What is your advice to other employers who are thinking about hiring from a coding bootcamp or DevPoint Labs in particular?

My advice would be to look at the coding bootcamp, see if you have some relationships with anyone who has been involved with them. Leverage those relationships to validate the capability of the bootcamp, and then give them a try.

Coding bootcamps are a good opportunity to give people a chance to grow and learn, then get meaningful and gainful employment. So I think they are great hiring channel.