What is CSS: A Guide for Beginners 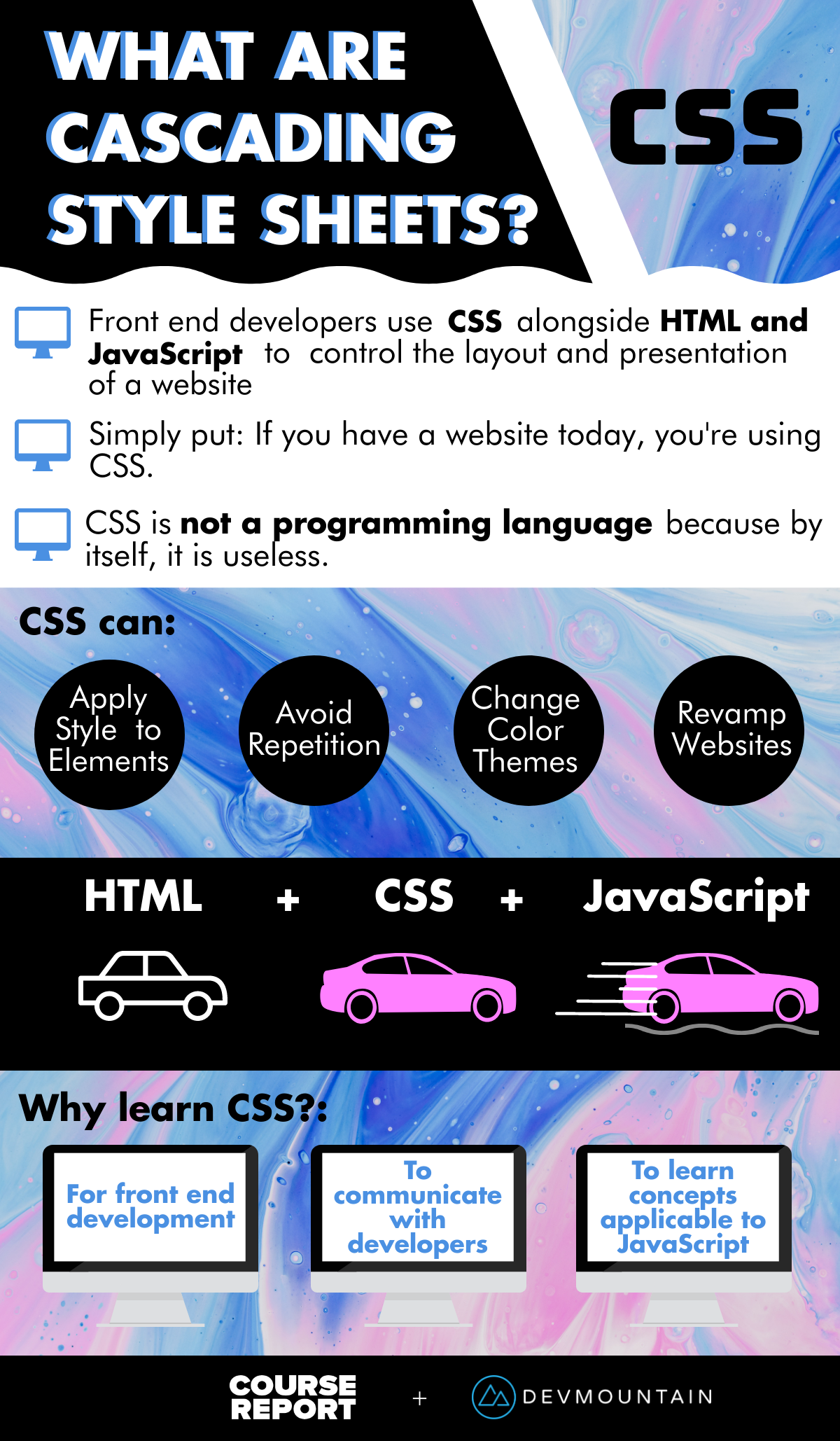 How does a website get its style? CSS, of course! But what exactly is CSS and how will you use it as a developer? Joseph Mecham, Devmountain’s Web Development Program Director, explains (in fun, beginner-friendly terms) what CSS is, the history of CSS, how it’s used by software developers, how it works with other programming languages (namely HTML and JavaScript). Plus, get a sneak peek at where CSS is heading in the future.

Where did CSS come from?

Initially, HTML wasn’t intended to be styled at all. The initial HTML concept wasn't much different from opening up an encyclopedia or perhaps reading a hand-written letter – there was really no style. The most style that you would see in this context might be in a document like an  encyclopedia, in which there’s an image, and the image occupies a certain amount of space and the surrounding text wraps around it. In its first implementation, it seemed that was all HTML was for.

Later, when people began to ask "how can I make my page look different" the answer truly was: "you don’t have much choice; it's up to the browser that you're using to determine what your page is going to look like.” People did try to achieve style using HTML, but realized early on that it wouldn’t work. Their HTML would be overloaded with attributes talking about style – and not about the actual content (i.e., style over substance).

Eventually, in 1994, Håkon Wium Lie proposed the concept of Cascading Style Sheets and first implemented it. CSS was first adopted by the browsers Internet Explorer 5 and NetScape Navigator. In our world of browser wars, if one browser supports or adopts a particular feature, then others will adopt it too, just to remain competitive. Once one browser had adopted CSS, it was just a matter of time until competing browsers got on board also.

Is CSS a programming language?

CSS does do some pretty advanced things, but it’s not a “programming language” per se, because by itself, CSS is useless. If someone were to say "look at that green tea kettle over there", it would be an easy direction to follow, but if they were only to say "look at that green…" it would make very little sense at all. CSS defines, but on its own there’s nothing to define.

Can you give us examples of companies who use CSS in their products?

Simply put: if you have a website today, you're using CSS.

Even a seemingly “unstyled” site like Craigslist still uses CSS. For reference, Craigslist is a good example of what a site without much CSS looks like.

As someone learning software development, what are the advantages of learning CSS?

You could learn HTML just fine without any CSS and that would allow you to build websites that were totally functional so far as being informational. But to have your website look any different to what the browser defaults to, you'd need CSS.

Even beyond that: element attributes such as "id" and "class"; these are really core concepts that you use regularly for CSS. They’re also crucial to using JavaScript in your website as well. What's nice about CSS is that once you’re familiarized with its core concepts, you'll be able to apply that knowledge when you move onto JavaScript.

CSS is one of the first things you should learn as a web developer: my suggested learning path would be HTML, then CSS, and then JavaScript.

All in all, knowing CSS is useful to any developer working on a website.

Using CSS on the Job

How would a software developer actually use CSS in practice?

The easiest way to conceptualize but least efficient way to use pure CSS is via inline style. It’s easy to conceptualize because you’re applying styles to elements directly as you write the HTML. You’d have an element and would write attributes specifically for that element – something like <p style="color: red;"> And what we're doing here is adding a red text color to our paragraph  element inline. However, doing it this way inadvertently fails to take advantage of one of the biggest benefits of using CSS: its re-usability.

So why is inline styling the least efficient way to use CSS?

If the CEO of a well-known beverage company suddenly wants to rebrand his flagship product. He/she no longer thinks that the ubiquitous firetruck red color works and wants to shift to maroon – starting with the product website. We’re the development team responsible for making the change.

But this is small fry. We're only talking a single page here. Let’s take it one step further (and this is your ideal CSS setup):

Besides HTML and JavaScript, are there other technologies used with CSS?

There's an application called Sketch that designers use to plan what a web application or a website is going to look like. Sketch uses CSS concepts so that when you're designing something, you can say that "I want all of my largest headings (or H1s) to have x font and x color. If you were a graphic designer ou UI designer and you were using Sketch, knowing CSS would definitely assist you.

Are there different types of CSS?

Supersets add superior ways of working with CSS. When you use either SASS or LESS, they have to be compiled back to CSS so that the browser can interpret. There are currently no browsers that can parse through or understand SASS or LESS. What’s cool is that there are features of the two that have been so helpful that inevitably I hope you'll see these features become part of CSS. It's not that different to when jQuery came out and introduced a number of great ideas that have now being part of standard JavaScript.

How to Learn CSS

Why and how does Devmountain teach CSS?

What resources would you recommend to CSS beginners?