These 10 Founders All Started at Coding Bootcamps 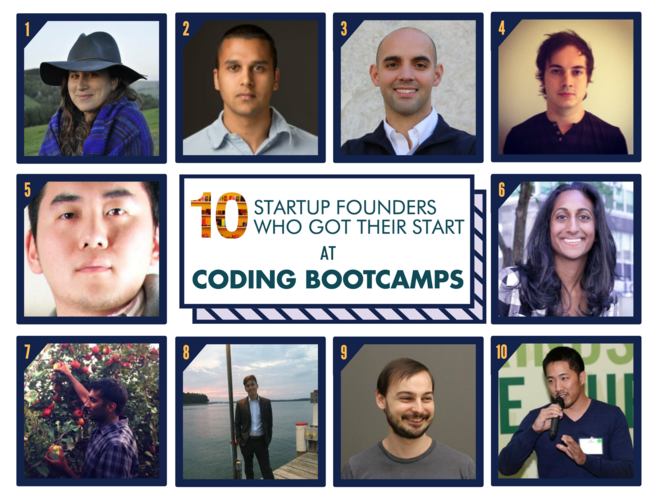 There are many reasons to attend a bootcamp- maybe you’re ready to take the plunge into a coding career or you want to update your current programming skills. Or maybe you’re part of a rising generation of aspiring technical founders and you’re ready to launch your own startup…you just need tech skills. Should you go to a coding bootcamp to start a company? Many bootcamp alumni are enjoying the fruits of their intensive bootcamp labor by choosing the path of entrepreneurship and launching their own app or website. In fact, Course Report’s latest outcomes and demographics study found that 4.3% of bootcampers attend to learn the skills necessary to start their own company. Our team loves an inspiring success story, so we’re highlighting those bootcampers who took the road less traveled, and managed to strike it big.

From seriously inspiring fundraises to crazy expansion to job-creating CEOs, check out these stories of bootcamp-alumni-turned-startup-founders, and learn why a coding bootcamp may be a wise choice if you’re looking to build your own company.

Boost Your Confidence as a Founder

Alyssa Ravasio helped get two Silicon Valley startups off the ground as their first employee before attending Dev Bootcamp in Chicago, IL. Knowing that she one day wanted to start a company, she decided to gain the coding skills necessary to build Hipcamp, a site that lets you search and book campsites. Want to know the inspiration that she received at bootcamp? During a lecture at Dev Bootcamp, Steve Huffman, cofounder of Reddit asked her, “Does it solve a problem you have? Is it a problem other people have? And will people pay you to fix it?”, she responded yes, and he proceeded to tell her, “go for it, start the company, don’t look back. If you run out of money you can always get a job later.” She took that advice and launched Hipcamp after graduating.

AJ Argrawal attended Coding Dojo in Silicon Valley because he knew exactly what problem he wanted to solve: he wanted to deepen alumni interactions. Now the CEO of Alumnify, an alumni engagement platform for universities, he’s utilizing his bootcamp experience to his advantage. AJ brought wireframes of his startup idea to Coding Dojo and was able to build out a prototype and get funded before the bootcamp was complete. He also found his CTO in his Coding Dojo cohort and is an advocate for entrepreneurs attending coding bootcamps.

Eliam Medina had the idea to make creating a legal will simple and seamless after his aunt was diagnosed with terminal cancer. After experiencing the difficulty in completing end of life affairs, he wanted to make the process easier for others. Eliam wasn’t sure he could find someone to build out his vision, so he decided to learn to code at Bloc’s online bootcamp to build the platform himself. Eliam attributes Bloc’s mentorship model as his key to success, as there was always someone available to help with any challenges he came across. Bloc’s self-paced learning took Eliam 10 days to learn programming (it normally takes others 4 weeks). He used the first part of the course to learn programming and then instead of finishing the second part of the course, he partnered with another developer and started building Willing, a free online tool that helps you make a simple will in five to 10 minutes. The team was even accepted into YC Combinator.

Build a Product with your Co-Founder

Phil Moldavski and Ricky Choi met while both working at LivingSocial and one thing was clear: Phil needed to up his sock game. Luckily, Ricky suggested a pair of bright patterned socks to wear instead of Phil’s usual white socks with black dress shoes. After enjoying the new look and compliments from wearing great socks, the two left their jobs and attended Dev Bootcamp in San Francisco to learn the skills necessary to build an online subscription sock delivery service, Nice Laundry. The two attribute their success to their education:“Everything you see at nicelaundry.com today was built by things we learned at Dev Bootcamp. Everything from setting up the staging server, to the HTML and CSS on the front end, to custom things that make the site operate in the way that it does. We were able to launch our site for free, we could set up things like our own email server without jumping through hoops, and that’s a boom to the business.”

Suma Reddy was planning her twin sister’s bachelorette party in Montreal, but needed some itinerary advice because she’d never been before. Remembering an old friend that had recently moved to Montreal, Suma reached out and was given great advice on the best things to do in the area. She wanted to further tap into the “friend-to-friend” resource of exploring and create a sharing platform, so she attended Flatiron School in New York City. “Before Flatiron School, I didn’t understand how a product was broken up into features, and how building each feature sequentially is important” Summa notes. She teamed up with two other developers Vishal Reddy and Inje Yeo to create Waddle, a friend-to-friend discovery platform that helps you find the best places to go, based on your friends’ ratings, reviews, and photos. Her startup gave her  the opportunity to present at the White House Demo Day for entrepreneurs and meet the Chief Tech Officer of the U.S!

Help Others in Need

Tristan Siegel was an aspiring archaeologist and William Jeffries was an accountant before attending Flatiron School in NYC. After finishing the bootcamp, they sought to build something that could help others, so they created Heat Seek NYC to address the need for livable heating in NYC’s lowest-income apartments. Did you know that landlords could lower the heat far below room temperatures to save money and drive out poorer tenants? Heat Seek NYC provides heat sensors for tenant apartments to help validate claims against landlords with the data. The project garnered attention from top city officials and housing advocates, especially after presenting their idea at New York Tech Meetup.

Stephen Foung attended The Firehose Project’s online bootcamp to learn code while finishing up his MBA at Babson College in Boston. After finishing at The Firehose Project, he launched Clevertree in Sacramento, CA, an online medical marijuana delivery service (and yes, they deliver in under an hour). The app connects medical marijuana suppliers (collectives, dispensaries, etc.) with medical marijuana patients. Stephen reveals his appreciation for his bootcamp experience- "I don't think I would have been able to successfully create CleverTree without going through The Firehose Project. I worked 1-on-1 with the co-founder of the company, Ken Mazaika, on building the app. Ken also taught me to code in a really unique and fascinating way. I don't think you get that type of personalized, expert teaching from any other bootcamp.”

When you attend a coding bootcamp to build the skills necessary to start or enhance your venture, you’re coming in with a different mindset. You have goals to achieve that reach far beyond simply learning to code, as you’re learning in order to improve your technical and leadership skills. Be upfront with your bootcamp and cohort about your motivations for attending so that everyone around you can connect you to beneficial resources.

If you know you have an idea and you’re ready to start creating it, a coding bootcamp may very well be for you. These immersive tech courses will not only give you the right mind frame to rethink your business ideas and create a product worthy of selling, you will be surrounded by a community ready to help push your ideas to live products. If you’re an entrepreneur ready to utilize tech skills to enhance your business, you will be engaged in a community ready to help you solve problems specific to your needs. Have you graduated from a coding bootcamp and started your own business? Share your tips in the comments!