A Beginner’s Guide to Python for Cybersecurity 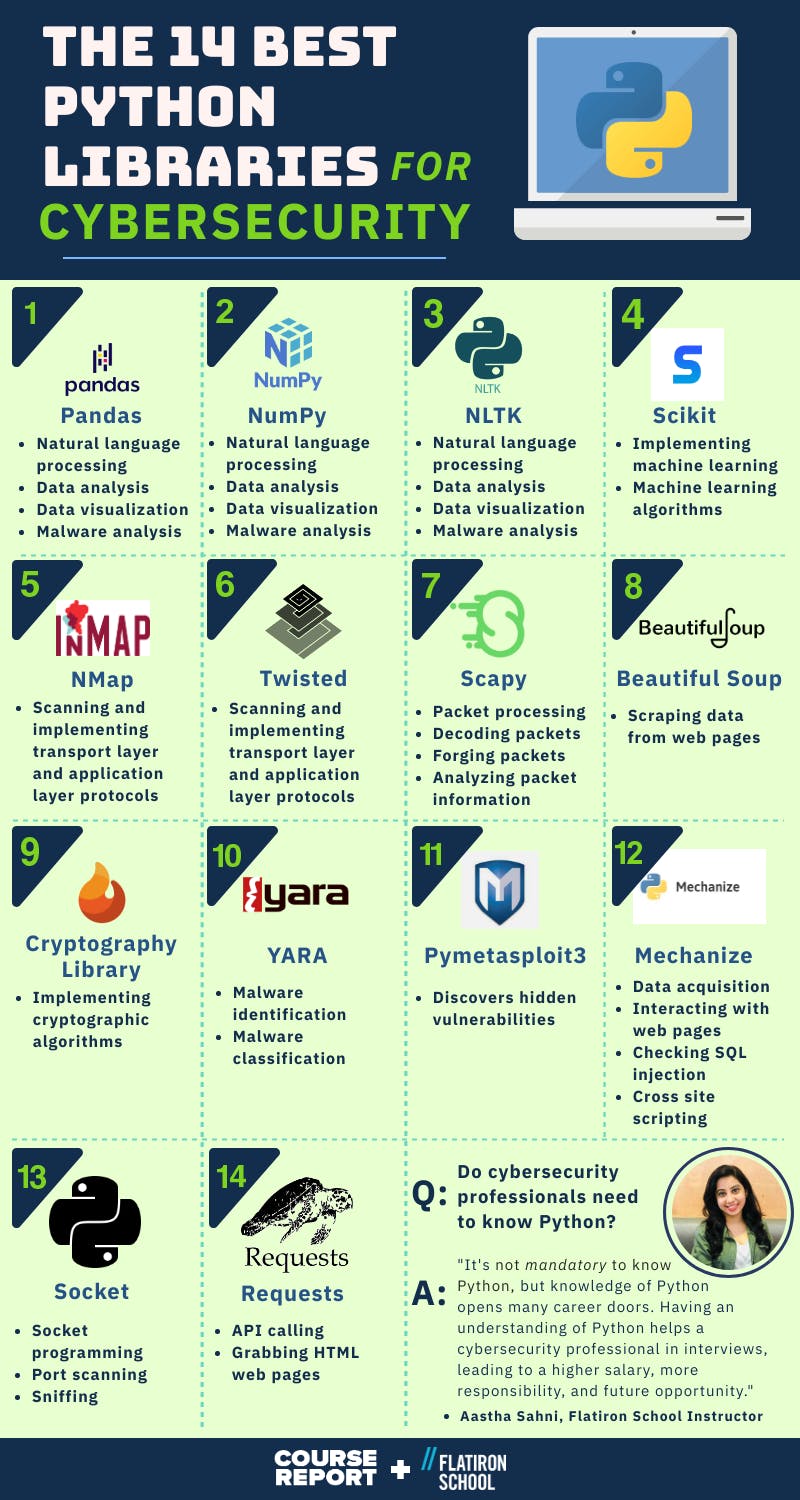 You may think of Python as a data science programming language, but did you know that Cybersecurity Engineers heavily rely upon Python? From penetration testing to automating security processes, Python has become an in-demand skill for today’s cybersecurity professionals and Flatiron School Cybersecurity Instructor Aastha Sahni joined us to explain how Python is used on the job. Find out which Python libraries and frameworks are most popular amongst cybersecurity experts, and how to learn Python for cybersecurity at a bootcamp like Flatiron School!

Python is a free, open-source programming language that has a heavy focus on code readability and indentation. Python is accessible and modifiable, and can be used to design and customize web applications, for scientific computations, artificial intelligence, and data science. Python is an interpreted language, so when you run Python code, it is automatically converted into machine language. This is unlike other languages, like C++, which need to be first compiled and then interpreted.

Python is easy to learn, code, run, and read, making it a high-demand skill to possess. All of this makes Python the easiest, most used programming language in tech, including in cybersecurity!

How Python is Used by Cyber Security Analysts

In cybersecurity, Python is used to:

A cybersecurity analyst uses Python scripts to automate tasks, such as implementing penetration testing. A large number of cybersecurity applications and tools are based out of and heavily rely on Python, which means they can be customized according to individual needs and requirements.

As an entry-level cybersecurity professional, it’s not mandatory to know Python, and there are so many domains in cyber which do not include the usage of Python every day. However, it's always helpful to know the basics of Python. The biggest benefit to knowing Python for cybersecurity is the ability to write scripts. Writing and developing scripts becomes very easy as it supports minimal code and extensive use of libraries.

Cybersecurity engineers are more involved with development, architecture, and customizing, which include understanding complex data structures, and may require a more intermediate-level understanding of Python. If you're aspiring to be a security engineer, where you're creating a custom tool or app, you are required to know an intermediate-level of Python.

Basic knowledge of Python opens many career doors to perform a variety of roles, not only in cybersecurity but in other areas, like data science. In addition to basics, having an intermediate-level understanding of Python will definitely help a cybersecurity professional in interviews, more responsibility, and future opportunities.

The Top 14 Python Libraries for Cybersecurity

The Python libraries most widely used for natural language processing, data analysis, visualization, and more are NLTK, NumPy, and Pandas. These libraries are also used for malware analysis.

Scapy is used for packet processing, decoding packets, forging packets, and analyzing the packet information on a network.

Beautiful Soup is widely used for scraping data from web pages in the form of HTML and XML.

Cryptography Library is used in order to implement cryptographic algorithms, specifically for the purpose of securing something, such as a file, communication, etc.

YARA is widely used for malware identification and classification.

Pymetasploit3 is a library where you can use the Metasploit framework for discovering hidden vulnerabilities.

Mechanize (which is similar to Beautiful Soup) is used for data acquisition and for interacting with and getting data from the web pages. Mechanize is also used for checking SQL injection and cross site scripting.

Example of Python Script for Automation in Cybersecurity

How is Python used in Pen Testing?

Someone performing a pen test is performing whatever an attacker would do. There are seven stages of penetration testing, and at every stage except for the first pre-engagement stage, there are a variety of Python libraries that can be used:

How do cybersecurity analysts use Python during a cyber attack?

There are a few Python libraries and frameworks that cybersecurity experts rely on when under a cyber attack:

With the help of Python, cybersecurity experts can also create play books, which can automate analysis, from analyzing to creating the ticket for the incident response analyst.

How to Learn Python for Cybersecurity

Flatiron School teaches Python in the Cybersecurity Engineering Bootcamp. In the bootcamp, there are labs dedicated to Python, where students get hands-on experience while solving tasks. We use Python while developing various scripts and pull for cryptographic algorithms. Cybersecurity engineering bootcamp students also utilize Python in other courses, like cryptography. Not only do students learn Python at Flatiron School, they also learn how it is practically applied in cybersecurity.

For those looking to test their Python skills, Python’s website contains so many libraries and detailed exercises.