Pandas in Python: A Guide for Beginners 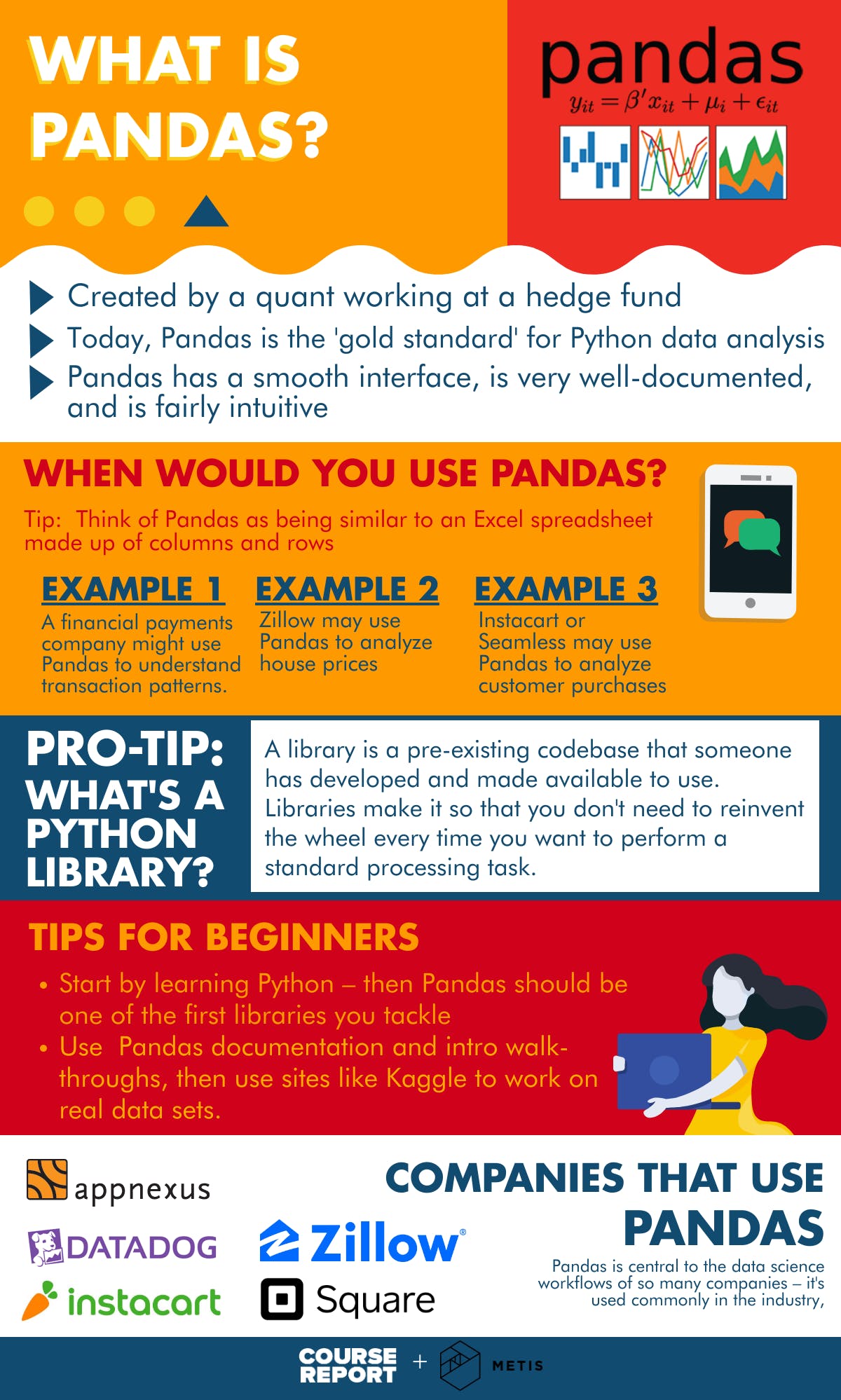 In learning data science, you’ll soon discover that your skillset doesn’t end with Python –  there are a number of other tools you’ll need to grasp. One of those is Pandas, a Python library which facilitates data processing. We asked Joe Eddy, Senior Data Scientist at Metis’ Data Science Bootcamp to explains what Pandas is, how data scientists and real companies are using it, and how beginners who want to learn Pandas can start dabbling on their own.

Why does Pandas exist and where did it come from?

Pandas is a catch-all Python library; a resource for doing data analysis and manipulation; any kind of data processing, analyzing, filtering, and aggregating. Pandas can be used for just about any process where you're trying to gain insight from data using code.

Pandas was developed by someone working in a quantitative role at a hedge fund called AQR. He was writing a lot of data processing scripts and doing a lot of it from scratch. He realized that it would be very helpful to himself and other people if there was a more standardized and systematic library for running these types of processes, and so he started developing the library and made it an open-source package. In the last few years, Pandas has caught on as the golden standard for Python data analysis.

What is a Python library?

Python, as a programming language, lets you do a set collection of operations and fairly low-level things. Any library is a pre-existing codebase that someone has taken the time to develop, and has made available to others to repurpose (essentially code work that someone else has done and shared, so that you don’t have to.)

Libraries use the lower-level operations of a coding language to build a more sophisticated program that operates in a more specialized or efficient way, or to build an interface for doing some kind of common processing task – allowing the programmer to abstract away the specifics of the lower-level processes that are happening. Libraries leverage these lower-level building blocks to build up more high-level functionalities. A library can also work in tandem with other libraries. Libraries make it so that you don't have to reinvent the wheel every time you want to perform a standard processing task.

For those coming into data science with perhaps a background in Excel (or a similar analysis tool) it might be helpful to conceive of the central building-block of Pandas – the dataframe – as being similar to an Excel spreadsheet made up of several columns and rows storing different related data points.

Here are a couple of examples:

Are there any specific technologies that often get used alongside Pandas?

Yes, definitely. The two biggest ones are NumPy and scikit-learn; both of which are also Python libraries.

What alternatives are there to Pandas?

In Python, there's no real clear alternative to Pandas.

Outside of Python, you would find the main parallel options. For example, some people who work with R use a library called dplyr. I believe it's a similar idea to Pandas: a data manipulation library that makes certain types of functionalities easier and faster. While I haven’t used it myself, there's also something called Alteryx, which I think is used to set up data formatting pipelines. I think that that suite of technology is the main set of alternatives.

Companies that use Pandas

What sort of companies might need their data scientists to use Pandas for analysis?

Just about every company using Python for its data analysis would require Pandas, simply because of its versatility.

Do you have any examples of specific companies that use Pandas?

Again, just about any company that I can think of uses it. Some examples are:

The list is endless. Any company doing data science in Python is probably using Pandas.

Why is Pandas “the golden standard” for Python data analysis?

The real reason that Pandas is so popular now is probably because it was the first library of its kind. Being the first of its kind and open-source (theoretically anyone can contribute to making it better), more and more people became invested in it. I think that because it was really the first Python library that served this function at scale, it just became very popular.

Aside from that, I'd say that it is just a really nice library: it has a very nice interface; it's very well-documented; it is fairly intuitive to use (once you get past the initial learning curve), and it leads to a coding style that feels fairly natural once you're comfortable with the package.

Overall, I think its popularity is due to the fact that it fits within Python, which is a popular language.

Is Pandas a useful library for beginner data scientists to learn? If so, why?

Pandas would be the next library that I would suggest a beginner learning, after learning basic Python. The reason being, that it opens the door to any data work that you want to do. If you want to work with a data set, try to understand it, format it, and extract information from it, then the easiest way will be with Pandas. And that type of information extraction (actually working with data) is what I think that you should aim to do when starting out as a data scientist; to get used to working with the data as quickly as possible.

I’d be remiss if I didn’t also say that a lot the job of a data scientist is spent purely on cleaning and processing data, and getting it into the right format to do a downstream analysis or to build a downstream model. Being that such a big part of the job, you should spend ample time on the packages that allow you to do that kind of work – and that’s exactly the role Pandas plays.

Are there any disadvantages to learning Pandas?

No, none that I can think of. But I do think that if someone tried to learn Pandas too quickly, before they had a strong grasp of Python, that they might end up taking some shortcuts that might stunt their understanding of Python syntax:

How hard is it to learn Pandas?

You’ll need a good amount of Pandas practice to become comfortable with those, but I think that with a reasonable amount of time, it’s not too hard to do.

Why does Metis teach Pandas?

Pandas is central to the data science workflows of so many companies and so commonly used in industry, that our graduates really should have a very strong grasp of it, if they want to be able to do the job effectively. It’s the sort of thing that will easily come up in interviews and take-home challenges where a student would be asked to take a data set; run some analysis and maybe build a model with that data set. I think pretty much any company would expect that a student using Python would use Pandas to do that analysis.

How does Metis teach Pandas?

Our curriculum revolves around projects and developing a project portfolio. Students begin using Pandas the very first week, and use it throughout the rest of the course - in pretty much every project worked on.

What kind of jobs require knowledge of Pandas?

Any job title in the data stack that you can think about in Python would probably require Pandas: a data engineering role, or a data analyst role, and for sure a data scientist role. Analyst and scientist roles would heavily leverage Pandas. Even if you’re not doing something like statistical models or machine learning, you still want to be able to use Pandas to:

Pandas is pretty monolithic in terms of any data application that’s using the Python technology stack.

How can beginners get started learning Pandas, and what resources do you suggest?

I’m a firm believer in applying Pandas as early on as possible. Here are some resources::

My greatest recommendation for learning Pandas is this: use it on your own project. This is the best way to learn Pandas.

Did you know that Metis’ immersive program is now offered live online? Find out more and read Metis reviews on Course Report. This article was produced by the Course Report team in partnership with Metis.