Learning to Code with a Humanities Background: Is it Possible? 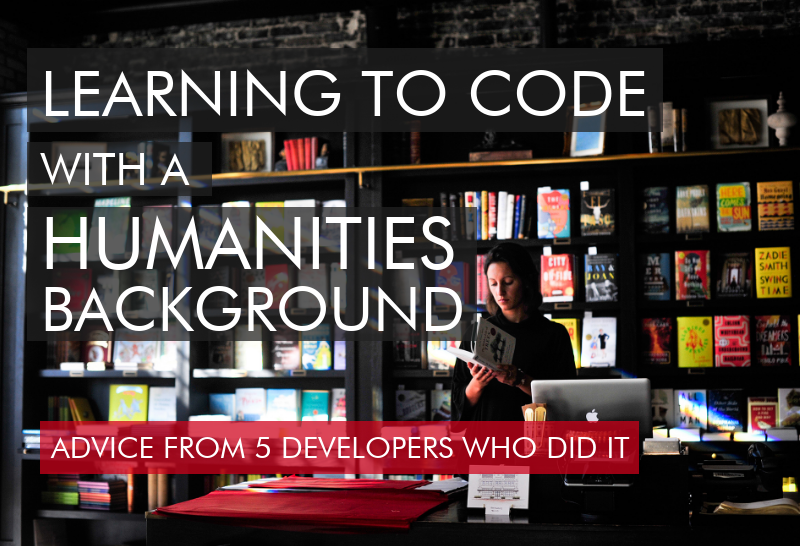 "Can I be a programmer if I'm not a math genius?"

This is a question we see and hear all the time. The assumption is that a successful coder should have a computer science degree or a lifelong love of math and sciences- not the case! Bootcamp students come from a wide range of past lives, with many having started with little or no technical expertise, and some having spent years in seemingly unrelated careers. In fact, the skills learned in Liberal Arts (critical thinking, creative problem solving etc) can often make for a stronger, more well-rounded developer! As former Dev Bootcamp instructor Sherif Abushadi confirms, "someone with a humanities background can be just as effective, if not more effective because they have an intuitive sense of what it means to enjoy using an application. If I could draw a line around our strongest students, they would be students who have somehow already stretched their learning muscles- they’re graduates of a PhD program, doctors, lawyers."

From poets to copywriters to PR pros, we look at advice and reflections from bootcampers at top schools like Turing, Code Fellows, Launch Academy, Coding Dojo, Hack Reactor, and Dev Bootcamp who made the transition from the humanities to programming.

David (Code Fellows) “I came out of my undergrad with a background in humanities: I was an English and Spanish major, and I worked as a copywriter and copy editor for a couple of years after graduating.”

How Humanities Sparked my Interest in Coding: “ I started dabbling in HTML on the side. Eventually, I took a part-time internship with a startup here in Seattle (Zipper Computer), caught the code bug, and realized I’d like to make this career switch. When Zipper closed up, I was looking for a good next step. I’d been hearing about Code Fellows for the past year, and I was finally at the level to take that plunge.”

Miriam (Turing) “I was an English major in college, and after school, I had a lot of different jobs; I was even a chef at one point. At my last company, I started as the executive assistant but I was interested in marketing so I ended up moving into the creative department and copywriting emails and social media for digital campaigns.”

How Humanities Sparked my Interest in Coding: “My company needed somebody who could code mobile responsive emails so I taught myself how to do that and realized how much I enjoyed it. I began my journey learning to code from a variety of online platforms: Treehouse, Code School; I also started Tealeaf Academy which is an online bootcamp but that didn’t really work out.”

Lance (Coding Dojo) “I’ve been an artist and a writer for a long time. I spent most of my twenties travelling around the country doing spoken word poetry and I self-published a book. Then I was trying to reinvent myself as a futurist commentator and author and I was going to do a podcast for a while about technology and futurism. Eventually I found my way to the bootcamp and I thought learning how to program would be a really good fit for all the things I wanted to do.”

How Humanities Sparked my Interest in Coding: “My basic feeling is that in the future people will mostly be replaced by robots so the only sensible thing to do is to learn how to program so that you can be one of the people that program the robots that replace other people – which is kind of a half-serious answer. I wanted to be better able to talk about technology so I can further my interest in writing about technology. I also wanted to be able to make my own apps and programs. Other than that, I just wanted to develop a skillset that would take me places in the future; that I had room to grow.”

Julissa (Launch Academy) “I went to Simmons College, a liberal arts school, and got my degree in Journalism. After graduating, I did Marketing, PR, and content at a university working for a nonprofit. I designed fliers, posters and marketing materials. After about a year and a half, I realized that I didn’t feel fulfilled working in a communications job.”

How Humanities Sparked my Interest in Coding: “About six months into my job, my bosses decided we needed a website redesign. Our site was built on Wordpress and was pretty ugly; of course since it was a nonprofit, we did not have the money to hire someone outside. I was in charge of the redesign so I taught myself some super basic PHP because we were running on Wordpress; some HTML, CSS and a tiny bit of JavaScript. I realized I was having a lot of fun with it because I was actually building something from scratch instead of using someone else’s tools to do it. That was my first foray into programming.”

Bernard (Hack Reactor) "I studied humanities in college because that's what I was good at, and I wanted to go to Law School, so it was a great choice at the time."

How Humanities Sparked my Interest in Coding: "During one of my internships, a lot of lawyers told me not to go to law school. So I started looking for different alternatives. I had friends working in tech who had a great work-life balance and loved what they did, so I started looking in that direction."

Lance (Coding Dojo): “I think companies want more well-rounded characters; you have a lot of different experiences to bring to a job, and communication skills. I’m a good writer and I’ve got good reading comprehension skills. Doing development is a lot of research and documentation and sometimes it can be pretty thick so a lot of it is about reading, comprehension and communication.”

Bernard (Hack Reactor): "Some people think that it's hard to transition from a humanities background to a tech background. But at the end of the day, your ability to think critically really helps in making that transition. Steve Jobs talks about seeing himself at the intersection of tech and humanities. That's inspiring for anyone who doesn't have a STEM background to go down this path."

Laura (Dev Bootcamp): “I think there’s a benefit to having an English degree. There’s no harm in being able to verbalize and communicate well. A lot of people don’t see the correlation between English and coding, but code is just another language. The parallel between sentence structure could be loosely correlated with lines of code.”

Lauren (Dev Bootcamp): “You see the attention to detail; you’re trained in critical thinking. In a liberal arts education, you spend a lot of time making connections between different theories and texts- I think it’s very helpful for people to have that sort of training. In programming, you’re making similar connections but with a different toolset. I think people who have an artistic background, particularly people who have been through things like workshopping, are able to self-edit, listen to others and incorporate their feedback.”

Short answer: yes! Sure, the highest salaried bootcamp grads studied Engineering and Mathematics in their undergraduate major (Engineering students earn ~$91,000/year after bootcamp and Mathematics students earn ~$87,000/year). But Anthropology and Physical Science majors see the most drastic change in salary after graduating from a bootcamp. And take a look at some of these stats: