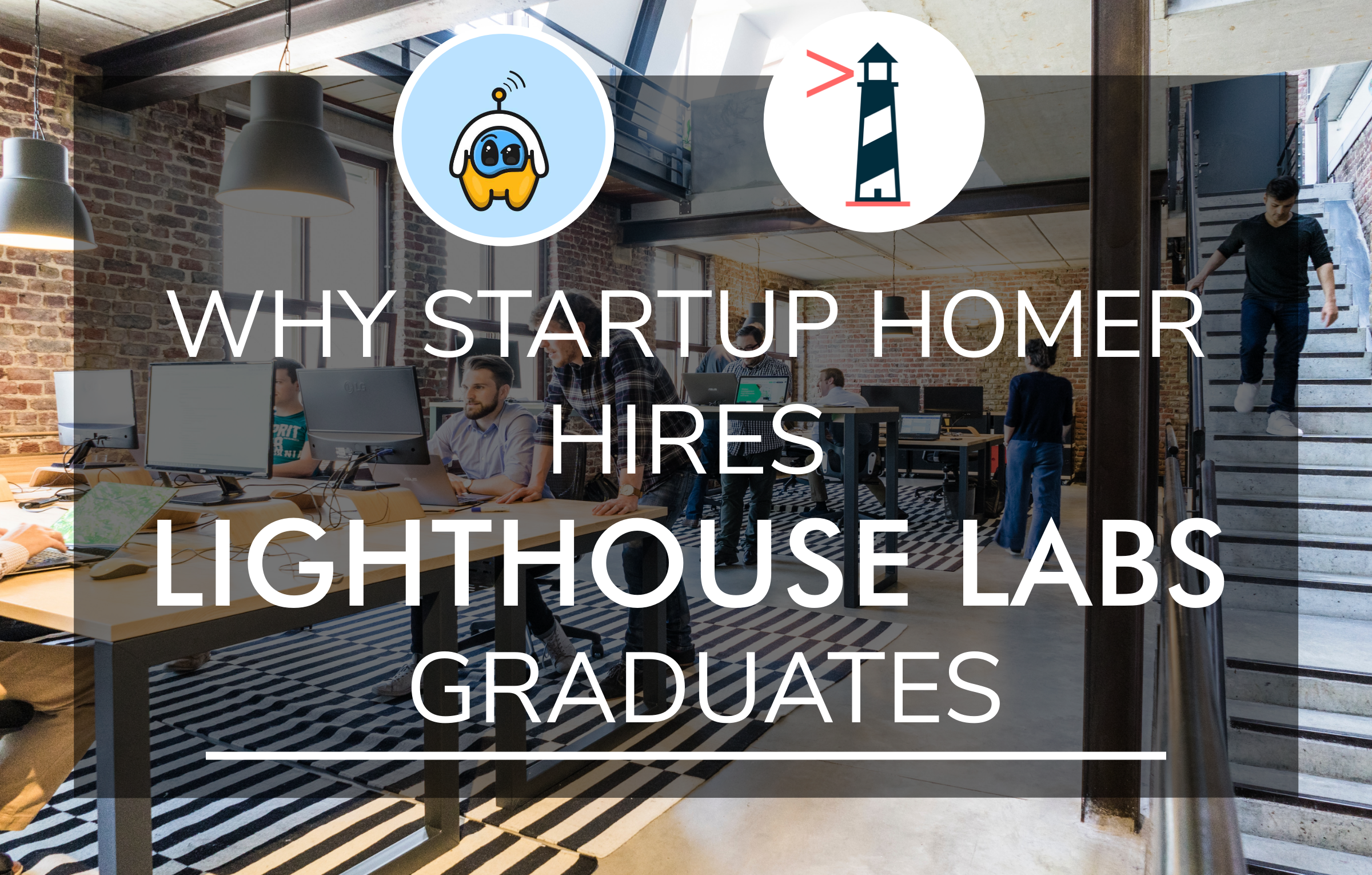 Vancouver-based startup Homer has hired two Lighthouse Labs bootcamp graduates to work on its smart technology for finding housing. We spoke with Founder Jacob Steiner to find out why Homer is hiring bootcamp grads, what their hires are working on day-to-day, and how hiring from bootcamps like Lighthouse Labs gives startups access to more diverse applicants. Plus, Homer collaborates with Lighthouse Labs on their 21-Day Coding Challenge!

Tell us about Homer – what problem do you solve?

Homer is a smart robot for smart renting. Homer is built on top of Slack and uses technology to help teams find housing (ie. your office relocates or opens a new office). We designed Homer specifically for tech companies like Amazon and Microsoft. We found that HR managers at tech companies were having problems coordinating mass relocation efforts. The people we focus on helping are renters and real estate professionals as a byproduct of all of the data we're generating through interactions.

How many Lighthouse Labs graduates have you hired so far?

We've hired two Lighthouse Labs graduates as Software Developers at Homer – Angela and Mandy. Right now, we have six team members and we're looking to grow to 10-12 by May. We've been to alumni events, demo days, and graduation ceremonies at Lighthouse Labs. We also partner with Lighthouse Labs on their 21-Day Code Challenge.

It’s cool that you partner with Lighthouse Labs in so many ways – so what is the 21-Day Coding Challenge and how is Homer involved?

The 21-Day Coding Challenge is a great way to get people involved in the tech community. The challenge is for nontechnical people or technical people. If you’re non-technical, you can get exposure to coding; if you’re already technical, then you can practice things you already know. Most of these challenges won't take more than a lunch hour.

We have taken a collaborative approach with Lighthouse Labs to market this challenge. Our Lighthouse Labs hires Mandy and Angela are currently exploring how to become mentors. It's cool to be able to remove technical barriers that people think exist. Almost every company these days is a tech company in some way, but not everybody feels like they can understand the tech.

What do you look for in technical new hires?

We're looking for a willingness to try new things. Beyond their technical ability, we want to see people who are learning and collaborative, people who have capacity to grow. We're looking for people who are hungry to be in a real startup environment. This past year, we were focused on rapid iterations of our core product and the skills that we saw in the Lighthouse Labs graduates lent well to that.

We had an open role that was focused on more experimental product ideas and I found that when we went to the Lighthouse Labs demo day, their students were remarkably creative. Their students were executing their own original ideas for their final projects rather than performing theoretical or clone projects that we found at some other, larger institutions.

How did your Lighthouse Labs hires do in the technical interview at Homer?

Lighthouse Labs graduates are certainly highly desirable in the Vancouver tech community. We've visited a few other bootcamps. I won't knock other bootcamps, but I appreciate that Lighthouse Labs focuses on team projects. We are fortunate to have hired two people who did their final project together. I wanted to hire all three of the people that worked on their project! They had the cohesion of working together for the duration of bootcamp and that transfers well.

When I compare Lighthouse Labs grads to more traditional applicants, the bootcamp graduates were more willing to communicate. They asked questions about their coding challenges whereas most graduates from post-secondary schools would take the coding challenge home, do their best, and come back with that. The communication skills were a good sign for us because we were looking for culture and personality. In a startup, it's crucial to have a good technical fit and a good culture fit.

Have you noticed differences in hiring from a bootcamp versus working with recruiters or colleges?

I see more diverse backgrounds with bootcamp graduates. One of our Lighthouse Labs graduates was previously in an accounting role, and the other was a technician at a walk-in clinic before. They don't always understand the specific technology as deeply as someone with a full Computer Science degree or someone who's been in the industry for a while.

What are your Lighthouse Labs hires working on at Homer? Are they using the programming languages that they learned at bootcamp?

They learned JavaScript, React, SQL, Node.JS and Ruby on Rails at Lighthouse Labs. They're still using all of those languages here at Homer. We also introduced them to Python, mostly to show them how we think about using different frameworks for a conversational interface. It's a challenge, regardless of your education, to think about how to turn a function into the way a chatbot speaks or reacts to somebody. That kind of thing is not exactly taught in schools yet – it’s learned on the job. The next major update that our grads are working on will expand our core product into new cities, like Calgary, Edmonton, Victoria, Nanaimo, and Seattle. The original product was only in Metro Vancouver and soon we will be able to see regional patterns in our data.

How have your Lighthouse Labs hires grown as engineers as they’ve been working at Homer?

Lighthouse Labs provides ongoing mentorship for their graduates. They also have a Slack group that alumni stay in after graduating. I don't think that we could have made it this far without the team at Lighthouse Labs. Nima, a Lead Instructor at the Vancouver campus until recently, has been crucial in getting our bootcamp graduates the support that they need. Here at Homer, we meet regularly, one-on-one, to check-in and set goals.

Promotions are not a big part of the startup culture, especially at Homer because we're small. We’re currently looking to hire more senior developers, and hopefully, that will help our bootcampers level up even further.

The Vancouver tech community is small but growing. It still feels young, but it was the right time for us to start a tech company here. Our core product is built on Slack. Being a small tech community, we were able to get the head of Slack’s app directory to meet us for coffee. I've even gotten connected to someone from Microsoft's local team that supports startups just by messaging them on GitHub! They met with me and we've since been working together.

What's your advice for other employers thinking about hiring from a coding bootcamp?

Research and consider all of your options before making a decision. The biggest part of hiring from a bootcamp, or hiring at all, is doing ample research. Sometimes, people get a ton of funding and hire before they need it. It might not be viable to hire a bootcamp grad immediately – it depends on the stage of your company. Definitely look at all of your options before you jump. As a company, we definitely discussed the decision to hire bootcamp grads to make sure it was the right move for us. We weren't concerned, but it was certainly worth considering where our applicants were coming from.