Why a UI Designer is Not a UX Designer 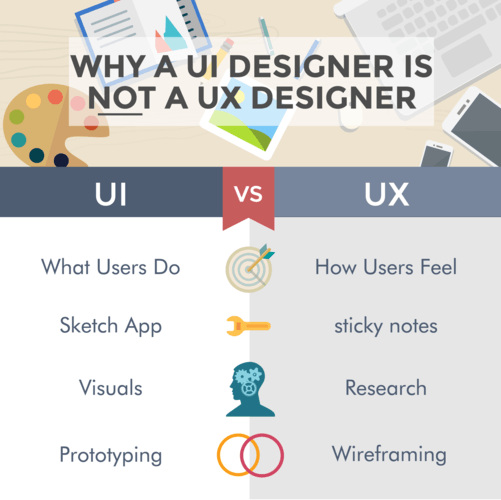 UX? UI?  So you’ve seen the acronyms everywhere, but now you’re wondering what exactly is the difference between the two terms? And to make it even more confusing, just what is a UX/UI designer? Some kind of unicorn hybrid? While some people tend to group the two positions in the same boat, they’re actually separate disciplines that both share a common goal of creating a product that is centered around the needs of its users. But just how does the role of a UI designer differ from that of a UX designer?

To understand, let’s break down what exactly are the differences and what are some overlapping roles of the two positions.

By definition, User Experience (abbreviated as UX) is how a person feels when interfacing with a system. The system could be a website, a web application or desktop software and, in modern contexts, is generally denoted by some form of human-computer interaction (HCI).

What a UX designer does

User Experience (UX) design encompasses every part of the design that involves how the user will interact with a product. They are concerned with how a user feels about a product. Empathy for the user is at the core of their job description. A user experience designer conducts research to better understand the goals and desires of the people who they are designing for. UX designers then use the research to create a journey for the user as they complete their tasks. They do this through things like:

Tools of a UX Designer:

User Interface (UI) Design focuses on anticipating what users might need to do and ensuring that the interface has elements that are easy to access, understand, and use to facilitate those actions. UI brings together concepts from interaction design, visual design, and information architecture.

What a UI Designer Does

Why a UI Designer is not a UX Designer

A UX designer might be great at performing research studies to learn more about the user, but they may lack the skills necessary to prototype a complex screen animation to hand off to a developer.

UI design requires that the designer has a better understanding of hierarchy, color, typography, motion graphics, and interaction design.

While some aspects of UX and UI will share common similarities, what’s expected of each role is very different.

UX designers will be spending most of their time researching and analyzing data in order to build a user’s emotional journey while using a product. The UX designer is concerned with how the product will meet the goals of the people that will be using it.

UI design skills are focused on the creation of the visual assets for digital products, instead of the analytical skills required by user experience designers.

Where the Roles of UX and UI overlap

UI Designers are in charge of designing each screen or page with which a user interacts and ensuring that the UI visually communicates the path that a UX designer has laid out.

Now, these two roles do have a bit of overlap. In fact, a great UI is one of many aspects of good UX design, you can’t really have one without the other!

UX and UI designers must communicate throughout the entire development phase, especially when getting feedback from users.

Both jobs require designers to:

But the most important thing about the two disciplines is that for both, everything stems from knowing your users, including understanding their goals, skills, preferences, and tendencies.

UI design is everything that a user will see and interact with on a digital screen.

UX and UI designers work closely together on separate tasks to build a product that achieves the goals of the users. Without a well-crafted interface, it wouldn’t matter how accurately the UX designers understand the need of their customers. That being said, a beautiful interface can’t save a product that hasn’t been thought through for the intended users.

For a more in-depth look at how to become a specialist in either of these dynamic fields, check out the CareerFoundry UI Design and UX Design courses! And read CareerFoundry reviews on Course Report.

Sean Beaubien is a freelance Visual Designer & blogger, and a UI Design student at CareerFoundry. He studied graphic design at Radford University, and is based in Roanoke, Virginia.