What is Ruby on Rails? 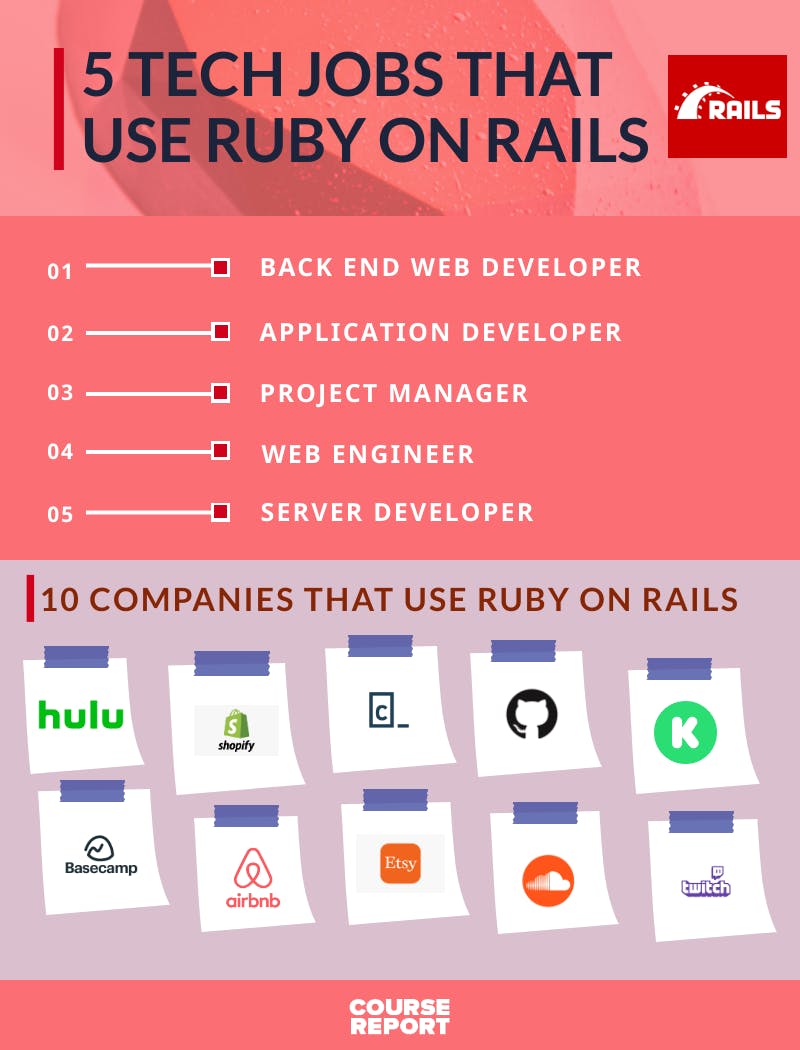 Ruby is a web programming language, so it interacts with the internet. It is often used on the back end to communicate between web pages and servers. Ruby is a high-level programming language which means you can use it without as much knowledge about hardware aspects of computers. Ruby programming is similar in many ways to Python, but it allows programmers to explore different solutions to the same problem.

What is Ruby Used For?

Ruby is often used by web and app developers on the server-side or back end. However, Ruby is flexible and can be used for many things, including full stack development. Ruby is often paired with Rails to make developing faster.

The History of Ruby

In 1995, Ruby was released by Yukihiro “Matz” Matsumoto in Japan. He wanted a truly object-oriented language that was easy to use so he decided to create his own. Matsumoto was familiar with Python, but he didn’t believe it was a true object-oriented language and that these features were treated as an add-on. He felt that many languages are focused on how to improve efficiency for the machine, but not on the human aspects of programming. The name Ruby was used because it happened to be the birthstone of one of his coworkers.

How did Ruby get so popular?

Ruby is generally much more simple to follow and understand than other object-oriented programming languages. It tends to follow the principle of least astonishment, meaning users aren’t surprised when they learn how to do something new. Ruby is also designed in a way that allows users to explore multiple solutions to the same problem as opposed to Python where there is generally a best way to do things.

Ruby is often compared to Python and the two share some similarities. Ruby and Python are both high-level and object-oriented languages. Python and Ruby have similar syntax and they tend to be easier to understand than other languages. This makes them a good choice for beginners to learn.

What is Ruby on Rails?

When you hear someone talk about Ruby, chances are they’re referring to Ruby on Rails. Rails is a framework written in the Ruby programming language that allows programmers to quickly get their projects up and running. Rails was developed by David Heinemeier Hanson about ten years after Ruby was created. It was extracted from his work on Basecamp, a project management tool. While Ruby has a lot of flexibility, Rails has more conventional ways to get things done. You may hear this referred to as “the magic of Rails.”

You might be wondering why Ruby needs a framework at all? Frameworks provide easy scaffolding for building applications and they do a lot of the heavy lifting. A common phrase when describing Ruby on Rails is “convention over configuration.” This means that Ruby on Rails handles configuring files to save time.

One of the reasons languages like Ruby are so popular in the first place is because they are open source. This allows for rich and dedicated communities that are invested in keeping languages alive. Ruby on Rails has lost some popularity over the years because it isn’t as new or exciting, but it is still widely used and receiving constant updates.

What is Ruby on Rails Used For?

Ruby on Rails is an excellent choice for someone that wants to get a website or application up and running quickly. It’s often used to build web applications which makes it popular among startup companies. Rails handles a lot of the heavy lifting, so applications are built faster and more efficiently. You can use it to test out concepts and it’s even possible to recycle work between projects.

While Ruby has a lot of versatility compared to other languages, when it’s paired with Rails it’s a bit more limited. Ruby on Rails handles a lot of the work when you’re building a web application, but the tradeoff is that you’re limited to doing things in a certain way.

5 Tech Roles That Use Ruby on Rails

Ruby on Rails may have lost some popularity over the years, but there is still a demand for skilled developers. Ruby on Rails jobs include:

Application Developers and Web Developers are among the most common users of Ruby on Rails.

Ruby on Rails is used today by many different companies. It’s a good choice for someone looking to create applications for ecommerce, streaming, project management, educational platforms, or online libraries. Here are just a few popular companies that use Ruby on Rails.

The Disadvantages of Using Ruby on Rails

Every language has its drawbacks and Ruby on Rails is no exception. The main complaint with Ruby on Rails is that it has a slow runtime speed, which can cause issues if your website or application sees heavy traffic. Twitter used to rely heavily on Ruby on Rails before they integrated another language into the platform due to speed issues.

Another common complaint is that Ruby on Rails takes a long time to start. This might not seem like an issue, but it can cause frustrations when developers are trying to work. It’s important to note that using Ruby on Rails can greatly increase app development speed despite these drawbacks.

Ruby as a programming language allows for a lot of flexibility for coders. Unfortunately, Ruby on Rails doesn’t have as much flexibility. The same framework that allows developers to create apps rapidly also limits them somewhat. If you’re trying to create something nontraditional, it will be a lot more work.

How to Learn Ruby on Rails

Whatever you decide to do, it’s important to remember that coding is a skill that requires practice. Even after you learn the language, you will need to maintain those skills if you want to stay proficient.

Ruby and Ruby on Rails for Coding Beginners

Ruby and Ruby on Rails are great for beginners for several reasons:

A key component of Ruby is responsible coding practices. This means that Ruby’s structured language encourages you to code in a way aligned with the best standards of the industry. Learning to use Ruby can encourage new programmers to become better coders in the long run!

Resources for Learning Ruby on Rails

Codecademy offers Ruby on Rails courses for all skill levels. Codecademy offers a subscription for their service, but you can take the first 10 lessons for free. It’s a great choice for anyone who isn’t sure if coding is right for them. You can get familiar with the important concepts without having to commit to paying for lessons upfront.

The Ruby Programming Language by David Flanagan and Yukihiro Matsumoto is an excellent choice for someone looking to learn Ruby from a book. Matsumoto created Ruby and his book gives you instruction that comes straight from the source.There are also many free resources for learning Ruby. Most of these Ruby tutorials will be for complete beginners and if you want to learn more, you’ll probably need to pay. They’re still a great option for anyone interested in learning how to use Ruby!

Joseph Eaton is a freelance writer and photographer who enjoys taking pictures of outdoor action sports and writing about tech. He was born and raised in North Carolina where he currently lives.