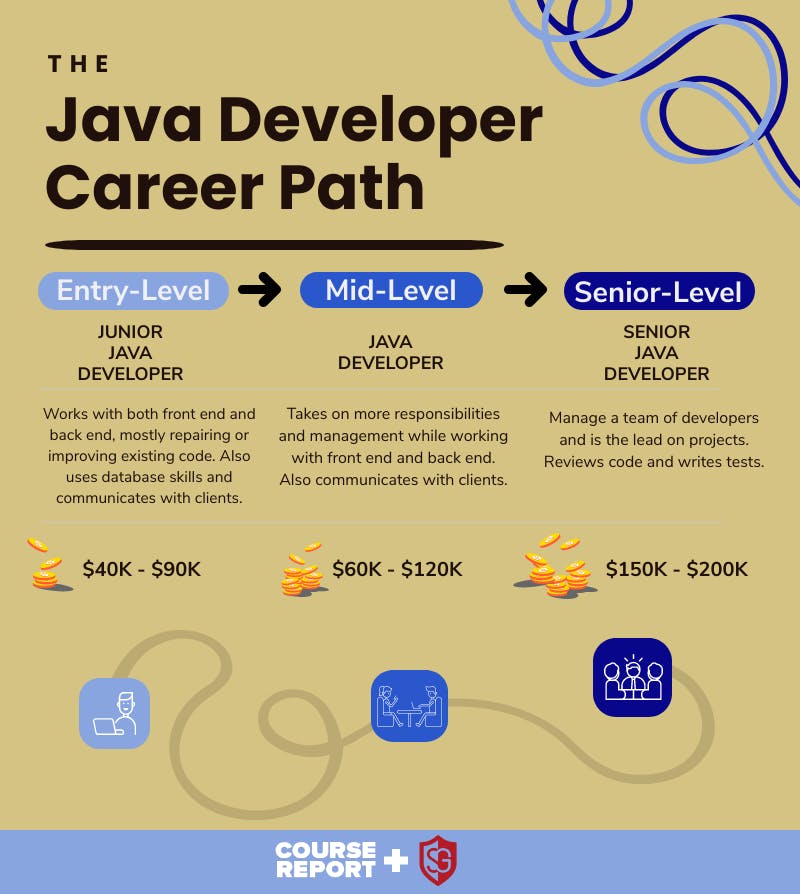 Java is a well-established programming language and learning Java can lead you into a great tech career. So what does the path look like from newbie to expert in Java development? Software Guild instructor, David Hunnicutt walks us through the job titles, responsibilities, and average salaries for today’s Java developers at the entry-level, mid-level, and senior-level. Plus, David shares insider tips on what to expect in the technical interview for Java developer roles, and how Software Guild is preparing students for their first Java developer position.

Java is a high level object oriented programming language. Java runs on the Java Virtual Machine (JVM), which means your code can run on any machine that can install Java. With other languages, if you’re writing code, you may need to recompile based on the operating system you’re using. This makes Java pretty fast and secure to use. Java was developed at Sun Microsystems and is currently owned by Oracle.

Tenacity, persistence, and a willingness to learn something new on a daily basis. The industry changes so fast that keeping up can be difficult. Nobody is going to know everything, so Google and Stack Overflow become your best buddies when you’re developing. Coworkers are also excellent sources of information.

Another trait is being able to ask for help when you need it. Nobody develops a project on their own! Rather than banging their head against the wall for a long period of time, successful Java developers know when to ask for help.

What other languages should Java developers know?

Understanding Java is certainly important, but knowing how to use JavaScript is also important. JavaScript is frequently used a lot on the front end, and a lot of technologies like React and Angular use JavaScript as their base language. For full stack development, you need to have some knowledge of how relational databases work and maybe NoSQL databases like MongoDB.

The Java career path can be broken down into three steps: entry-level, mid-level, and senior-level. Job titles are generally going to be some form of Java developer, but you may also be referred to as software engineers or programmers.

Junior Java developer is the entry-level position that most people are qualified to hold after completing a degree or a coding bootcamp. While these roles require the least amount of experience, applicants are still expected to possess solid soft skills as well as being able to program and use Java.

What does a Junior Java Developer do?

Entry-level jobs vary depending on the company or organization, but developers will be dealing with databases on the back end and how users are able to interact with an app or website on the front end. Typically, junior Java developers start working with both back end and front end by adjusting code. Most of the time, entry-level work is going to be improving or editing something that’s already out there, but some entry-level Java developers may get to build something from scratch.

Junior Java developers generally function as part of a team and they will have several responsibilities. An obvious responsibility is programming in Java, but there are others as well. It’s important to have some database skills and to be able to write queries that access the data.

Soft skills are also largely important for developers. Junior Java developers are likely to be interacting and working with customers, so they need to be able to converse with clients, explain technical issues in a non-technical way, and understand what the client wants to be able to translate those requests into technical terms for their code.

The salary range for junior Java developers is typically between $40k-$90k. Remember that salaries are highly varied and can fluctuate based on factors like professional experience, personal background, educational experience, and geographical location.

What does a Java developer do?

Mid-level Java developers can expect to see a pay bump compared to entry-level positions. A typical salary range for mid-level Java developers is between $60k-$120k. Many salaries will depend on previous experience since mid-level jobs are generally reserved for individuals who have already worked in the field for some time. Geographical location is also an important factor.

Employers looking for senior-level Java developers will generally make it clear they’re looking for someone with experience in the job listing. These roles typically require between 5-10 years of experience. These senior-level roles are usually listed as senior Java software developer.

What does a Senior Java Developer do?

At this level, employers are looking for somebody that can come in to take charge of a team and lead a project. Instead of writing more code, these professionals are reviewing other’s code. They may be doing some programming, but a lot of that is left to junior and mid-level developers. As the senior developer, they review their code. Writing an application involves a lot of testing and senior developers are the ones writing those tests.

2 Ways to Make a Good Impression in an Interview

Interviewers are generally looking for someone who can communicate clearly. Developers need to be able to take technical information and explain it in a way that a layperson could understand. Knowing your subject well is important.

A technical interview may require you to write some code. The interviewers will give you a problem and have you solve it while they watch. If you’re used to talking through code, talk through it during your interview, too. If you’re quiet, someone may ask you what you’re doing. Know that they aren’t trying to trip you up; they just want to understand your thought process. Don’t just assume you’re doing something wrong!

When I was interviewing, I usually gave candidates something that could be done in about 20 minutes. For example, let’s say you are a seller of cans of soup and each can costs 65 cents. However, I can get three cans of soup for a dollar. I would get them to calculate the cost for 2, 7, 11, 15, and 18 cans of soup.

How to Prepare for a Java Development Career

While it’s important for Java developers to have hard skills like coding and understanding the language, soft skills are just as important. Most of the situations a developer will deal with at the higher level will involve interacting with other people. It can get tense if you’re dealing with a stakeholder who isn’t happy with the way an app is progressing, but that’s the reality of working as a developer.

Coding bootcamps give students a lot of information in a short amount of time, and learning Java at Software Guild is no different. It’s similar to drinking from a fire hose where you're hit with a lot and you can only take in a certain amount. Relax and over time it will start clicking.

In the beginning, we tell our students that they just need to go through the motions and trust us. We start at the beginning with the assumption that our students know nothing about programming. We go through Java, object oriented programming, and relational databases before moving on to front end development using JavaScript. We have a Slack channel for office hours that’s manned by teaching assistants and a backup instructor. If a TA can’t answer it, the instructors jump in to help.

Is there an ideal Java bootcamp student?

That said, there are a couple of qualities that students should have coming into a bootcamp:

Overall, our bootcamp students love to code because it’s similar to solving puzzles. A lot of coding is problem-solving and once you hit errors, there’s even more detailed problem-solving. Figuring out how to build an app alone is one problem, and trying to put all the pieces together is solving many different problems.

What types of jobs do Software Guild grads land after the Java bootcamp?

Software Guild graduates generally land those entry-level developer jobs. It depends on who hires you, but our graduates may work on the front end, back end, or helping out with database work. At larger companies, our students have a mentor to guide them in the early stages of their careers.

How does Software Guild support Java developer students as they start their careers?

We set aside time for students to do mock interviews similar to a first-round technical interview. A lot of our career support is helping the students find leads on tech jobs and one of the biggest hurdles seems to be interviews. Once they get past the interview, it’s on them to keep that job. We also communicate on Slack and one of our channels is the alumni channel. A lot of alumni go on there to ask for advice or ask questions.