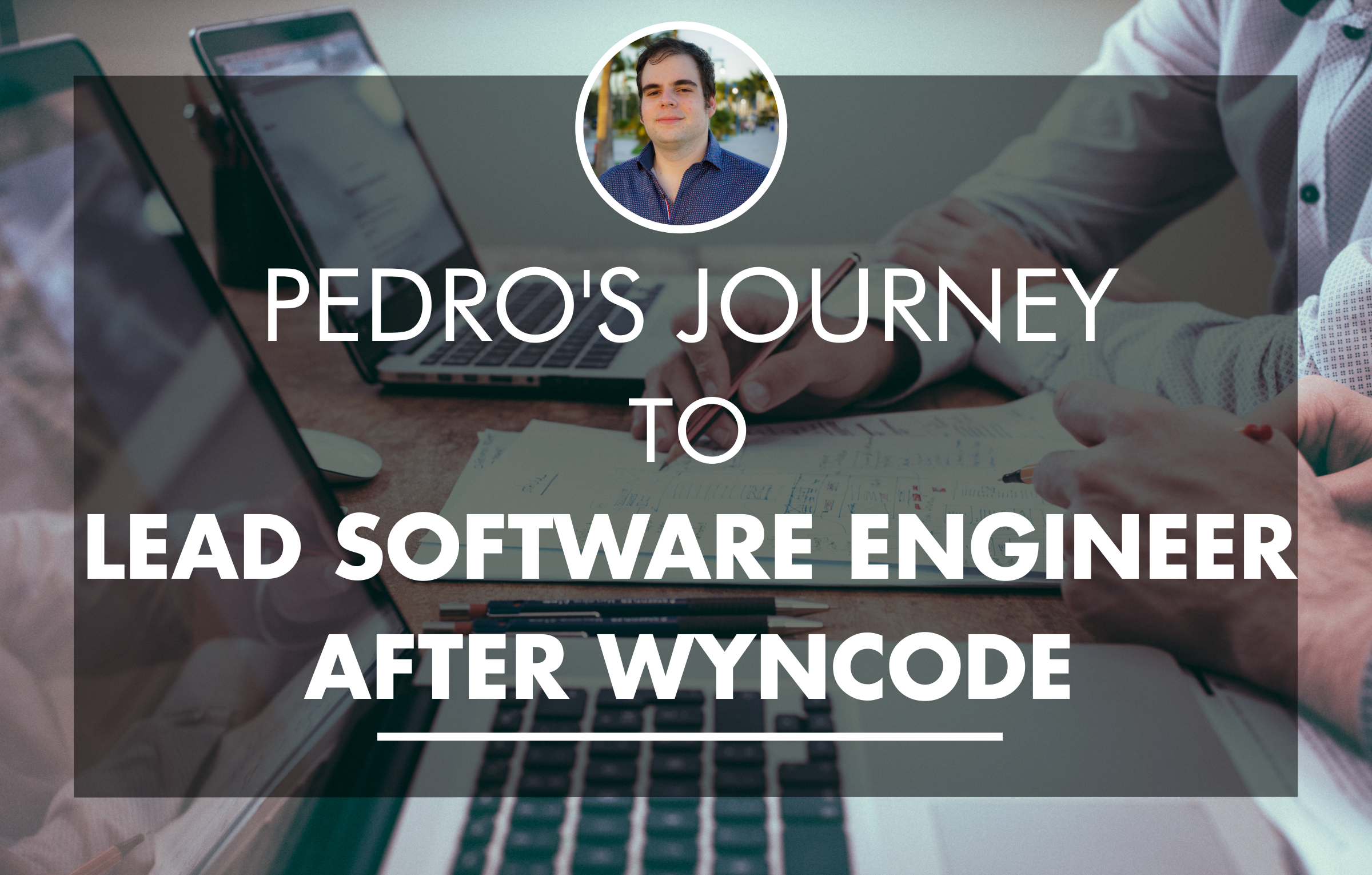 After trying out three majors, Pedro De Ona dropped out of college to attend Wyncode in Miami, Florida. He launched his own healthcare tech startup straight out of bootcamp and most recently landed a job with the massive Restaurant Brands International, the Miami-based company that owns Burger King and Popeyes. Pedro shares how Wyncode prepared him to hit the ground running, how his job search was different from the traditional bootcamp graduate, and his tips for succeeding after coding bootcamp.

What were you up to before enrolling at Wyncode?

I had a scholarship to the University of Miami and I started out studying Biomedical Engineering, but I changed majors twice and ended up studying finance while working at a law firm. I wasn't excited about it and I never finished my bachelor's degree. I then decided to stop going to school and go the coding bootcamp route instead. I had always been interested in coding as a hobby so I decided to change career paths with Wyncode.

What got you interested in coding? Did you use any free resources before you went to Wyncode?

I had some exposure to coding when I was younger. I took a summer course introducing programming on the XBox 360 video game console. It was only a 3-month course so we didn't get super in-depth but it exposed me to foundational concepts early on. I enjoyed it a lot. Later on, when I was studying engineering, I had an intro to coding. And about two months before I started Wyncode, I did a course on Udacity about Machine Learning.

Did you research any coding bootcamps other than Wyncode?

I definitely wanted to take an in-person immersive bootcamp so I didn’t look into online programs. I'd heard great things about Wyncode and they seemed to have fantastic results from what I could see online, so I didn't consider other bootcamps in the area too heavily.

How did you afford the Wyncode tuition?

I took out a private loan. I actually just finished paying it off earlier this year! I tried to apply for a Wyncode scholarship, but at the time there was only one full scholarship slot per cohort.

What was the learning experience like at Wyncode? Was your class diverse?

It was an intensive, full-time program. There was one lead instructor and about five TAs who were around day and night on campus to answer questions and help people. I'd usually get there around 9:30am and leave around 5pm.

I was surprised by the diversity of my class! It was a wide range of people in every way: race, class, age, and career background. It was evenly split on gender, more so than I've seen in the actual workplace. My cohort was only 18 people – it was remarkable to see how different people were.

So what did you do after graduating, Pedro?

When I first left Wyncode, I was not on the traditional graduate path because within two weeks of graduating I had already started a healthcare startup with my friend. I also worked with Wyntalent, Wyncode’s consulting and job placement services arm, for about six months part-time while I worked for my own company.

Could you tell us more about Wyntalent? What does it do for students and what was your role there?

Essentially, Wyntalent is a firm that connects Wyncode graduates with hiring partners. At Wyntalent, first I was a Contract Software Engineer. I led development with another Engineer and UI/UX designer on a native mobile application. Working with Wyntalent was great. It gave me exposure to working with agile methodology.

Wyntalent also does lifetime job support for Wyncode grads. Wyntalent worked as a staffing agency or recruiter to represent me and find me my current role as Lead Software Engineer at RBI.

When you first attended Wyncode, did you expect that Wyncode/Wyntalent would be there to place you in your second and third roles?

When I began my job search after parting ways with my co-founder, I wasn’t exactly sure how Wyntalent would be able to help since I had been out of bootcamp for some time, but I knew between their network of hiring partners and their strong presence in the South Florida tech community they’d at the very least be able to point me in the right direction. They did so much more than that — Wyntalent helped me with grooming and improving my resume, connected me with potential employers for interviews, and helped me to negotiate the best deal once I decided where I wanted to work.

And what was the company you started?

A friend and I started to build out a product for healthcare practitioners. It was an ambitious idea and we worked hard toward it, but as a startup, we had issues and ended up pivoting a couple of times before we settled into a more traditional liaison role with laboratories. There were some regulatory changes at the end of 2018 and my co-founder and I decided to part ways and end our company. So I reached out to Wyntalent right away to start looking for a job. They essentially got me three interviews within a week. All three of those lead to job offers.

And you eventually accepted one of those offers at Restaurant Brands International –  Congrats! What’s your role at RBI?

At RBI, are you using the skills you learned at Wyncode?

At RBI, we primarily use React for our websites' front end and Node.js and AWS services for the back end. I didn't learn these specific languages at Wyncode (even though today, Wyncode teaches React), but Wyncode definitely set me up for this job. The second I finished Wyncode, I was able to hit the ground running, working on my own and with Wyntalent on iOS applications. What I truly learned at Wyncode was how to approach new problems and solve them effectively without knowing exactly what I had to do. It wasn't really important what technology we worked with at Wyncode. I haven't worked with Ruby on Rails since I left bootcamp, but I still think that the experience is invaluable.

Did you feel prepared for the technical interviews when you applied to RBI?

I had already spoken with RBI at length about what they were looking for and they mentioned technologies that I had a good grasp on. I was still nervous because it was a job interview, but I wasn't stressed about whether or not I'd have the ability to complete it. Even though RBI is large, the digital arm and software engineering team itself is still growing. The interview was a mixture of a traditional interview day where you speak with the different managers and there was a pair programming component.

Did RBI seem open to bootcamp graduates as much as Computer Science graduates?

There was definitely an apprehension at RBI about hiring someone with a less traditional background. They were very small and they didn't want to bring on anyone too junior because they didn't have the resources for mentoring or any sort of intensive training. They were willing to give me a chance after the interview process. Since then, everything has worked out. There has been no question about my qualifications.

For our readers who are graduating or have recently graduated, do you have any tips on job hunting post-bootcamp?

Work at it on your own time. One of the biggest things that helped me was not waiting for people to ask me to do things. Being proactive about my education and my job search and my work has been the most helpful thing in succeeding so far.

Did you feel like your undergraduate background was useful for your software engineering career path?

For sure. All of those interests taught me different things. Biomedical engineering gave me a lot of exposure to a different way of thinking about problems. Biomedical engineering is what reintroduced me to coding, I wouldn't have pivoted without that. Finance was also advantageous in a more abstract way by familiarizing me with business concepts that were helpful when I was starting my own company.

Do you have any advice for someone who is thinking about making a career change into tech through a coding bootcamp like Wyncode?

Weigh your options. Consider if this is something that you'd actually love to do. Don't do it for the salary. Money is not enough to drive you and motivate you long-term. Otherwise, it's a great career path and definitely one that will keep growing. There are a lot of different opportunities and there will be even more as technology improves.

Find out more and read Wyncode reviews on Course Report. This article was produced by the Course Report team in partnership with Wyncode.