Meet Kasia: From Dancer to Developer with CareerFoundry 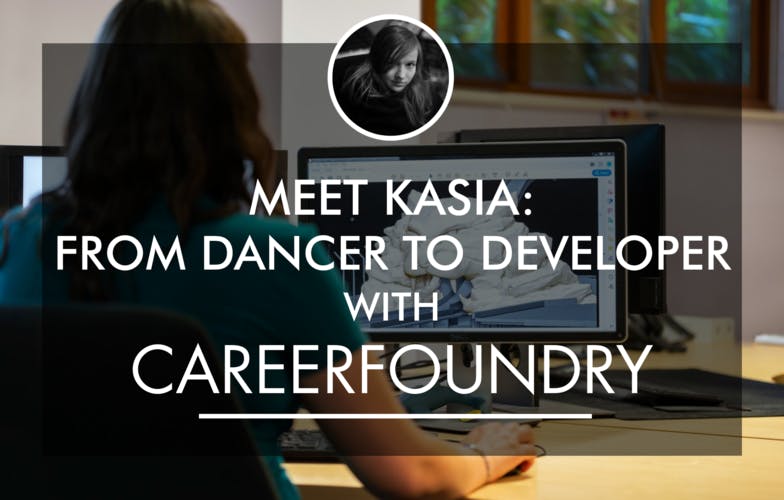 Kasia Pryczek didn’t even own a computer, but was on the hunt for a creative, flexible, stable career as she raised her newborn. She enrolled in CareerFoundry’s Full-Stack Web Development Program, and after graduation, moved back to her home country of Poland for a job at a software consulting company called Startup Development House. Find out how Kasia juggled motherhood and bootcamp, got promoted from Junior to Mid-level Web Developer, and fought through imposter syndrome in her career change.

What were you up to before CareerFoundry?

I was studying psychology in Warsaw, Poland, but after I finished school, I decided psychology wasn’t for me. I moved to Berlin and opened my own dance studio. After running that for about six years, I was forced to close the studio due to issues with my lease. On top of that, I had just had a baby! I felt like I didn’t have an education that qualified me for a stable income, and I didn't want to start another business. It was a breaking point for me to find a job that was less stressful and gave me more time to be with my family.

Why did you decide to enroll at CareerFoundry?

I found CareerFoundry’s online courses for web development. At that time, I was completely new to computer science of any kind, but I decided that if I could finish this course, this type of job would fit me perfectly. The fact that I could stay home with my baby while working or work from anywhere in the world is what made me give coding a try. I also found the team at CareerFoundry to be really helpful!

Being an online bootcamp, did you get to interact and learn with other CareerFoundry students?

We were often online together in the CareerFoundry Slack channel, but we weren't working together as much. We exchanged ideas, info about tasks, things like that. I always looked through the conversations to continue learning —  I even look at them now! People share their work, projects, ideas, and technical interview challenges. It's interesting and it's often helpful.

CareerFoundry pairs students with mentors – who was your mentor?

My mentor’s name is Robb Schecter. He's a total computer geek who's been in the industry for over 20 years! Since Robert lives in the U.S., we sometimes had a problem navigating the time difference, but we always managed to work it out. He was such a cool guy and super helpful. He would make time to give me advice, even after the course was over. I stayed in touch with my mentor more than other students, honestly. He still comments on some of my code, which I really appreciate.

What types of projects did you build at CareerFoundry?

The projects were my favorite part of CareerFoundry! You start the bootcamp with no industry experience, but you build actual projects that you can add to your portfolio when you graduate. We did three or four projects during the course. The first was a more static project that covered basic knowledge. We created a website to house our portfolio. Building that right out of the gates was cool! The second project was a basic e-commerce platform. It covered all of the principles. The other two were basic Ruby on Rails projects.

How did you juggle caring for a baby and doing the coding bootcamp simultaneously?

I actually look back fondly on that time. It was summer and I would take my daughter with me to the park for about two or three hours. She was about six months old at the time. We would walk around Berlin together. I would do my work on my little Netbook, which fit in my purse, wherever we ended up. Anytime she was sleeping, I would work on the course assignments. CareerFoundry’s online course structure was easy to follow and made all of that possible. They were constantly updating the course and the platform, too, to make sure the course material stayed relevant.

Did you feel prepared to get a web developer job when you finished CareerFoundry?

Upon completing the course, I felt confident that I had a good portfolio and I could articulate what I knew. Having the CareerFoundry certificate gave me more confidence, too. I moved back to Poland and began applying for jobs only to find that while Ruby on Rails, which I studied during the course, was popular in Germany, it was not popular back in Poland! It was mostly used by startups, and Poland was still dominated by corporations. Most companies in Poland were still using C++ and PHP. I didn’t panic because the nice thing about CareerFoundry is that you have access to the course materials forever, anytime anywhere. I decided to re-do my portfolio and all of my projects, which took about two months. After that, I began applying for jobs in Poland again. I got a job at the third company that I applied to, so it ended up not being a long search.

I’m working as a Ruby on Rails Developer at a software company called Startup House Development. We do consulting for startups and small businesses and help businesses find funding, proper technology, development, and solutions. About two years ago, I got promoted from Junior Developer to a Mid-Level Developer. I’m working towards becoming a Senior Developer.

How has your career as a web developer evolved over the past three years?

A lot has changed since I got hired three years ago. When I started working here, there were only five or six people in the whole company. Now there are over 60 employees! The growth of the company constantly changes what my work looks like. I originally worked in the office but now I work remotely. I was and I'm still the only female backend programmer, but there are some women that joined me this year for front end programming.

The programmers I've been working with are all people who formally studied computer science. In the beginning, I was scared that they wouldn't take me seriously, but they never actually treated me the way that I had feared they might. They never acted like I was someone who had less knowledge. I've already worked on so many projects: internal, external, domestic and international. I've tried everything! But I always stick to the back end. That’s my favorite.

Are you using all of the coding languages you learned at CareerFoundry in the real-world?

I started with Ruby on Rails. Of course, like every developer right now, I work with other languages as well. I am familiar with HTML, CSS, JavaScript, JQuery, Angular, and React. I also know Python, which is super similar in syntax to Ruby. I could potentially be a stand-alone developer and deliver an end-to-end application but I don't particularly want to do that. Mostly I use only Ruby on Rails and work on the back end. It's amazing because when I started the CareerFoundry course, I had no idea what I was looking at with any of these languages! Now I can look at any programming language and understand what’s going on.

What’s the biggest challenge that you faced in your tech career transition?

I didn't own a computer when I enrolled in CareerFoundry. My colleagues thought I was crazy! I bought myself a Windows Netbook — it's not even a laptop, just a small tablet with a keyboard. When I started the course, I struggled so badly with configuring anything to work on it, but I always found a solution.

Also, the programming world is seriously male-dominated. I was interviewed by a male developer or executive in every job interview. That's intimidating. It made me feel that maybe I was in the wrong place, but that's definitely not true. I've been with this same company for three years now working only with men until this year and I've been promoted! My progress has been pretty fast, too. Sometimes I even think, “Those guys had to study all their lives to be where they are right now, and I studied for one year and I’m only one step behind them!”

Do you have any advice for women who are considering working in tech?

Go for it! I had been sure that I would be treated less seriously than a man in my position. It wasn't a good attitude to have — I found that I was wrong! Don't listen to your inner voice when it tries to tell you that you can't do it. Tech is constantly changing, always giving you new challenges. As women, we should definitely give programming a try. Never underestimate yourself!