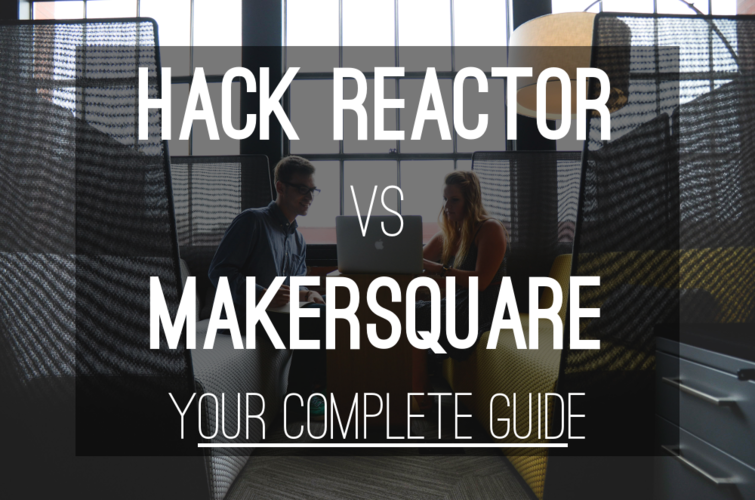 MakerSquare and Hack Reactor are two well-reputed, full-time coding bootcamps which teach full stack JavaScript. In January 2015, Hack Reactor acquired MakerSquare, and it became part of the Reactor Core network of schools. While MakerSquare continues to operate independently, the curriculum has changed slightly to better align with the other Reactor Core schools. Because of the overlap in curriculum and leadership, making a decision between MakerSquare vs. Hack Reactor can be daunting; our comparison will dive into the intricacies and subtle differences between the two coding bootcamps.

MakerSquare has been through an evolution over the last three years. The school was started by Harsh Patel, Shehzan Devani, and Shaan Shah in 2013 in Austin, Texas, as a Ruby on Rails and JavaScript coding bootcamp. In June 2014, MakerSquare opened a new campus in San Francisco, and in December 2014, the school shifted its curriculum to teach JavaScript. In January 2015, MakerSquare was acquired and joined Reactor Core – the network which now includes Hack Reactor, Hack Reactor Remote Beta, Telegraph Academy, and Mobile Makers Academy. In June 2015, MakerSquare opened their Los Angeles campus and is set to open a New York campus on May 31, 2016.

Hack Reactor was founded as a JavaScript coding bootcamp by Anthony Phillips, Shawn Drost, Marcus Phillips, and Douglas Calhoun in 2012, and since then has built a very established reputation. The co-founders wanted to “start the best school in the world for software engineers” and be “the CS degree of the 21st century.” From the start, Hack Reactor has been highly selective – in 2013 they were only accepting one student for every 30, and they are still selective today.

Other differences between the two coding bootcamps are that Hack Reactor offers a Remote Beta program, for students who want to complete the whole course online, and MakerSquare offers the Masters beta program, an advanced 8-week course for experienced developers. Co-founder Shawn Drost also pointed out that MakerSquare has a dev house in Austin, and Hack Reactor has an Alumni Lounge in San Francisco.

Both coding bootcamp programs are 12 weeks full time onsite. They have the same hours: 9am to 8pm, Monday to Saturday.

Both MakerSquare and Hack Reactor require pre-work before starting the in-person course.

Hack Reactor and MakerSquare employ the same curriculum, which focuses on full stack JavaScript, but MakerSquare makes small modifications to suit each of their locations. Technologies taught at both schools include JavaScript plus Node.js, jQuery, Angular.js, MongoDB, Express, and more.

MakerSquare students also have access to the school’s old Ruby on Rails curriculum while they are there, although this will not be taught.

Hack Reactor describes the curriculum as being designed to mimic a real job environment, with a focus on how to learn any new technologies that a task may require, and constantly evolves in response to feedback from employers and alumni.

Although the curricula are the same, the teaching approaches at MakerSquare and Hack Reactor are slightly different.

MakerSquare has smaller classes, with a maximum class size of 20 students, whereas Hack Reactor classes are between 30 and 35 students.

Culture at Hack Reactor vs. MakerSquare

Some students say the atmosphere is more “chill” at Makersquare. Makersquare graduate Ryan James said he chose Makersquare over Hack Reactor because it was more relaxed, with a chill vibe. Another MakerSquare graduate Jeff Louie said the environment at MakerSquare was both serious and relaxing, and that “during lunch time and at the end of the day, people would just hang out and talk or play ping pong and darts.”

Hack Reactor graduates regularly say the program is extremely intense. Graduate Austin Liu said the pace is really quick, and if you fall behind, you have to work even harder to catch up. Hack Reactor graduate Zach advised, “be prepared to work incredibly hard... The more effort you put in the better your results will be.”

Reactor Core Chief Research Officer Phillip Alexander told Course Report that Hack Reactor students are very driven, often staying up till 2am, hacking on intense and complex projects. Phillip says Hack Reactor is like an experimental testing ground for cutting edge education, so people who want to study in an unpolished, but innovative environment are suited to Hack Reactor.

Both Hack Reactor and MakerSquare are part of the Reactor Core Hiring Network, which has partnerships with over 300 companies including Microsoft, Intuit, Chase, and Slack.

MakerSquare claims to have a 96% job placement rate within three months of graduation, and average graduate salaries of $106,000 in San Francisco, $92,000 in Los Angeles, and $75,000 in Austin. MakerSquare hosts a Career Day at the end of every cohort, and provides ongoing graduate career support to help students get interviews with partner companies.

Realistically, each school likely has different reputations and hiring networks depending on the city. One MakerSquare graduate from San Francisco suggested in October 2015: “go to Hack Reactor over MakerSquare because even though they share the same curriculum, the job network is Hack Reactor’s and Hack Reactor has a much better reputation.” Another MakerSquare graduate disagreed, citing that “people ‘in the know’ realize the curriculum [at both schools] are the same and that attendance is really based off timing.”

MakerSquare CEO Harsh Patel says both schools have the same admissions standards and the same programming challenge and technical interview.

If you’re applying directly through the MakerSquare website, you will complete the admissions challenge, then prepare for and complete a technical interview on Callbacks in JavaScript, composing and writing functions, and how you respond to learning new concepts. Interviews can be in person at one of MakerSquare’s locations, or via Skype.

Applicants then schedule a Hack Reactor technical interview which is a live coding session with a Hack Reactor mentor, and students need to be familiar with JavaScript objects, arrays and functions.

Reviews of MakerSquare vs. Hack Reactor

In the end, we can give you the facts, but scouring reviews is the best way to get a feel for each school. Here are some highlights: