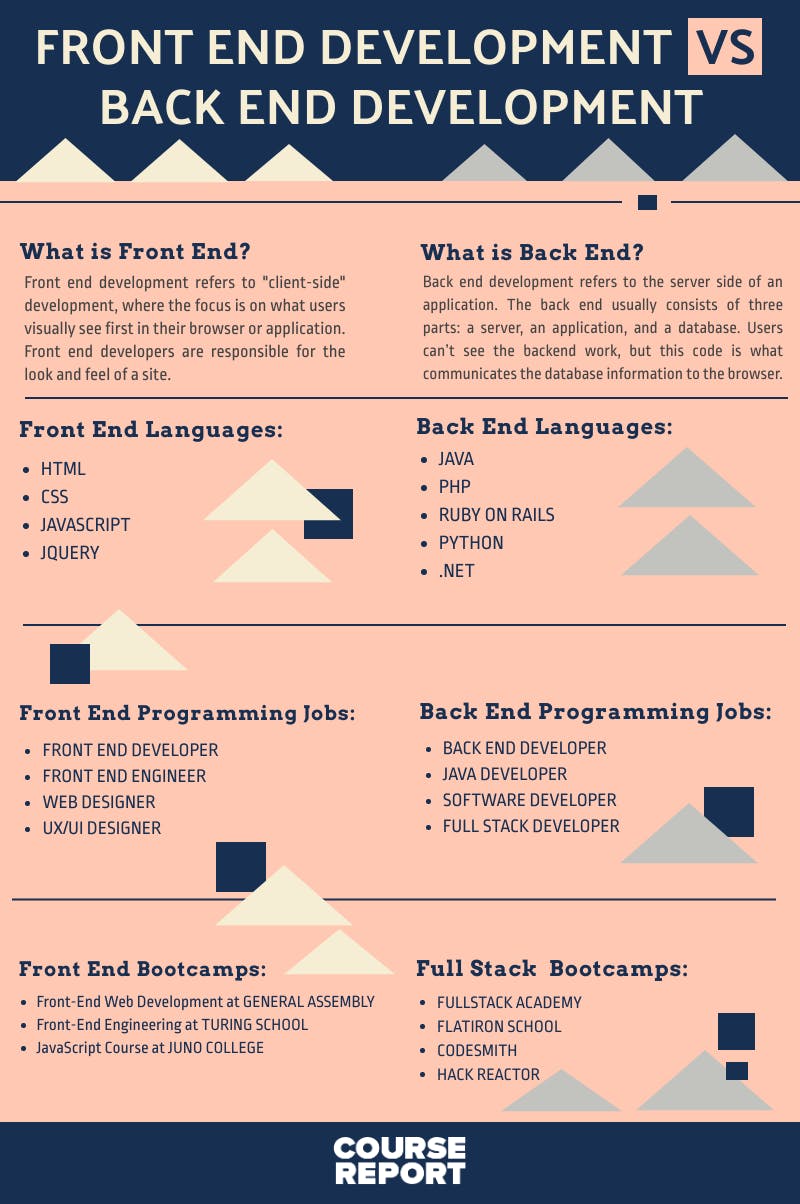 Do you want to be a front end developer or a back end developer? Understanding your career goals at the end of a coding bootcamp can make it easier to narrow down which school is best for you. This can be a tricky task if you aren’t familiar with these terms – but no need to worry now that you have this guide. Let’s dig into the difference between front end web development and back end development: which programming languages you’ll learn, which coding schools teach them, and what to expect from a career as a back end or front end web developer!

Get matched with bootcamps that teach front end and back end programming!

What is Front End Development?

Front end development is mostly focused on what some may coin the "client side" of development. Front end developers will be engaged in analyzing code, design, and debugging applications along with ensuring a seamless user experience. You manage what people first see in their browser. As a front end developer you are responsible for the look, feel and ultimately design of the site.

Front end languages include HTML, CSS, and Javascript. While JQuery is going out of style (modern browsers can now do the same work, but much more quickly than jQuery), many legacy projects still use JavaScript library, so don't be surprised to see it on a bootcamp's curriculum. You’ll also learn tons about responsive design along with typography, layouts, grid system, and color theory. When anticipating types of projects you’ll work on as a front end developer, think creating and redesigning websites. In order to be a front end developer (sometimes even called a Javascript developer) you do not need back end development skills. Sites created by front end developers won’t interact with information stored on a database in order to be functional. The content will be “fixed,” meaning that large pieces of new data will not be constantly uploaded. Small business owners and restaurants usually have great examples of static sites.

There are various job positions for front end developers. It’s important to remember that while one title may require specific duties at one company; it may mean something completely different at another, so it is always best to have a clear understanding of what that specific role entails. Search for the following job titles during your job hunt:

According to PayScale, the national average starting salary for front end developers is about $67k. The salary ranges from about $42k-$108k based on experience, location, and industry. In NYC, starting salary is about $78k with an approximate range to $115k.  Not too shabby.

What is Back End Development?

Back end Development refers to the server side of development where you are primarily focused on how the site works. Making updates and changes in addition to monitoring functionality of the site will be your primary responsibility. This type of web development usually consists of three parts: a server, an application, and a database. Code written by back end developers is what communicates the database information to the browser. Anything you can’t see easily with the eye such as databases and servers is the work of a back end developer.  Back end developer positions are often called programmers or web developers.

Many back end developers know front end languages such as HTML and CSS but need to use languages such as Java, PHP, Ruby on Rails, Python, and .Net to get the back end job done.  Back end developers are most focused on a site’s responsiveness and speed. These languages are used to create dynamic sites which are different from static sites in that these types of websites store database information. Content on the site is constantly changing and updating. Examples of dynamic sites include Facebook, Twitter, and Google Maps.

According to PayScale, the national average starting salary for back end developers is about $70k. The salary ranges from about $38k-$117k based on experience, location, and industry. According to SimplyHired, in NYC, starting salary is about $87k with an approximate range to $120k. Again, not too shabby.

Next Steps: Ever wondered about full stack development?

A full stack developer is a bit of a generalist. They are familiar with both front and back end development but may not have the same depth of knowledge as someone who specializes in either front end or back end. Check out these bootcamp offerings for full stack development.

And use our Bootcamp Matching Tool to find the best school for you!