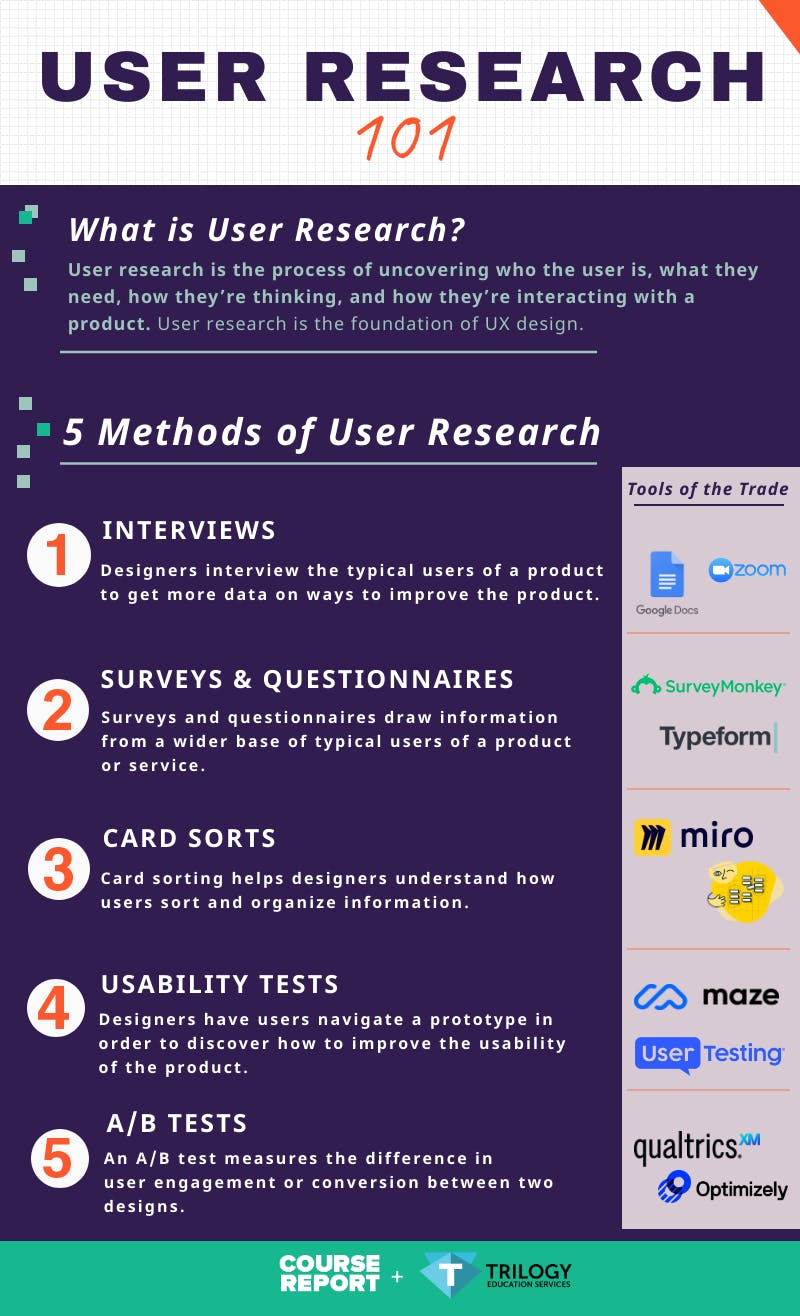 Design teams rely on user research to ensure that their products are addressing the exact needs of their users. Jordan Mesias of Trilogy Education Services, a 2U Inc. brand, walks us through user research fundamentals and its role in product design. Jordan breaks down the three major steps designers follow when conducting user research and the five most popular user research methods – interviews, surveys, card sorts, usability tests, and A/B tests. Plus, find out how you can learn UX research at a design bootcamp like the Trilogy/2U-Powered Boot Camps.

What is User Research?

Typically, designers are trying to isolate a problem, validate it, and find actionable insights. In design, you don’t design for yourself, you design for your users. But to design for the user, you have to get to know the user! Designers rely on user research to validate their designs in the hands of users.

When does user research come into a design project?

User research typically happens at the beginning of a project, during the exploratory phase. However, user research can happen at any stage of the design process; it can even happen after a product has been released!

User research is recommended for every design project, but factors like team scope, the scale of a project, and time constraints will determine if research is possible, but it’s always an important part of any project.

What kind of person makes a good user researcher?

Effective user researchers are an odd mix of personalities. Good user researchers should definitely understand the design process. It helps if you like sociology and understand how people think. It’s also important to have some data analysis skills and to be able to draw patterns from research.

Is there a specific “User Research” job title in the industry? What UX/UI roles are responsible for user research?

Job titles often vary in the tech industry, and user research is no exception. It’s certainly possible to land a specific role at a company as a User Researcher. It’s also possible for user research to be part of a UX Designer or UI Designer’s job description.

The 3 Steps of User Research

Designers interview the typical users of a product to get more data on ways to improve the product. If a company has a user base already, interviewees would come from that pool. An interviewee can also be a stakeholder tied to the product.

Designers generally rely on interviews in the exploratory phases of the design process. It’s a heavily qualitative method where you’re uncovering problems and understanding how users think.

There’s a myriad of interview tools a designer can use. Some specific tools are geared towards finding candidates and conducting interviews. Personally, I perform interviews remotely through Zoom and I have Google Docs for note-taking.

Similar to interviews, surveys draw information from typical users of a product or service. However, surveys allow researchers to reach a broader set of people since they take less time to complete on the researcher’s end. Researchers generally have a larger number of surveys compared to interviews.

There are tons of specialized survey tools out there, such as Typeform.

Card sorting is a method of getting to understand how users sort and organize information. Typically in a card sort, you give the user a given stack of cards or information and then ask them to sort it. This is useful for seeing how users process and group information themselves. For example, if you’re trying to understand user navigation on a recipe site, you can use a card sort to determine if the site should be organized by genre of cuisine, carb-based dishes, protein-based dishes, or any other combination.

Card sorting is useful when you have all the information you want to be available to users, but you don’t know the most effective way for them to process it. You put the information in front of the user and allow them to organize it for themselves.

Previously, designers would use tools like pen and paper or index cards for card sorting. Now you can use online whiteboard tools like Miro.

In an usability test, designers give users the prototype and ask them to navigate to a certain spot or give them a certain task to complete with the product. These are sometimes called think-aloud usability tests because I want the user to be able to say what they’re thinking out loud as they navigate the product. Designers can use these tests to understand how users intuitively expect products to function. They’re a quick, cheap, and easy way to improve usability.

Usability tests can be conducted throughout the design process. In our bootcamp, students are creating products like mobile apps from scratch. They could use these tests early in the process to examine new processes or they can test later on in the design to troubleshoot issues.

Similar to other methods, you need a product and a way to record your users. Some tools and services will source testers and conduct research. Maze and Usertesting.com are both options.

An A/B test is useful when you have a hypothesis that a certain element or feature is limiting engagement or providing a less usable experience. If you have a hunch, you can perform an A/B test against the product to determine if it’s the issue.

Optimizely and Qualtrics are both useful for A/B testing. In the UI/UX design boot camps offered by 2U, we utilize a scaled-down version called a five-second A/B user test. You present the user with two designs for five seconds and then get a quick impression of what the user thinks of both of them. It’s scrappy, but if you’re deciding between two features or variants, it’s a quick and easy way to do it.

How to Learn User Research

In the 2U-powered boot camps, we are providing students with the foundational skills of understanding the importance of user research and why you should conduct it. Part of this is advocating for the users themselves. We’re also giving students hands-on practice with user research. Students are able to showcase these skills by conducting different research methods and integrating them into the entire design process.

UI/UX design students at 2U-powered boot camps complete non-profit redesign projects where they contact non-profit organizations and ask where they think their website could be improved. After they’ve designed their prototypes and high-fidelity mock-ups, they perform usability tests. User research is definitely integrated into their projects.

I love UX design blogs because they are what supplemented my own learning. Nielsen Norman Group writes about a lot of great techniques for UX research. I also recommend designers check out UX Collective.

The Future of User Research

There’s a greater appreciation and value for UX research across the industry. The past year has seen growth in the ability and accessibility of remote user research. I would be excited to see user research grow and change to be more inclusive when recruiting research demographics. It’s important to consider that user bases don’t always default to one race, gender, sexuality, ability, or class. We need to take into account everyone’s unique perspective and insights.