Why I Upskill my Employees with The Software Guild 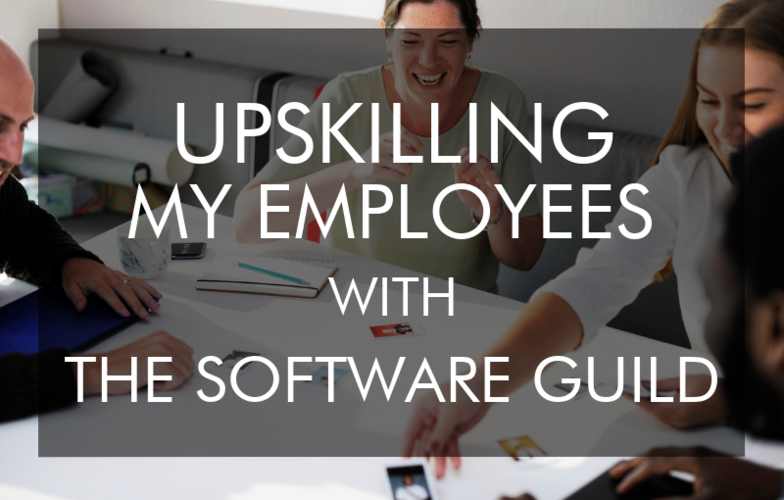 Think coding bootcamps only train newcomers to tech? Think again. This Minneapolis financial services company has employed the corporate training arm at Software Guild to update their current employees’ skills. We spoke with their IT Manager about why they wanted to retrain their team to build more consistent Java code and UI design. Plus, learn how he worked with Software Guild to build a custom curriculum that fit his needs and why the return on investment of employee training is a “no-brainer.”

What is your job and how are you involved with developers?

I’m an IT manager with a team of about 20 application engineers. We are decentralized from our main IT division and work directly in the business supporting our customers with the software they need to do their job.

We work in an agile environment which means people on my team get their work direction and priorities from their product owners rather than from me. My actual role is a people development leader – I hire, coach and develop the skills of my team.

How does your company work with Software Guild to train and hire your developers?

We work with Software Guild in two ways. First, we've interviewed their students and we've hired one. We've come close to making offers to other graduates, but you've got to be really fast with some of those grads because the students at the top of their class are in high demand!

How did you get connected with Software Guild?

When we interviewed our first Software Guild graduate who applied for one of our open position, we heard about the Software Guild program through that interview. Our offices are in Minneapolis and Software Guild has a campus in downtown, so we learned that there is an opportunity to hire their candidates.

Since then I've had a pretty close working relationship with their team. We are informed when they do speed interviews with upcoming graduates and have been involved in a number of those. Companies like ours are invited to come in and interview Software Guild graduates so we can get a jump start on hiring. It's been a good working relationship.

Did you have to convince your company to hire a programmer from a coding bootcamp?

There's always a bit of hesitation when considering a candidate who is making a change into their second career, but I think of them as I do any other candidate new to this profession. We take a look at their unique backgrounds and what they bring to the table.

One of our philosophies is to look for candidates who are a good match for our company and who also bring diverse elements to our teams. If we look to hire only straight-out-of-college-computer-science-graduates, then we may miss opportunities to find unique developers who bring new insights to our processes. To us, that’s very intriguing.

Why did you decide that your team needed training? What was missing?

I have 20 IT employees who are federated out of a division of 500-600 IT employees. So as a satellite IT group, we saw a need to create our own unique consistency in the way that we do Java programming and create user interfaces. We have three different development teams and people on our teams have different backgrounds and learning experiences. We started to see some inconsistencies between our teams and the way they wrote code in Java and built UIs. We’ve also seen some hesitation to use Java or HTML when they may have more familiarity with other technologies like Microsoft Access.

We wanted to get our entire team on the same page with their Java skills, and we knew one of the best ways would be to attend a class to learn the same curriculum. Our team members have been asking for this training for some time. The need and the opportunity have come together nicely with the Software Guild partnership.

Tell us how Software Guild is helping to train your current employees?

We have a strong partnership with the Software Guild, but we couldn’t send everybody in our division to their three-month bootcamp. Plus, we are not training beginner developers; they’re already engineering professionals in a software career. So we shrunk three months down into four classes. Each of these classes is four days long, and spaced out every two months. So an employee does all four classes in about six months.

My developers and I talked through what the curriculum might look like with Software Guild, and we designed this series of four courses. We've now completed all four courses.

How did you structure the four day classes? Which languages do you cover?

The second class taught basic Java and object-oriented programming – getting back down to the basics. For some of our team members who didn't know Java at all, that class was really helpful for them.

The third class teaches more advanced Java, and then the fourth class ties it all together. Employees actually build applications using both UI development and Java back end, and the course is about services and accessing data.

Once our employees tie those four classes together, they might think of themselves as full-stack developers.

Why do you think it’s important to invest in the future of your current employees?

We owe it to our business users. Every time we create code, we want it to be built for the long term. We want to build products that will last and can be supported for 10 years of more.

We approach employee training with the mindset that we’re investing in our employees in order to create long-term supportability with low technical debt – it’s a no-brainer.

Why did you partner with Software Guild instead of training your developers in-house?

The proof is in the pudding. I've seen the Software Guild candidates and their caliber of skills, and I knew that their curriculum is solid because of it.

We have employees that are willing to mentor, but don't have anyone skilled at putting together curriculum and training. Standing in front of 15 of your peers and instructing a lesson is a very specific skill, and it’s asking a lot from somebody. We're one department at our company, so if there was a need for this training across the whole company, we could scale it by hiring a trainer on a more regular basis.

Are your employees who have attended Software Guild classes getting noticeably better at their jobs?

After the first training class, one of our teams took the initiative to create a list of all the applications that could be upgraded with this new learned technology. Some of these applications have had a very long life, and employees wanted to upgrade them into the 21st century. The team had conversations with their product owner and now they've prioritized those updates, which is exactly the kind of behavior we were hoping for.

Did they rush out right away and start building web pages? No. That, of course, doesn't happen unless the demand is there. What I'm seeing is internal team conversations around our existing applications and what it would look like to make modifications or rewrite them. The level of maturity in those conversations is growing.

Is there anything that you would change going forward with this Software Guild partnership?

We hold a retrospective at the end of every class, and the feedback has primarily been positive. After the first class, we heard that we should incorporate more pair programming, so we applied that in the second class. That’s been a very positive impact on the learning atmosphere in the class, so we’ll continue incorporating pair programming. We’ve also learned that our team thinks the Software Guild Instructor, Corbin March, is incredibly knowledgeable and very easy to learn from, so we've been blessed by that.

We talk a lot about the right pace – is it going too fast for the people who are less experienced and too slow for the more experienced developers? Experienced programmers are relearning some material, but we still see that as a big benefit.

There are a lot of coding bootcamps now – how did you decide to work specifically with Software Guild?

Software Guild was looking for companies to train and we had just started looking for a partner to build a custom class. When we first sat down and started talking about what we were interested in, I was amazed at how willing they were to listen to our needs, and then customize a curriculum that would work for us.

I was appreciative that they didn’t say, "Here's what we offer. Take it or leave it." Instead they said, "Here's what we can teach. Now let's figure out how to optimize your employees’ learning." It felt like a partnership. Like I said before, the proof is in the pudding. You could have a company that partners and plans really well, but executes poorly. But that has not been our experience with Software Guild, and our employees in class have reinforced this – this bootcamp is teaching quality material.

What is your advice to other employers who are thinking about retraining their employees?

It really depends on the needs of your company. It’s never too late to invest in your own employees if you believe they can bring value to customers, particularly in the software space. Invest in and train employees in the areas that match the needs of your business partners – that's very important.

In terms of your employee morale, you definitely get a win from your employees when you invest in them and show them that their future matters. I've gotten feedback from our employees who publicly say, "I just want to thank our management team for investing in us and being willing to spend the money, a chunk of change, on helping us do what we do better for the sake of our customers."

We don’t make theoretical decisions. We've heard it directly from the participants.

3 Signs Your Team's Ready for Reskilling

And how a coding bootcamp can help

How to Hire a Coding Bootcamp Grad

Why Cloudability partners with Thinkful on a custom curriculum & guaranteed interviews

Insiten not only hires from DigitalCrafts, they also upskill current employees at the Atlanta school

Why Stack Overflow Hires from Bootcamps

Why JPMorgan Chase Hires From Bootcamps