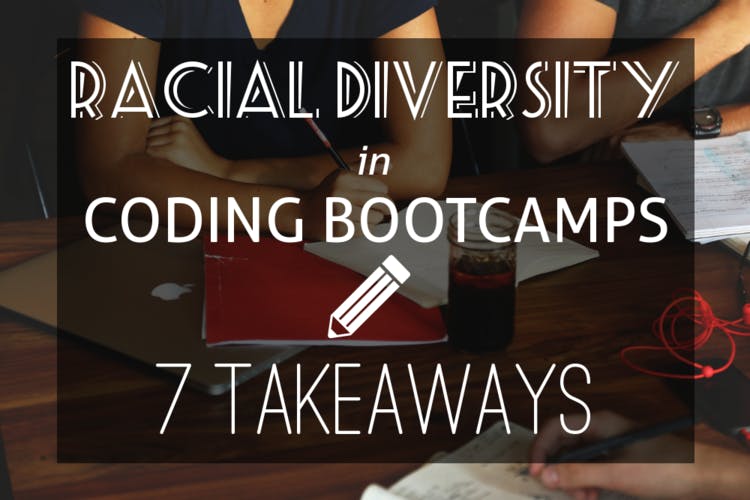 Because Course Report is part of this growing coding bootcamp industry, we are very interested in who is attending bootcamps and what that means for the larger tech industry. The growing interest in diversity in tech has led to an ongoing conversation that has even reached the White House.  Here are the facts:

With these facts in mind, Course Report sought out a team of bootcamp owners and instructors for the Racial Diversity in Coding Bootcamps Panel  to discuss what this means for the larger tech community. The panelists include:

Who is underrepresented in tech today? It’s not just about race…

Liliana from Sabio in Los Angeles explains  that the question of who is underrepresented depends on your market. “Although LA is predominantly Latino/a and African American, those groups along with women are grossly underrepresented in their tech workforce.”

Jorge of Turing School adds that diversity also means diverse backgrounds. “The fact that you studied literature or if you didn’t even go to college doesn’t mean you can’t be a programmer... programming is going to become a tool that will allow us to empower and impact our surroundings and our communities.”

Takeaway #1 The first step is asking who’s being left out of the tech workforce in the local area.

Jorge shares a story from a meetup:

Turing hosted a meetup with other developers and when we talked about diversity, the immediate reaction was, ‘We don’t want to lower our admissions standards or accept students who will diminish our academic [standards].’ My answer to that was, ‘Why are you assuming that there are no qualified applicants in those areas?’

If we haven’t looked in those communities, we haven’t found that untapped talent. It’s not that we’re lowering our requirements; we’re just looking at people we didn’t believe could do it before – and who are totally capable of doing it.

Takeaway #2 Qualified, diverse candidates exist, but you must look.

How do bootcamps successfully attract a diverse applicant pool?

Facilitating Representation. In a networking opportunity or educational experience, the first thing someone does is look at who else is there. Pattern matching is human nature. If an applicant looks at your program and says, ‘Hmm I don’t see that many women.’ Or, ‘This looks like it’s for kids, I’m too old for this.’ How can I find a place to call my tribe if there’s nobody there who shares the same physical appearance, background, or psychograph?

Communication. How do we talk to people? When you throw jargon around, telling students to learn high-tech skills, you’re excluding people who aren’t already in the know. If you can talk about the opportunity that a bootcamp offers or that ephemeral feeling that you get while in a bootcamp, then bootcamps appeal to more human narratives rather than to a certain subset of people.

Takeaway #3 Diversify your team and communication efforts to create an inviting culture for those who are underrepresented and come from non-tech backgrounds.

Liliana points out that “...in America, that wealth gap is about $100,000 between White/Caucasian Americans and Latinos/African-Americans. You cannot separate, unfortunately, race and wealth so it plays a huge role. Attending these bootcamps is certainly difficult.”

Here are just a few things diverse schools have done to remove the financial barrier:

Students that differ from the dominant demographic may feel out of place due to gender, race, age and other factors. Jorge noted that at Turing School women bootcampers estimate their performance as worse than it actually is, while men tend to exaggerate their performance.

Shaun adds You’re talking about this very technical thing that I’ve never experienced and everyone’s nodding. ‘Might be because I’m black; we never did stuff like that.’ Or if everyone’s like, ‘Yeah, this one’s really easy’ and you’re like, ‘Oh Jeez…I’m just one generation too far from this. Maybe I’m just askew from what this experience is and what the outcomes can be.’ And it’s all B.S.

Turing bootcamp student Jai adds that people who don’t share similar experiences, may not feel that their experience is valuable or useful to the group,

Maybe if you don’t feel like you have a lot in common or you feel like the messages and stories you have to tell don’t resonate with the group, you may never step into the leadership role and you may experience the imposter syndrome, “I know I’m not the best. I know these people are just crushing it every single day and I don’t feel like whatever I have to add is really valued by people.

Takeaway #5 Be aware of minorities of all types (age, gender, personal background). Value their experience and what they bring to the table.

Schools with a diverse student population rely on alumni for referrals and mentoring new cohorts.

Shaun says “There’s a very large amount of our student base that comes from referrals and it happens pretty organically.”

At Telegraph, we certainly set the expectation with anyone who’s applying or taking the prep course that we’re out to build a real community of software engineers of color in Silicon Valley and Beyond and we expect that they’ll come back and contribute. - Mo

Jorge adds, “We have a good alumni network and also, they formed this group called Women at Turing where the female alumni support female students to go through our program and deal with some of the things happening in the tech scene and that they’re seen as acceptable.”

Takeaway #6 Maintain relationships with diverse bootcamp graduates and leverage that relationship to build a community of support for future students.

Diversity is a business imperative

Jai reminds us that diversity extends well beyond our nation’s borders. I think it’s because people are thinking of diversity from the U.S. context, but they’re not thinking that everybody around the world also has computers and is developing and the tech industries in those countries look radically different than the tech industries in the U.S. So you need people who can interface with those other sectors and other places in order to grow.

Liliana adds, I would say that it’s actually a business imperative that these teams be diverse. Facebook came out and reported that of their 1.5 billion users, roughly less than 25% of those users are in the United States. They are a global company and if they want to get to 2 billion users they have to diversify their workforce; it’s an absolute business imperative. Because you can’t be creating products for the entire globe with 20-year old males. That’s just not going to work.

Takeaway #7  Companies with a global reach need a diverse team to build products for international markets.