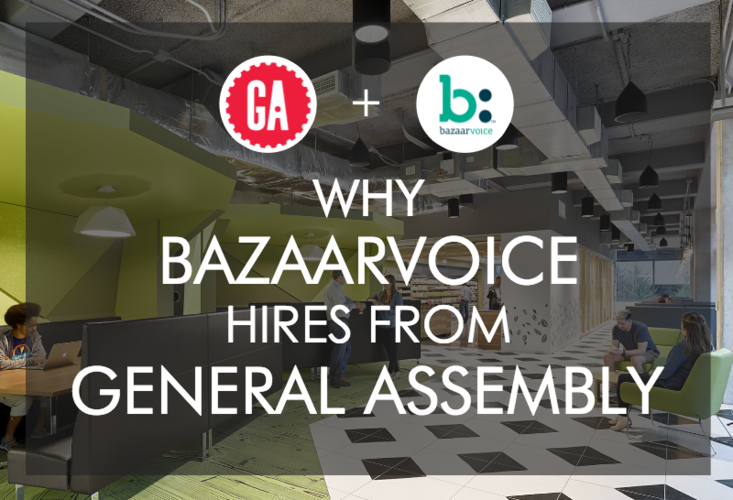 In the past year, SaaS company Bazaarvoice has hired more than 10 General Assembly graduates into Implementation Engineer and Technical Success roles (which require JavaScript chops and soft-skills to onboard new customers). We sat down with Bazaarvoice Talent Acquisition Manager, Travis Baker, to hear his advice for employers hiring coding bootcampers and how “General Assembly grads start contributing significantly faster than candidates hired through traditional channels.” See how General Assembly courses like the in-person and Remote Web Development Immersive are leading students to success.

Tell us about Bazaarvoice and your role there.

Bazaarvoice provides solutions that offer brands, retailers, and consumers a direct link to each other through consumer-generated content such as ratings and reviews, visual content and social posts. Because of the strength of our network, we’re able to provide our clients with data and insights that help drive sales conversions and ultimately revenue. I like to think we’re helping our clients bring the fight to Amazon. Working in Talent Acquisition, I focus on creating connections between the broader candidate market and our internal hiring managers and leaders. Basically, I do the same thing as our technology, but at a much smaller scale.

How did you get connected with General Assembly as an employer?

It started with my previous employer, Kinnser Software. At the time, Katy Stover from General Assembly was doing a lot of community outreach in Austin and spreading the good word on the General Assembly concept. I’m pretty passionate about modernizing education, particularly as it relates to workforce readiness. I was excited from the beginning, but there wasn’t an obvious application at Kinnser. After moving to Bazaarvoice, we were working on hiring a large number of Implementation Engineers. This team helps get clients up and running on our products post-sales. They interact closely with the client’s technical teams to make sure all the technologies mesh. Traditionally, it was a really difficult role to fill for the company. We need folks who have coding ability, but don’t necessarily want to code day-in, day-out, and also have a strong customer-service mindset. Students coming out of the General Assembly programs are a natural fit.

Not only have we hired Implementation Engineers, but we’ve also hired several graduates in our Technical Success team. In total, we’ve hired 10+ General Assembly grads.

Other than General Assembly, how do you usually hire developers? What are you looking for in a new hire?

We, like many software companies, still over-index on experience and traditional computer science education, but ultimately, I think the market will drive certain behaviors. General Assembly is supplying the market with a deep pool of really strong people from the in-person and Remote Web Development Immersive and I think adoption will happen naturally. Currently, we don’t hire developers from General Assembly, but I would love to in the future. Better yet, I’d love to build a program around bringing in and growing recent grads. We have yet to cross that chasm, but I think the market will evolve.

Have you worked with any other coding bootcamps yet? What stands out about General Assembly bootcamp grads?

I have – Austin Coding Academy, The Iron Yard, and Hack Reactor. These are all respectable organizations that produce a terrific product and provide a real service to the market. I’ve met several students and graduates of these programs and I’ve been truly impressed.

What separates General Assembly and their students is the community aspect: the constant outreach, the iterative approach to their business model, the events – it all adds up to a multi-dimensional experience for the students and their partners. From my perspective, General Assembly feels like a mission-driven organization and it’s easy to be swept up in the enthusiasm the General Assembly team and students exude.

What does the relationship look like between Bazaarvoice and General Assembly?

At this point, we’ve been working with General Assembly so closely that their Outcomes Career Coach, Nicole Umphress, and the team just know what we need. She does a great job of presenting the opportunities we have available at Bazaarvoice and connecting us with the students who show interest.

Going back to my previous point about General Assembly being mission-driven – there’s no fee to hire someone from General Assembly because they’re driven by the success of their students. I think they understand the value they bring to the market; accelerating the careers of their students by providing the skills they need to get the jobs they want. In my opinion, charging a fee for companies to hire your graduates is an exploitive and predatory practice.

Did your hires from General Assembly go through a technical interview? How did they do?

Our process for hiring Implementation Engineers and Technical Success Managers is pretty straightforward. A recruiter will have a quick 20-30 minute call with the candidate. It’s an opportunity to answer questions and share more information about the role and Bazaarvoice in general. It’s also a chance for the recruiter and candidate to connect and get to know each other better.

The next step is a self-paced online assessment; it takes about 90-minutes. The assessment is designed to not only test technical aptitude, but also communication ability. The questions mirror fairly common scenarios that someone in this role would encounter. In particular, we’re looking for candidates to explain complex technical information in a colloquial manner; something a non-technical person could review and fully digest. This is an area where General Assembly students tend to excel. The rest of the process is fairly standard: a phone call with the hiring manager and an onsite interview, leading to a decision.

Did you have to convince your company to hire a bootcamper?

In short, no. Given that these roles marry technical and non-technical skills, the complexity of finding candidates with this rare mix, and the eagerness that General Assembly and their students have to partner with us, it was an easy sell. To be fair, I think there’s a huge area of opportunity to hire bootcampers directly into development roles.

At General Assembly, students learn Rails and JavaScript. Are your coding bootcamp hires working in that language or have they had to learn new languages or technologies?

Our bootcamp hires technically aren’t working in any specific language. They are, however, leveraging their JavaScript knowledge to interface with both the technology of Bazaarvoice and the client.

One of the biggest concerns we hear from bootcamp alumni is how they’ll be supported in continuing to learn in their first jobs. How do you ensure that the new hires are supported in that way?

We’re still a fairly small company – around 800 people globally. We don’t have a formalized learning and development function, but there are plenty of opportunities to grow. Most of the General Assembly grads work in our Client Services function. It’s our largest organization and the opportunities are boundless. When working in software, there are two things that never hurt: knowledge of the product and an understanding of the technology. Our General Assembly grads are hired right into the apex of these two skills. As our Services organization continues to grow and evolve to react to what the market demands, new and unique roles are created constantly. The Implementation and Technical Success groups are often tapped for these new roles, providing new and unique opportunities for these folks.

Since you started hiring from General Assembly, have your new hires moved up or been promoted?

Our longest tenured General Assembly hire has been here roughly 10-months. So, no one has been promoted or moved around yet. However, initial feedback from the team has been really positive. General Assembly grads ramp quickly and start contributing significantly faster than we’ve experienced with candidates we’ve hired through traditional channels.

Do you have a feedback loop with General Assembly at all? Are you able to influence their curriculum if you notice your dev hires are underqualified in a certain area?

We have a monthly call with Nicole to discuss students and the GA curriculum. My partnership with General Assembly has expanded both personally and professionally, which has allowed me to share feedback in almost real time. All indications point to General Assembly listening, taking the feedback, and iterating on the curriculum.

Will you hire from General Assembly in the future? Why or why not?

Absolutely. They solve a unique business need for us and we rely heavily on this partnership.

What is your advice to other employers who are thinking about hiring from a coding bootcamp or General Assembly in particular?

Index for skill. Train interviewers, managers, and leaders to interview well – make them experts. Define what a successful hire looks like and measure results. Recognize the unique set of skills these people offer.

Sure, they’re going through a coding bootcamp, but is there another application within your business that makes sense? General Assembly students are looking to build a career and are open and receptive to cool opportunities. Yes, many only want to be developers, period. Others see that software is a great place to be in general and are looking for an opportunity to pivot. Be open to all of them, because they’re smart, hard-working, passionate, and motivated. It’s easy to build from there.