Women make up only 24% of the tech workforce, and this number could shrink to 22% over the next 10 years. The US isn’t just lacking women in tech, there’s a general shortage of tech talent: universities only graduate about 52% of the technology workforce needed to satisfy a growing job market. Without alternative education funnels like coding bootcamps, which are particularly conducive to women, (the result of lower cost and flexibility) we won’t meet those requirements. To measure these impacts, Course Report surveys real coding bootcamp graduates to understand who is graduating from coding bootcamps and how successful they are. In our first post of this series, we explore the illuminating data we found about gender in coding bootcamps.

According to The Taulbee study, only 21% of undergraduate computer science degrees were awarded to women in 2019 – but the blockage in that pipeline doesn’t start in college. In high schools, 27% of AP CS exams were taken by women; and before that, girls drop out of STEM subjects in their teens, discouraged by a lack of role models and a plethora of gender stereotypes.

Yet the enrollment of women in coding bootcamps has gradually increased since the first coding bootcamps launched in 2011. In the Course Report survey, we found that 41% of bootcampers who graduated in 2020 were women. Over time, that representation has only grown (women accounted for 32% of graduates before 2015). 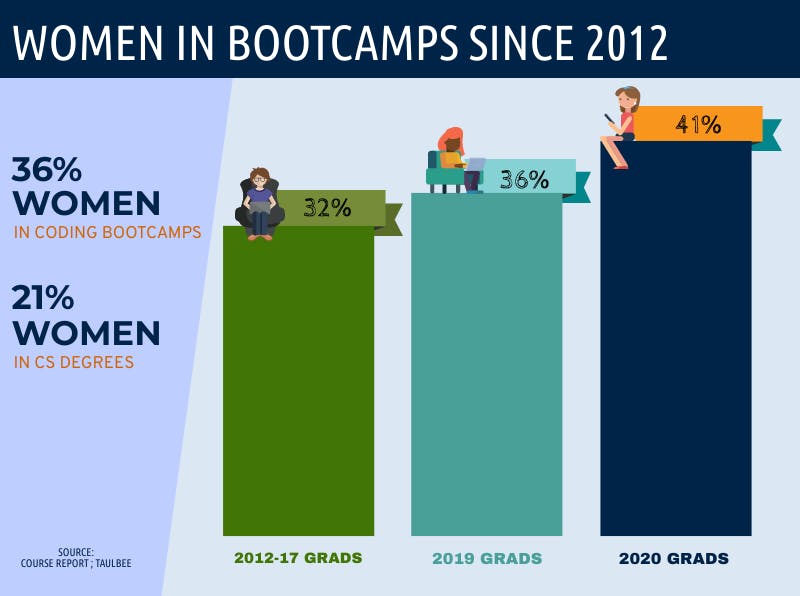 Historically, there has not always been an imbalance of gender in tech. Meg Duffy, Program Manager at The Grace Hopper Program says that, originally, women actually led the technology sector. “During and after WWII, women were the primary workforce, operating and managing computers and programming devices,” she says. “It wasn’t until the 60s, when computing systems became more powerful, and men were hired in as managers and began relegating women into secretarial roles, that the gender dynamic began to shift.”

Sarah Ervin, Ada Developers Academy Student Counselor and Diversity Trainer, sees that the advent of the personal computer amplified that shift. “Boys and young men were more likely to be directed towards computer technology and we developed the masculine ethos around tech that we’re still grappling with today,” she says.

Since the tech boom in the 1980’s, Ervin says women entering tech increasingly found that work cultures celebrated “a very specific tech ideal – young, white, and male.” She points to two methods of exclusion: “One, women have been less likely to be technically trained or have access to tech careers, to begin with, and two, the culture of tech itself has often been exclusionary and toxic for the women who do make it in the door.”

Online coding bootcamps like Thinkful and Bloc bring geographic freedom and accessibility to the bootcamp model. Unlike traditional MOOCs, however, online coding bootcamps offer face-to-face instruction, guided mentorship, and an outcomes-based curriculum. In online bootcamps, women (49.5% of online graduates) and men (49% of online graduates) are almost equally represented. For women specifically, flexible learning models enable more access for mothers and caregivers to be able to learn at their own pace or without leaving their homes.

For example, Flatiron School currently sees 50/50 gender parity in their online program. The bootcamp attributes this success to their Women Take Tech Scholarship which quickly reshaped their online community from 35% women to 50% women. 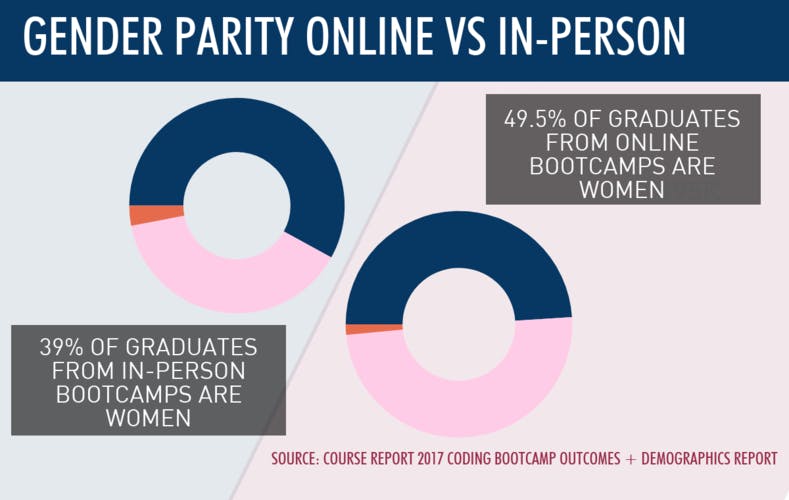 And on top of the pay gap between men and women, “there's a confidence gap,” says Flatiron School’s COO, Kristi Riordan. “We look for ways to break down imposter syndrome for women in our community, before, during, and after our programs – from trusted routines in which students can speak openly about their experiences to panels and events that inspire and spark conversation about these issues.” For Flatiron School, every interaction with their team plays a role in showing women that this kind of education and career isn’t out of reach.

Not only do we see a current education skills gap for women in tech, but there’s also a real challenge with salary and compensation for the women who have broken into the industry. While women see salary disparities at every step of the journey, Comparably’s latest study shows that women new to the tech workforce (18-25 years old) make 29% less than men in the same age group.

According to the latest bootcamp research, gender has very little impact on post-graduation salaries and employment. In fact, while men report slightly higher salaries, women are more likely to be employed in tech after graduating.

We know that this debate is not merely ethical, it is also economical. The importance of diversity of thought and life experiences speaks volumes to the bottom line of a business, and to the overall success of the economy. Morgan Stanley reported that a more diverse workplace delivers better returns and less volatility. Mckinsey reported that companies in the top quartile for gender diversity are 15% more likely to outperform against industry medians.

“It’s pure math. It’s very difficult to see how we can meet the technology workforce needs if we’re literally leaving more than half of the available talent pool sitting on the bench.” -- Judith Spitz, a former Verizon CIO

Coding bootcamps are demonstrating that this learning model is a beneficial alternative for women looking to make their mark in the tech industry. Flexible learning structures with shorter class lengths, and online courses allow for greater work-life balance. And overall, bootcamps have lower barriers to entry with flexible payment models, lower tuition costs, and deferred payment and income sharing options. “In addition to cultivating that supportive environment, we also operate on a tuition-deferred model, so our students don’t pay tuition until after they get jobs as developers,” explains Meg Duffy of all-women bootcamp The Grace Hopper Program. “This reduces risk for women and activates our commitment to diversity. We don’t get paid unless our students get the top-quality education and guidance that enable them to be successful in this field.”

With the creation of all-women learning environments, students can learn in a safe place and graduate as a confident tech professional. All women spaces are more supportive and conducive to taking on challenges that male peers may not relate to. Tori Tsu, Marketing Manager at all women school Hackbright Academy says, “being the only woman in a classroom of men can worsen the effect of Imposter Syndrome, a condition to which many software engineers, regardless of gender, are especially vulnerable. While students will likely join teams of mostly men after graduation, Hackbright peers are available as a supportive network of women on similarly male-dominated teams.” Hackbright prides itself on a robust mentorship program, as well as a powerful alumnae network to help support students while in the program, and after graduation.

Bootcamps recognize the inherent problem of the current state of the tech industry, and with part-time options, flexible scheduling, mentorship, and scholarships initiatives, they continue to help provide a solution. Achieving gender parity in the technology industry will not be an easy task, but by diversifying the education paths that feed the pipeline, we’ll start to see improvement.

Check out some personal accounts of women in tech + coding bootcamps