Brynne's Career: From Fashion to UX Design with BrainStation 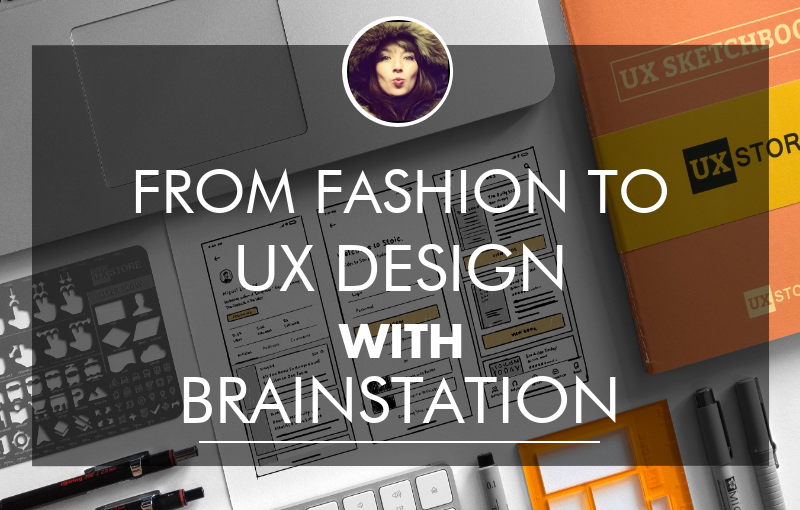 Brynne’s background in the arts and visual design led her to the fashion industry, but she was ready to shift careers towards a more sustainable future. She decided to merge her creative background with her interest in psychology and pursue a career in UX design. Brynne enrolled in BrainStation’s three-month UX Design course in Toronto where she was able to apply her fashion background to her capstone project, attracting the attention of global advertising agency Tribal DDB. Brynne chatted with us about her bootcamp experience, making a career change, and her (very busy) first month at Tribal!

What were you up to before you went to BrainStation UX Design?

I got a Bachelor of Fine Arts from Ontario College of Art and Design (OCAD) in Canada focusing on photography and sculpture. From there I went into visual display and I spent eight years designing for store windows, working my way up to a Visual Director. Eventually, the job started wearing on me so I wanted to leverage my graphic design abilities and love for creative work with my interest in psychology and human behavior. I decided to move into tech and doing a UX bootcamp was a great way to marry my two passions.

Why did you decide to take a UX bootcamp to make that career transition? What stood out about Brainstation?

I looked online at some Udemy courses but I chose a bootcamp because I knew that being with other students and teachers would be good for my learning style. I also knew I could get an education really quickly at a bootcamp. I chose the BrainStation full-time design program so I could jump in with both feet and get experience working with both UX and UI. I looked at other bootcamps in Toronto like HackerYou and RED Academy, but I liked how BrainStation had some great success stories and a number of connections with employers.

I went to an alumni panel discussion and met with the BrainStation team who were all really receptive and supportive. I exchanged some emails with the school, had a remote video interview, and they sent me precourse work – I had to teach myself some UX concepts and do some mini assignments. The main assignment was to order something on a food delivery app and suggest app improvements, build a customer journey, and do a redesign. I’m a perfectionist so I felt some pressure, but it wasn’t that difficult and I really enjoyed it once I started working on it. It gave me a taste of a UX career and what to expect in the bootcamp. Once I did the assignments I felt good about starting the course.

Who were the other students in your bootcamp?

The backgrounds of the other students were really diverse! The class was evenly divided between male and female. We had various types of Designers, some people who studied psychology, one person was a pharmacist, and another person came from the airline industry.

Do you think it’s important to have design/visual art experience when entering the UX field or can people come from any background?

It’s going to be beneficial to have a design background but I don’t think it’s necessary. There are jobs in UX that are very research-heavy and strategy-heavy. Other jobs will require UI design skills. My classmate who was a pharmacist before BrainStation had great grids and great presentations! And because of her background, she might be able to get a UX job in the health or pharmaceutical industry.

It was super intense: a full-time, three-month program. I really had to put my life aside and invest myself into the program. The first two weeks of BrainStation were remote and we did a sprint in a group of 3-4 people and presented our app prototype. When we went into the classroom for the in-person portion, there were a mix of teaching styles. We had morning lectures and afternoon hands-on lab exercises. We would also go on tech tours to startups and  larger companies to get a real taste of what it looks like to work as a UX Designer. Guest speakers from companies like IBM came in to speak as well.

The day-to-day at Brainstation was very hands-on – there were two main teachers and two TAs with about twenty people in the class. Assignments were due almost every week and each of those ultimately related to our final capstone project. The smaller assignments felt more bite-sized, but those built up into a comprehensive project I could also use in my portfolio.

What did you choose to build for your capstone project at BrainStation?

As a Storefront Window Designer, I spent a lot of time in a fashion retail environment and had to dress a lot of mannequins. For my capstone, I focused my problem space on fitting rooms – no one really likes trying on clothes and it can be really frustrating to find the right fit. I designed an app with an augmented reality fitting room. Users upload a 360 degree image of themselves, the app  measures your body, and then you can virtually “try on” the clothing in your shopping bag. The app would show how the clothing fits your body with sizes and colors, so you can get a realistic visual of how clothing would look. 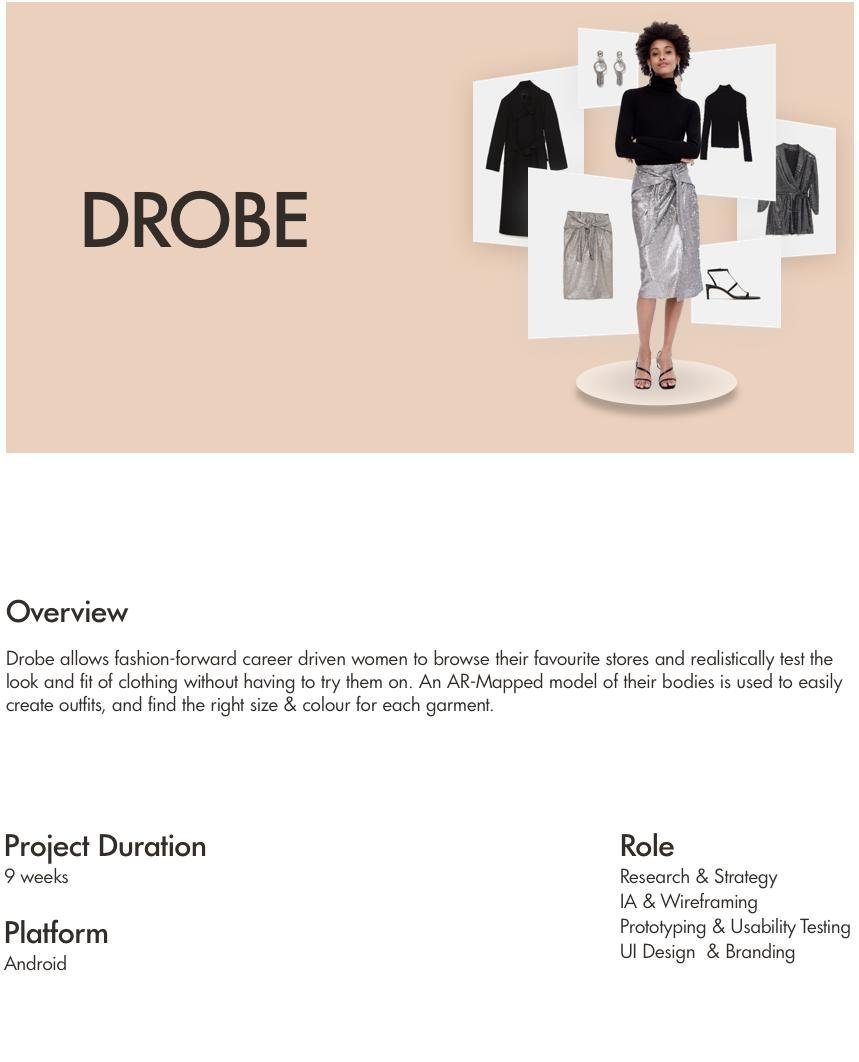 Because this was a UX/UI design project, I built a case study and prototype. That means I I did some preliminary research and interviews with people about their shopping habits, asking what they liked, didn’t like, and what their frustrations were so I could realistically build an app that could meet their needs. Based on the interviews, I designed the task flow, drew some rough sketches built wireframes, and used InVision to upload my screens to conduct user testing. I asked participants to test the app and then made iterations to refine it to what it is today.

I then did a final presentation in front of the class and on Demo Day each student set up a booth to show prospective employers our prototypes and process work. That’s how I met my current employer, Tribal DDB, actually!

That’s so cool! How did the job interview process go with Tribal?

We had a nice chat at Demo Day after my demonstration because they liked my app design. The following day, they contacted me for an interview – I went in the following week, and walked out with a three-month contract. I was surprised it all happened so fast, but I think if you have a strong idea for an app and you’re enthusiastic talking about it, then other people get excited too. Even though I’m currently a contractor with Tribal, I’m happy to be working so quickly and I can count on BrainStation for networking events, alumni connections, and more opportunities to connect with people. I feel like that’s the best way people get jobs in tech – through building and connecting with your network.

Congrats! What does Tribal do and what is your role there?

Tribal DDB is a global advertising consultancy with a location in downtown Toronto. My position is Junior Product Designer and I’ve already done a few projects in the first month of working here. I took notes for user testing on a tourism website, I conducted stakeholder interviews for a discovery project for a website, and built out two responsive landing pages for mobile and desktop. I’ve already gotten a lot of experience under my belt.

Do you think there are similarities between your past career in visual design and your new career as a Product Designer?

I used to work client side with people at agencies and now I’m at the agency. There are are a lot of similarities but the work itself is very different because it’s in a digital space. Before, I was creating physical spaces – what everyone would see when they would walk into a store - and now I create what people see when they come to a website. It’s definitely different in a lot of ways, but it's also similar.

Are you using the skills you learned at BrainStation in your everyday work?

I’m using Sketch and Invision, which I learned to use at BrainStation. They taught us how to build responsive landing pages, and the UI we learned has been a huge part of my day to day. I  conducted basic usability tests at BrainStation for my assignments, which also have been very relevant to my new job.

Tell us what a Product Designer does – is it different from a UX or UI Designer?

The “product” in this case is a digital product. I consider a Product Designer a marriage between UX and UI, but I also consider UI to be under the umbrella of UX. A UI Designer is similar to a graphic designer because it’s mostly visual and is focused on the interface design. UX design is the user’s experience itself. Roles and responsibilities can vary from company to company, but in this role, a Product Designer is doing both UX and UI.

What’s been your biggest challenge in your journey shifting to UX/UI design?

It’s actually been a pretty successful change. I went to BrainStation and busted my butt to try to make the best product that I could make. I was really excited but I was also a little insecure. However, once I started talking to people on Demo Day and they were excited about what I was doing, it was really encouraging. When I started my new job, I had a bit of imposter syndrome, which is common for a lot of people who shift careers but now I feel like I've got a good understanding of how things work at an agency.

Is there a salary difference between your last role as a Visual Director and your new Junior Product Designer job?

My salary as a Visual Director was definitely higher than my salary as a Junior Product Designer, but moving into tech is a much more sustainable choice. I was in a director role and now I’m in a junior role – I definitely took a pay cut, but there are so many growth opportunities in this space. As a UX Designer, I’ll eventually be earning more than I was as a Director in my former job. There are so many different avenues and versatility – you can go into information architecture or UX research or strategy and specializing in an area will get you more money down the line. It was a no-brainer for me.

What advice do you have for people who are about to make a career change through a bootcamp?

Be prepared to do everything you can to stand out and make connections. Know that you probably won’t be able to have a life when you’re in the course, you have to put 100% into it. Just jump in and do it!

Interested in making a career change into UX/UI? Check out BrainStation’s UX Design bootcamp or read reviews on Course Report. And connect with Brynne on LinkedIn!