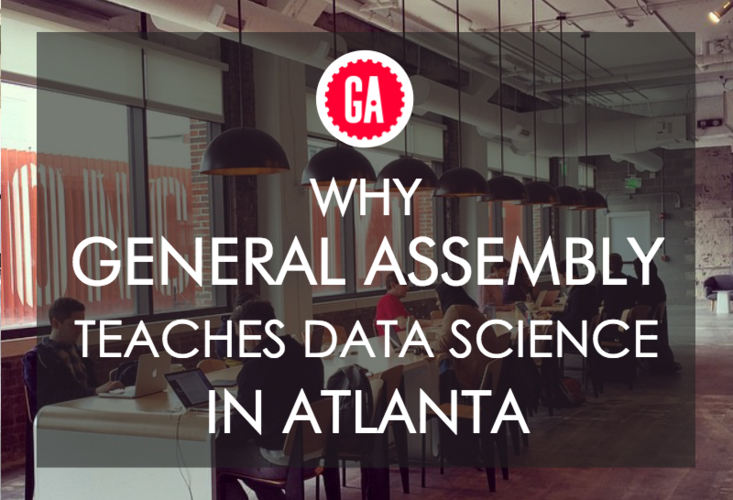 Atlanta is home to tech startups like MailChimp and Cardlytics, in addition to powerhouses like Home Depot, and Delta Airlines. Alternative education providers like General Assembly are fueling the hiring needs of these Atlanta companies, and we’re diving into GA’s Data Science Immersive with instructor Justin Pounders. Justin tells us about the extensive background he brings to the General Assembly teaching team, why data science skills are in-demand in Atlanta, and why he’s excited about the growing relationship between GA and the local community.

What’s your background and what led you to join General Assembly as a data science instructor?

I’ve always been fascinated by the intersection of mathematics, computers, and problem solving. I have a Ph.D. in Computational Nuclear Engineering from Georgia Tech, and I’ve worked in both the industry, as well as academia as a research professor. I’ve found that I really enjoy teaching. I saw data science as an emerging field where I felt I could have the most impact and pursue my passion of solving interesting and challenging problems using mathematics and computers.

I first heard about General Assembly through a “Talk Data To Me” evening workshop in Boston, where I was living at the time. It seemed like a cool organization, not only because of their classes, but also because they were engaged in the local community, and hosting workshops and events that brought people together around exciting tech topics. About a year later, I was contacted about the Instructor position here in Atlanta and it seemed like a great opportunity. I’ve been here for three months.

What immersive courses or tracks are available at the Atlanta campus? How long has the campus and the data science bootcamp been running?

Can you tell us more about the demand for data science skills in Atlanta?

There are a lot of big companies in Atlanta, and these companies are starting to realize that there is a lot of value behind data science. The insights and knowledge that companies can derive from data science and analytical techniques that we teach at General Assembly are becoming more in-demand. And I think that demand for data science and the skills we teach is just going to continue to grow.

How did you decide which technologies to teach in the Data Science Immersive?

We start off in SQL, which is the most fundamental language you need to know in order to extract data from databases. We then teach Python and tools in the Python ecosystem – ie. Pandas, NumPy, scikit-learn, and TensorFlow. All of those technologies are interwoven with the foundational mathematics and the theoretical knowledge that goes into data science.

I think it’s a great decision to teach Python because Python is a general purpose programming language. R is more tailored for statistics and statistical computations, but Python is very general, and there is a lot you can do within data science and outside of data science. If you look at the data science community as a whole, I think Python is emerging as the top language for data science. The ecosystem and the tools in Python for data science have been growing very rapidly over the last couple of years, so it’s a great technology to be teaching our students.

General Assembly has several campuses around the world; how do you tweak the curriculum in Atlanta to support the market needs?

We teach a base curriculum throughout all of our campuses globally. But within each market, we do adapt the curriculum based on local student needs and the local market trends we observe.

For example, we have started talking to people in the Atlanta government. They have some interesting data projects that I would like to tie into our curriculum going forward, because it brings local problems into the classroom. Then the students would be working on projects that are directly applicable and relevant to the city in which they live.

The immersive structure forces me to teach differently than a university lecture. An immersive bootcamp is full time, 8 hours a day, so I try to make my lectures engaging – less like formal lectures and more like lessons. I help guide students through a concept, make sure there is plenty of time for students to have hands on activities and labs, and keep them engaged and actively learning. We also teach much more new content in this immersive format than I ever did at university. On average, the students in an immersive bootcamp learn two brand new concepts every day, whereas at university it might be one or two a week. So it’s much more accelerated. I’ve been really happy to see how the General Assembly students have shown the grit and determination to succeed at a very rapid pace.

How many instructors or mentors are supporting students in Atlanta?

How many students do you usually have in each immersive course cohort?

There are roughly 11 students in each Data Science Immersive, and the Web Development Immersive tends to have larger classes and they are offered more frequently. Data Science is offered about twice a year.

The next Atlanta data science cohort starts September 25th. In the meantime I’m doing curriculum development – I’m updating all of our Python curriculum from Python 2 to Python 3.

Who are the students in the Atlanta Data Science Immersive?

I get very excited about the students we have here in Atlanta. They come from a lot of different backgrounds, and most of them are from the Atlanta area. We have people with engineering and tech backgrounds, then we have students with very minimal tech backgrounds. But across the board, I’m excited to work with these students because they are very motivated, determined, they know what they want to accomplish, and they’ve chosen to come to General Assembly to reach their goals as quickly as possible.

Do Data Science Immersive applicants need to have a background in programming?

No, they don’t. We do have some prerequisites for the course, but we help students meet those prerequisites before they start the immersive by offering pre-course work. Students first go through the admissions process, which includes a basic “analysis challenge”, to ensure they have a basic fluency in algebra and statistics. Once students have been through that process and are admitted, they are given the pre-work. That includes online courses in how to program in Python, with basic probability and statistics, so even if they don’t have a tech or STEM background, they can get up to speed by the time the immersive starts.

We monitor each student’s pre-work, we check for completion, and we’re also available if they have problems, questions, or issues, with the pre-work. That’s how we make sure everyone is really ready for the immersive on day one.

What is the campus like? What neighborhood is it in?

Our campus is terrific and it’s in Ponce City Market in Old Fourth Ward. I used to live in Atlanta, but I moved away for seven years, and when I came back, I couldn’t believe what they’d done with the General Assembly space. It’s an older building which has been refurbished to become a great retail space with lots of nice restaurants, plus a lot of other tech companies have moved into the space – Pinterest just moved next door. So it’s got this old industrial vibe with lots of open space, high ceilings, and natural light. I love the space. For the students, we have lots of classroom space, community working tables, a lounge out front where we host workshops and events, and kitchen with free coffee, water, fridges, and microwaves.

I’ve only been to one other General Assembly campus, and I would say our campus feels particularly open and welcoming, just because we have lots of room, high ceilings, and natural light.

There are a number of coding bootcamps in Atlanta now. What makes General Assembly stand out amongst the competition?

I believe that General Assembly is the only full-time, immersive bootcamp which offers data science in Atlanta.

One thing I really like about General Assembly is that in addition to the full-time immersive courses, we also offer lots of part-time and weekend bootcamps, as well as evening events, and community events that bring people together. A couple of days ago I gave an evening data talk, and had people attend from all over the Atlanta community who were interested in data and tech. We had a great discussion for almost two hours. It’s that sense of community that I love about General Assembly.

Tell us about the partnerships with hiring companies that General Assembly has in Atlanta.

Absolutely. A big part of General Assembly’s success comes from networking in the community to see who is hiring, and what skills they are looking for. Then we try to equip students with those skills. We have staff who focus all their time on helping our students find jobs and get placed with companies in the area. Some of our recent graduates have taken jobs at companies like AT&T, Georgia Power, 360i, Vert, and Urjanet.

What types of companies are hiring Data Scientists in Atlanta?

Our most recent Data Science Immersive cohort just graduated, and they’re already in active interviews with a handful of small startups and some larger companies.

Companies from all industries, certainly Fortune 500 companies in the Atlanta area, need data scientists and are hiring data scientists. One difference I’ve noticed is that a lot of tech startups are more likely to go into business with data in the forefront. The larger, more traditional companies haven’t historically had a data science team in their organization, but they are now in the process of learning how to integrate data scientists, and about the value that data scientists offer to their workflows and organizations.

What sort of roles or job titles do you see data science graduates getting? Are they staying in your city?

Because data science is very new, there are still lots of titles that go along with data scientists, other than data scientist. You might see data analyst and data engineer, in addition to data scientist. But if you look at what the role involves, across all those titles and positions, they are taking data, and figuring out how to use statistics and computation to extract insights and information that deliver value to companies. And so that might look like scraping the web trying to aggregate data, A-B testing for marketing companies, or optimizing logistics for transportation companies. I know of some of our graduates who have gone into those sectors. Data science is growing so rapidly because you can apply it so many different domains and sectors.

What meetups would you recommend in Atlanta for a complete beginner who wants to learn about data science bootcamps and data science in general?

Atlanta is also very good at offering a wide variety of meetups in data science, everything from deep learning, to data analysis in Python, to business intelligence. There are a growing number of meetups for those who are interested in data science, and the community around data science here in Atlanta.