From Jack-of-All Trades to Machine Learning Engineer with Galvanize 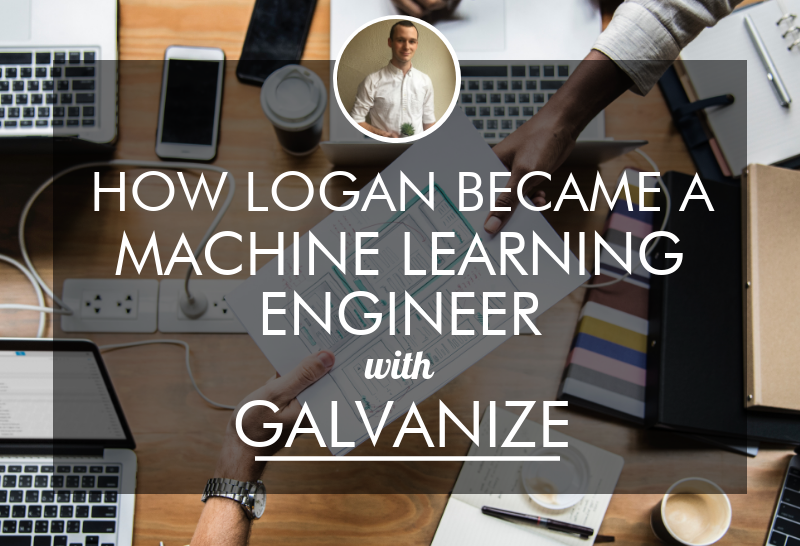 What was your background before Galvanize?

I graduated with a degree in Economics in New York along with my now-wife. We were both poised to go into finance and didn’t really want to. She found General Assembly and did the Web Development Immersive, while I did a part-time Data Science course. That got us both into programming and we loved it. Transitioning to data science fit in perfectly with my favorite part of my degree. My favorite class was called Econometrics, which is - put simply - linear regression in terms of economics. I did the data science bootcamp, loved it, moved home to the Bay Area, and joined a really interesting startup called Appallicious that was founded on doing public good with public data.

At Appallicious, I was technically called a Data Scientist, but because it was a startup, I was doing whatever needed to be done to move the company forward. The work I did there was varied, and that was thrilling. One day, I learned Ruby and worked on permissions, the next day I switched to Docker and Kubernetes, and another day I developed a DevOps setup script using Ansible. Even if I wasn’t doing data science per se, I was organizing a data-driven app and seeing what modern infrastructure looks like, and how to keep consistency in data in a data-driven app. I was able to use inconsistent data to make a product that’s production-ready with models that perform in a homogeneous manner with strange data fields. It was a crazy but fantastic learning experience.

Why did you need to do a data science bootcamp on top of your degree?

The Bachelor’s in Economics could translate into data science relatively well if you take the right courses in statistics, probability, and applied economics. I had focused more on economic theory so I had more to learn when it came to applied concepts. At data science bootcamp, I learned Python and everything you could do with it – that blew my socks off. I ended up getting a lot more applied data science knowledge from Galvanize and it really honed me as a data scientist.

After working as a Data Scientist for 5 years, why did you feel the need to do another data science bootcamp at Galvanize?

I chose to do Galvanize because I was becoming a jack-of-all-trades developer with a data science background and I wanted to redefine myself as a data scientist. After five years of the startup environment at Appallicious, I was missing the in-depth element of analysis. I missed concrete data fields with a concrete objective. I was doing data engineering 90% of the time, even when I worked with data.

Why did you choose Galvanize – did you research other options?

I actually had a fun A/B test going on with two of my good friends - one was studying at Galvanize in San Francisco for six months and the other was doing an MS degree in Data Science, which took two years. I got to see their results and for me, Galvanize seemed to be the most efficient way to get where I wanted to go.

Even before I decided on Galvanize for myself, I had actually met the founder of Galvanize at a conference, told my friend to check out the course, and he now works as a data scientist at Nextdoor!

What was the classroom experience like and who were your classmates?

It was a very diverse group! There were about 30 people from all walks of life, ethnicities, and a better gender balance compared to other tech environments. There were a lot of applied science backgrounds and degrees who wanted to transfer into tech, as well as people from a research background who knew the scientific process but they didn’t have the technical programmatic skills to apply their research. There were some people with industry experience and some people who were fresh to the industry and were really excited and worked really hard.

Everyone I met was just fantastic. The teachers went above my expectations but so did the students. It was a great way to meet people and better understand yourself as a data scientist.

What was the learning experience like at Galvanize and how did it compare to your expectations?

The most surprising part of the data science bootcamp curriculum was the required Pair Programming exercise every afternoon. We’d have a morning lecture, a morning assignment, an afternoon lecture, and an afternoon assignment – and the afternoon assignment was always paired. I was incredulous at first, because, like a lot of people, I assumed I would work better alone. In Pair Programming, one person types and one person drives – which is funny at first to tell someone what to type. But in working through new problems with a second mind, you’re able to look at it in a different way, giving you a more solid foundation in discussions or approaching a new problem for the first time. Additionally, if someone already knows what they’re doing, they can act as a second teacher – it democratizes the knowledge.

We would also do regular case studies, where we broke into groups of four or five and spent a day working on a specific project. The course ends with a final capstone project that you work on by yourself for 2 to 3 weeks. For my capstone, I tried to predict the San Francisco public bus arrival times at stops using historic bus location data and I tried to beat the current prediction times. It was a very complicated project and I didn’t hit all my goals, but I learned a lot and I’m glad I did it.

What did you learn at Galvanize that helped you complete your Capstone Project?

Galvanize teaches you how to learn and how to learn quickly. I learned something new every single day – continuous learning is critical for your professional career and Galvanize was key in helping me structure quick learning.

I had learned how to acquire data from my days at Appallicious – because we used so much public data, I had a pretty good sense of the library of public data available. But at Galvanize, I was able to use a project to optimize the model. The decisions I made to optimize my model and optimize my approach to the data were all informed by methods that I learned at Galvanize. I hadn’t been able to conceive of a general approach, but Galvanize taught me how to optimize it in a rigorous and statistically-backed way. I could figure out what sort of error range to give bus arrival times, when does a bus become totally inoperable, and using different standard deviations to classify different bus routes.

Congrats on landing a job as a Machine Learning engineer at Hustle in San Francisco! Tell us more about the company.

Hustle is a peer-to-peer text messaging platform for connecting organizations to their followers. Essentially, organizations like Sierra Club can enlist their followers to send text messages out to their followers to come out to an event, support legislation, contact a senator, etc. It’s a way to promote conversation between agencies and their users and has been extremely effective. We’ve had an amazing impact already and I think it’s encouraged a lot more people to care about and be engaged in politics.

Did you go into Galvanize with the intention to be a Machine Learning Engineer?

I went to Galvanize to become a data scientist again, but as I started talking to people in my class and exploring the job market, I realized the skills I had gained at Appallicious were really useful and set me apart. I knew the ecosystem and knew how to get data into the set in the first place, in addition to deploying the model, reviewing its performance, and updating it. I ended up applying for a few positions for Machine Learning (ML) engineers. Machine Learning seemed to be the role where I could be most helpful to a company – it feels good to be useful.

In 2019, everyone is suddenly very aware of data privacy – is it important that you choose roles that are using data in an ethical way?

Absolutely. When you’re applying to jobs, you always have your priorities. My top tech companies are going to be doing ethical, socially responsible work with data, and are people who believe in open source data. People call data “the oil of the information age” and while it can be used in terrible, terrible ways, it can also be used in some pretty amazing ways to benefit people. Working at Appallicious showed me the possibilities of data and what it can do. I’ve had the ability to follow a moral compass in my career. It’s not easy, and not everyone gets the opportunity to do it, so I feel very lucky to be able to include that in my decision making process.

How did you get the job at Hustle and how did Galvanize help prepare you for the job search?

I got the job through a referral from an old friend, but Galvanize had an amazing career coach, James Van, who was critical in putting me in a successful mindset. A lot of scientists aren’t good salespeople because we’re naturally skeptical – especially of ourselves. But because of James, I was able to speak to my abilities much better and to formalize my experiences into words.

At Hustle, are you using what you learned at Galvanize or have you had to learn on the job?

It’s only been a few months, but a lot of what I learned at Galvanize I’ve been able to translate to my job, like knowing different model trade-offs and methods. I work a lot with Natural Language Processing (NLP) since we work with text messages. At work, if I haven’t worked on a specific model, I get to work with other data scientists and get context from how they approach it. I’m both indirectly and directly using what Galvanize’s bootcamp taught me.

What advice do you have for other folks who want to go to Galvanize or another data science bootcamp?

Don’t be afraid to try to break things. A lot of the way I learned was by trying something crazy, different codes and models, breaking things, and then discovering why it broke. When you understand why you’re breaking things, you better understand what’s going on under the hood. Don’t be afraid to break things, learn, and figure out how to fix it.

Find out more and read Galvanize reviews on Course Report. Or check out the Galvanize website.