From Banker to Software Developer with The Software Guild 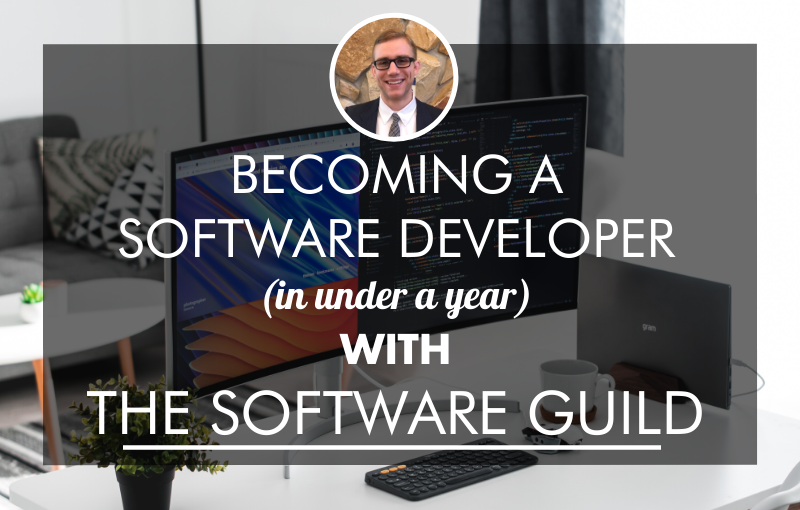 Ben Lindau was a banker with an economics degree who knew he wanted to be coding for a living. Instead of moving further into his banking career, he switched jobs to work for a non-profit and enrolled in The Software Guild’s Online Java Program. Ben tells us about balancing his full-time job with the online coding bootcamp, The Software Guild’s “excellent system” for providing support from instructors, and how he landed his job as a Developer at the headquarters of a big box tech retailer in Minneapolis!

What's your background before coding bootcamp?

I did my undergraduate degree in Philosophy, Politics, and Economics. Toward the end of my collegiate career, I got a little bit of experience with coding and enjoyed it. I decided that coding was what I wanted to do, even though I was still in the Economics Program. I ended up going into banking. After about a year and a half of that, I left the bank to pursue coding. I got a job at a non-profit for about a year and a half. Six months into that job I found The Software Guild.

What made you choose The Software Guild’s online program?

I wanted to be able to work full-time while I was pursuing a coding program. I looked at Prime Academy and a university program. Neither of them had the schedule I was looking for. I was living in Minneapolis so I liked that The Software Guild had a campus nearby and that I could go to the campus to get help if I needed it.

Did you try learning online yourself before deciding on a bootcamp?

When I was working in banking I heard about people who had worked their way into programming step by step throughout their career. So I took the MIT open course for Python and did some Codecademy courses but none of those skills applied well to a career. I knew that if I continued in banking I would be headed further into client services and I didn't want that. I decided to find a course that would set me up for a career in the field that I wanted to be in versus staying in something I didn't like while trying to make both careers work.

Did you think about going back to college to study computer science?

There's a private school in Minneapolis called St. Thomas that has a master's in Data Science program which actually would've complemented my economics program. It ended up being a considerably longer course. I was anxious to get on with my career and I didn't want to spend the next four or five years back in school.

How were you able to pay for The Software Guild?

I was making a decent salary in banking and I had built up some savings. I used that to pay for bootcamp and my living expenses that weren’t covered by my non-profit position.

What was the application and interview process like at The Software Guild?

They gave me an aptitude test with math and logic that were applicable to programming to test my thought process. Then I filled out the registration and financial paperwork. After that, I went to the Minneapolis campus and met with Kipp, the career advisor, and a couple of the instructors for a casual interview. I started a few weeks later. It was smooth and not very complex.

What lead you to choose the Java Program rather than the .NET/C# program?

I had a family friend who is a developer. When I first started getting into programming, I sat down and asked him for some advice. He suggested I learn Java for a solid career path.

What was the learning experience like in The Software Guild’s online program?

There are 10 sections that each take about a month to complete. I set some personal goals to complete one section per month for 10 months. The sections were made up of one reading section, a code along portion with a template, and a self-coded portion to create a program. Each milestone stacked on top of the last one to build a larger program.

I was working a pretty flexible job so I had time to work on it there and at home. It ended up being a bit more intense towards the end. I started out working on it about 15 to 20 hours per week, and found myself putting in 20 to 30 hours per week toward the end. The more complex it gets, the more time involved.

How often did you interact with instructors and other students?

I worked with instructors a couple of times a week. I was assigned one instructor to be my general point of contact. There was a set time on a weekly basis to meet with them to make sure I was getting everything done. There's also an online slack channel for the students to communicate on. There's one for the online Java program, one for all online students, and one for all Java students (in person and online). You can see who's working on the same section as you are, you can see questions and answers, instructors' inputs, and all of that. On the online Java board, you'll get answers from different instructors, depending on the time of day they were available. It was an excellent system for our online program.

Did you visit the Minneapolis campus much during the program?

I didn't end up needing to. They give you great counseling with the weekly instructor meetings, the slack boards, and the ability to Skype with the instructors.

How did you balance your job with the online coding bootcamp, and stay on track?

It came down to discipline. The online gig is much more of a personal accountability game than the in-person class. I personally like routine. At the time I was working full time as an Assistant Manager of a non-profit group home for adults with disabilities. I designed my schedule to go to work, go to the gym after work, and then code at the end of the day. The fewer commitments you have the easier it is to take on coursework.

My job knew I was taking a course. A lot of people who worked there were students. It was a good environment to be in during the course.

What projects did you work on at The Software Guild?

The course is broken up into two halves. The first half focuses on object-oriented programming which is writing console applications for a Java environment. They don't necessarily have a ton of applicability outside of your own computer. The second half was designing web applications. It was fun to get to start building applications that you can pull up in your browser, interact with, and add visual elements to in the second half.

What career guidance did The Software Guild provide?

That was probably one of the most helpful portions of the course. There's a career counselor whom I started working with about three weeks before I finished the program. I met with him every week after I graduated until I got a position. They have resources for finding jobs, interview counseling, and resumé building. They have a lot of contacts in my area which was very helpful. They did a career fair day on campus in Minneapolis where you can have speed interviews with a bunch of different companies in the city which actually led me to a position. It was a great resource to have.

I graduated from The Software Guild at the beginning of summer 2019. It took me less time than planned. I finished a couple of weeks early!

Congrats on landing your job! Can you tell me about your role?

I'm a Developer at a big box tech retailer headquartered in Minneapolis. I’m on the search engine team. The campus probably has a few thousand people on it. My team, specifically, is about 20 people.

This time of year, as we’re getting close to the holiday season, we're finalizing some code on the search engine and managing a lot of product databases. It's been interesting so far. I've been there now for six weeks so I'm just finishing up my first couple of projects here. It's the field I've been trying to work in for the last several years so it's nice to get my feet wet and jump right in. The community is very positive too. I've liked it a lot!

What sort of training or onboarding did you receive at your new employer?

It's an extremely busy time for our team right now with the holidays coming up. There was not as much onboarding or counseling as there might have been at another time of year. That's sort of a testament to The Software Guild that I was able to get through the onboarding and start working on projects in the second week.

Are you using Java and other technologies you learned at The Software Guild?

I definitely appreciated the framework that I learned at The Software Guild. I'm using a lot of similar processes that they taught there. It's been nice to have that prior experience moving into this job, but there's always new stuff to learn.

How has your background in Banking and Economics been useful in learning to code?

The biggest part is knowing the learning process and what you have to put in if you want to learn a skill well enough to do it professionally. Having some prior experience in the workforce was definitely a big help. I'd worked at other Fortune 500 companies in the past so I already understood the corporate environment and what it takes to be successful there. It doesn't necessarily apply to coding but it has helped me in the workplace.

What would you say has been the biggest challenge or roadblock in your journey to becoming a Software Developer?

Honestly, the biggest roadblock was having to have some type of formal training. Having a place like The Software Guild that was accessible and flexible while maintaining a level of income and my own personal goals was key.

Do you think it would've been possible to get to where you are now with self-teaching?

If it was, it would not be for a long time. It would've taken me a lot longer to get to where I am now. I would not have been able to get where I am without the help of The Software Guild. They're running a good ship over there.

Since you've graduated, have you stayed in touch with anyone from The Software Guild?

Yeah! One of the other students in Minneapolis and I have been in touch. We were both looking at similar jobs and he just got a job as well. We talked when we were interviewing about how our interviews were working out and now we've talked about landing our jobs. It's nice!

What advice do you have for other people who are thinking about making a career change through an online coding Bootcamp?

Anybody can do it if you're willing to put in the time that you need to really learn the skill. It's definitely a function of time put in.