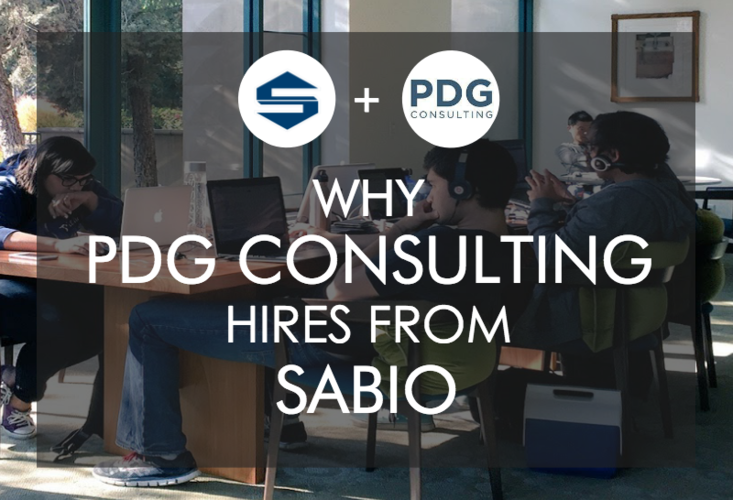 With clients like Sony Pictures, Warner Brothers, and AT&T, the five (5!) Sabio grads who landed jobs at PDG Consulting are working on some seriously exciting projects. We sat down with HR Lead Domenick Calise to find out how he works with Sabio to recruit Associate Software Engineers onto the technical team at PDG. Read on to learn what separates Sabio graduates from other bootcampers, how Sabio developers have adapted to learn new programming languages on the job, and why PDG Consulting will be hiring more Sabio graduates in future!

Tell us about PDG and your role there in talent acquisition.

PDG is a software development consulting firm specializing in media and entertainment. We work with some of the biggest players in media and entertainment: Warner Brothers, CBS, Sony Pictures, Fox, NBC, and AT&T. We develop software that helps them track and manage different aspects of their business like IP rights licensing and distribution, delivery of targeted ads, as well as Financial Incentives.

I wear a lot of hats at PDG, but mostly handle our People Operations.

How many Sabio graduates have you hired so far?

I hired our first Sabio fellow in September 2016 after connecting with him on LinkedIn. I actually had no idea what Sabio was! I brought him in to interview and he met with one of our senior developers at the time who was really impressed with his knowledge and said, "This guy really knows this stuff."

After that, one of our senior developers left PDG to work at Sabio as an instructor. I stayed in touch with him, and now, every time Sabio has a graduating class, I go meet with a handful of the students. I tell them a little bit about PDG and give them a little bit of interview experience.

Since September, we've hired five developers in total from Sabio including Ariana Rodriguez.

How large is the dev team at PDG?

We have around 65 employees right now, and about 90% of them are developers. We're a pretty dev-heavy team, but also have some business analysts and a QA team.

What roles are you hiring those Sabio graduates into? Are they going into internships?

At Sabio, students learn .NET – does that line up pretty closely with the languages your developers work in at PDG?

One of the things that stands out about Sabio versus some of the other bootcamps that I've interviewed candidates from is that Sabio has more of a focus on C# (Object Oriented Programming). I feel like a lot of the other bootcamps place more emphasis on front-end JavaScript libraries and while that's great, PDG  needs to hire developers with a solid understanding of object oriented programming principles, not just JavaScript. I would say that their C# students tend to be a better fit for us.

Have you had to convince your company (or yourself) to hire developers without that traditional computer science degree?

I didn't really have a difficult time trying to “sell it.” We’re a small tech company in LA. When you’re in the shadow of giants in a booming tech scene, you have to get out of the office and build your brand in the community. I go to college recruiting fairs, meetups, utilize referrals, and I recruit from LinkedIn and Stack Overflow. I tap into as many unique pools that I can get to. As long as there is a talent pool, I'm there. Sabio has been a great opportunity to build that brand in the local community.

Once you get the courage to hire your first bootcamp grad, I bet a lot of companies go back and hire more. They're worth taking a chance on.

Did you notice differences in hiring from a bootcamp versus those more traditional channels?

I think bootcampers are absolutely valuable. The owners of PDG are all very smart, and they’re confirming that the students we're hiring from Sabio are very bright.

One of the things that a coding bootcamper lacks versus more experienced developers or Computer Science graduates is an in-depth understanding of object-oriented programming principles. And that just means it takes a bit longer to train, and that's not an issue for us. Our Sabio new hires spend a month or two with one of our Directors of Engineering, they get a good feel for some of the systems that we’re working with, what the code looks like, and who our clients are. So it might take a little bit of time to get them up to speed, but as far as their skill and their talent, Sabio grads are spot on.

There are a lot of coding bootcampers competing for jobs these days. What stood out about the developers that you hired from Sabio?

It sounds cliché, but I’m looking for candidates who will perform very well in our environment. Whenever I go in to interview, there are at least two students that stand out – whether it’s their personality or culture fit or their sense of passion for tech.

The Sabio students all have really interesting backgrounds. We hired a woman who had experience as a data analyst and then she went back and decided to take a deeper dive in software development and that worked out great. Another one was a Business Analyst prior to Sabio, decided to get more comfortable with code. A lot of the times, coding bootcampers have prior experience within the tech industry and that translates very well.

We don't only hire people who have experience in the tech industry. We hired someone who went to school for Economics and another who studied Applied Science.

Have you hired from other coding bootcamps yet?

I have not. I've interviewed applicants from Hack Reactor and General Assembly, and we give them the same whiteboard challenges that we give all of our applicants. But Sabio students’ technical skills seem to be a bit stronger.

Do you pay a referral fee for your Sabio hires?

No, Sabio just invited me into their community. For them, it's more important that the Sabio fellows are finding jobs, rather than Sabio making money from referrals. So they haven't charged us a dollar and that’s been great.

Could you give us an example of a project that a Sabio student is working on now at PDG? What do they work on day-to-day?

Three of our Sabio developers are embedded with the same client and working on a business intelligence project. They're doing an ERP implementation and then they're building custom reporting as well as a portal in C#. One of them is working in SQL and the other is focusing more on the front-end.

Another Sabio developer is embedded at Fox and she is working on their IP rights licensing and distribution. Something interesting is that she's actually working in Java, even though all of her experience is in C#. She got thrown into the fire a little but from my understanding, she's doing really well. We were able to bring her onto that project and nurture her, so she's in good hands.

We have another developer at Sony Pictures, working in Java as well and working on new functionality within an application that we've already built.

It can be tough to transition from a coding bootcamp to a developer job. How do you ensure that new hires are supported when they get to PDG?

I think that the best way to learn is by doing. Our new hires are always paired with a senior developer or put on projects where there is an opportunity for mentorship. We have a little bit of flexibility and we take the time to be patient and understand that they're going to make a few mistakes.

There's never an instance where a new developer is thrown into a brand new client on a team of two and they're just going to be up a creek without a paddle. We do our best to ensure that the projects we're placing any of our entry level developers on are ones that have support readily available.

Have any of your Sabio hires been promoted or been given more responsibility since you started hiring from Sabio?

Gilbert is doing a great job and recently got a title bump. We just started hiring Sabio grads in September, so nobody has been promoted yet. But I get great feedback from clients on all of our Sabio hires, so there's no doubt in my mind that they're going to be moving up the chain.

Is there a feedback loop in place? Do you get to give feedback on the Sabio curriculum?

Yeah, Sabio asks me for feedback all the time. So far I haven't had any feedback because everyone's been doing such a great job. The only thing that Sabio grads lack is work experience. I mean, a bootcamp is trying to pack four years' worth of education into six months total. It's tough. What I like about Sabio is that the students actually get experience working on real projects. In a CS degree, you study theories and methodologies before you start practicing. That’s an advantage, but Sabio grads are getting hired and they've been doing a great job.

Sabio’s placement rate is over 90%. So even if we can't hire a Sabio developer, I know that someone else will, and then they may end up back at PDG in a couple of years. My biggest advice to Sabio students is to get as much practice as you can, get a little bit of exposure and understand the methodologies within the object-oriented programming.

Will you hire from Sabio in the future?

Of course, I will!

Honestly, I think it comes down to just giving coding bootcampers a chance. When I started recruiting and bootcamps were just getting popular, a lot of people were hesitant.

Sometimes you need to go out on a limb and hire someone based on their skills. You will realize it might just take a little bit of hand-holding, but you'll get a quality developer. You just can’t be afraid to give it a go.

Find out more and read Sabio reviews on Course Report. Check out the Sabio website.