Balancing Full-Time Work with Learning to Code at Hackbright Academy 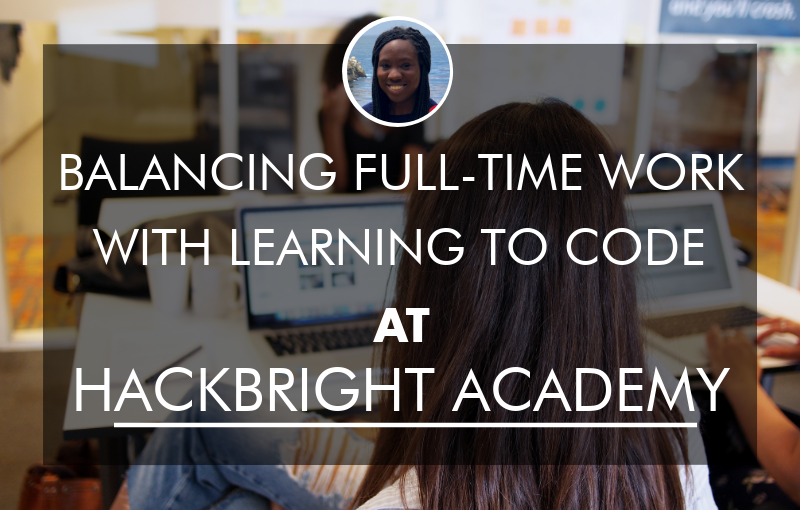 Takia’s background involved biology, robotics, and automation, but she was ready to expand into coding as a career. She initially took Hackbright Academy’s Prep course, but decided not to pursue their full-time program as she didn’t want to quit her job. When Hackbright launched their part-time program in 2018, Takia, jumped at the chance to learn to code, while continuing to work. Takia tells us about the fun of learning alongside women, how she balanced her job with Hackbright Academy, and how she landed a Software Engineering Apprenticeship at Twilio!

What was your background and how did it lead you to Hackbright Academy?

I majored in Biology at UC Santa Cruz and my original goal was to go into biotech. My first job after college was at Transcriptic, a robotics cloud lab startup, where I worked on executing assays – that was where I got introduced to coding. While I wasn’t actually writing the code, Python was used to create the protocols that ran on the automated systems I was working with, so I was interested in learning more.

I tried taking online courses from sites like Codecademy and Coursera, but I realized I was more of an in-person learner. Two of my coworkers had done the Hackbright Prep Course. I saw how much they had learned – they could write awesome code from only a prep course. I signed up for it and learned a lot but definitely knew I wanted to learn more.

Why did you decide to do a coding bootcamp?

Ultimately, I was hoping to get a position in full-time software engineering. I had a great experience taking the prep course. I had become accustomed to Python, and I really liked that it was all women and that their goal was to get more women into tech, so I wanted to continue with Hackbright. After I finished the prep course, Hackbright only had a full-time program at that point so it would have required me to quit my job, which I wasn’t ready to do. I tried a flexible online course with Flatiron School but I realized the online element wasn’t working for me. I’m not a great online learner but at the time, I felt it was the only option because there weren’t many in-person part-time bootcamps in my area.

In the meantime, I got a new job at a biotech company called Invitae and was working on the automation team supporting the robots and troubleshooting errors. I still wasn’t doing a lot of coding – a bit of Javascript here and there – and was missing the coding aspect of a job. I was worried I’d lose the skills from the Prep course over time if I wasn’t using them on a daily basis! One day, I randomly checked Hackbright’s website and noticed they had started offering a part-time software engineering program! I got super excited and immediately applied for the next cohort.

What was the Hackbright Academy application and interview process like?

I first had an informal interview with Dory about how I got into coding and why I wanted to attend Hackbright. Then I had the technical interview with Maggie through CoderPad where they gave me a problem and we worked on it together. I actually didn’t pass it the first time but they let me take it again a couple of weeks later. I reviewed some Codecademy resources and brushed up on my Python skills, and when I retook it I passed and got accepted!

To pay for the bootcamp, I took out a loan for Hackbright through their financing partnerships and will be paying monthly installments. I was also lucky that I had a job while taking the course so I could afford to make the payments.

There were 11 of us with people from different backgrounds and career paths ranging from graphic design to mechanical engineering to HR. Most were working – some were full-time, some were part-time, and there were a few moms in the group. The all-women learning environment was definitely a new experience for me, but it was fun and I learned a lot from all of them.

What was the learning experience at Hackbright Academy? What was a typical day?

A typical day was attending class on Monday and Wednesday evenings from 6pm to 9pm and then an all-day class on Sundays from 10am to 6pm. During the weekday sessions, we’d have a lecture for an hour and a half, take a break, then do pair programming to solidify what we’d learned. About halfway through the program, we started focusing less on lectures and more on working on our individual projects and getting help from instructors.

There was some work outside of the structured class hours. Sometimes we wouldn’t get through the pair programming in class or sometimes I wanted to brush up on concepts. Also, after learning a portion of new material, we had graded take-home assessments.

Did you have a favorite project you worked on?

We each had an individual major project for the bootcamp and I made a travel app for planning trips with friends. It was a full-stack project, built on a number of languages like Python and Javascript, and I had to create the front end, the back end, and the database. I also utilized the Google Maps API which was the hardest, yet most rewarding part about working on that project once I got all the components working.

How did you balance attending Hackbright Academy while working full-time?

In the beginning, it wasn’t too bad because it was a lot of review for me. When we got into subjects I was less familiar with, it got a bit harder to balance both school and work, plus I started getting additional projects at work. My schedule was also pretty weird because I worked Tuesday through Saturday and then had classes on Monday, Wednesday, and Sunday - so I didn’t have a full day off from anything. Luckily, my boss was very supportive and we switched my schedule so I had Thursdays off during the rest of the program (and saved my sanity!).

What types of career assistance did Hackbright Academy provide?

Career support and interview preparation are definitely things that Hackbright does well. We did lots of whiteboarding practice. Instructors showed us how to use HackerRank, a tool that companies use to send you take-home problems. That was beneficial because it meant we wouldn’t be surprised with learning a new tool during an interview process. We also did a couple of whiteboard sessions with software engineers at partner companies and would whiteboard with a partner engineer.

Towards the end of the program, we had a Demo Night and presented the apps we had built for our final projects to representatives from companies that were looking to hire software engineers. I got two interviews from the Demo Night!

Congrats on your new job! How did you land the Software Engineering Apprentice role at Twilio?

It was actually quite random! I was on LinkedIn and someone had liked a post about Twilio’s Hatch apprenticeship program. I went to their website and thought it looked really interesting so I went ahead and applied for it. Also, Hackbright has an alumni support network and the apprenticeship had actually been posted in the Slack channel.

I was still working at my previous job during the job hunt, which I started pretty much right after the course. It all happened pretty fast – I graduated from Hackbright on December 3, 2018, and got the offer from Twilio on January 30, 2019.

What does Twilio do and what is your role there?

Twilio is a cloud communications platform that lets web developers embed different types of communications into their app like messaging, video, SMS, and voice. I’m one of nine apprentices, four of which are from Hackbright! Right now, I’m working on a project with the group but we’ll get moved to more permanent teams once the apprenticeship program ends. I’m currently using Python but I’ll be working mostly on Javascript and React with my permanent team. We went over React at Hackbright, but I’ll need to brush up on it before I join the team.

How is the apprenticeship going so far?

It’s been going well. They’ve been slowly exposing us to how everything works and how we deploy code. We have mentors and the apprentices help each other out a lot. We all have different knowledge on different languages, so if someone has a question, someone else might be able to help. The neat thing about this program is they only give the apprenticeship to people from non-traditional backgrounds. None of us have degrees in Computer Science. Also, from what I can tell, there seems to be a higher number of women in software engineering roles at the company compared to what I’ve seen at other tech companies.

How do you think your previous experience in science and automation is helping you in your new career?

I had to do a lot of troubleshooting in my previous job, so I think that will play a big role in my ability to succeed as a Software Engineer. Also the automation and software at my previous jobs were constantly changing, so being able to pick up new technology quickly was key.

What has been the biggest challenge or roadblock in your journey to becoming a Software Engineer?

I think the biggest challenge has been the feeling of “imposter syndrome.” I’ve had to step back and realize that I’m capable of being a software engineer. My employer chose me for a reason and they believe that I’m capable.

What advice would you have for other people who are considering a career change through a coding bootcamp?

Definitely make sure it’s something you want to do - it’s a huge time commitment and I didn’t see friends for a few months. I’d also suggest not to feel discouraged and give up when you feel that you are not grasping a certain topic. I think everyone feels that at one point or another during the program. I got stuck so many times in the program but perseverance is definitely rewarding once you’ve figured out the problem. Also don’t get fixated on comparing your progress to other classmates. I think people tend to feel like they are the furthest behind in the class, when in reality everyone is probably feeling the same way. Utilize your instructors and classmates while you have them and don’t be afraid to ask questions, because more likely than not someone else was probably thinking of the same question!

It’s a lot of effort to work full time, on top of doing a bootcamp, but it’s definitely rewarding once you get through it and you’ll gain a lot of friends from the program. Don’t forget to take care of yourself – get some sleep!