Learning your first programming language is a huge step in your journey to becoming a developer, but if the learning stops there it can dramatically impact your career prospects and income potential.

Technology is emerging at an unprecedented pace, with new coding languages created every year to keep up with this rapid innovation. Believe it or not, there are currently more than 500 programming languages, and that number continues to rise!

Companies like Shutterstock that used to be dedicated to only one language (Perl) are now multi-lingual with a developer team that programs in Node.js, Ruby, Java, Python, PHP, and Objective-C. A company using multiple programming languages isn’t the exception, it’s the norm.

So, here’s the million dollar question: Can someone really become a successful developer only knowing a single programming language? While there are specialized roles in single languages, including JavaScript, the majority of companies and jobs do, in fact, require knowledge of multiple programming languages.

1. More Tools To Get The Job Done

As a developer, the end goal isn’t learning as many languages as you can, or even learning how to code. Instead, it’s about being able to look at a problem and figure out what tools (read: programming languages), you can bring in to get the job done. Naturally, the more tools you have under your belt the more ways you’ll be able to tackle different problems.

Just as there are hammers, screwdrivers, sanders, and an array of other tools for different tasks, there are countless programming languages, with each serving a unique purpose.

2. Pick and Choose the Jobs You Love

Knowing a variety of programming languages, especially in this day and age, helps open up the job market tremendously.

Let’s say you recently graduated from a coding bootcamp and are ready to dive headfirst into the field of programming. There are dozens of companies looking for junior developers, although you find only a fraction of them are hiring for the language you learned while attending a coding bootcamp. By default, only knowing one programming language automatically limits you to fewer roles.

Take a look at the market demand for each of these 9 programming languages: 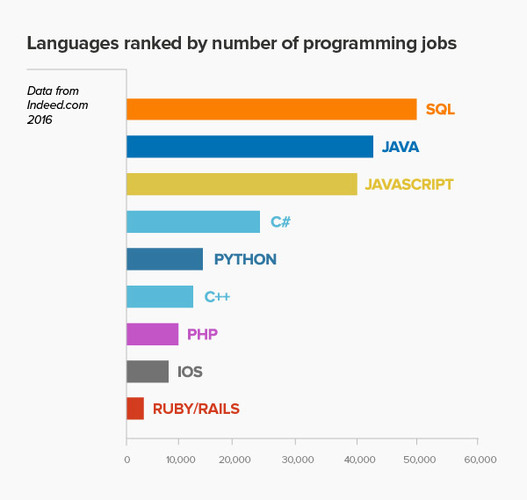 Having a solid grasp of multiple programming languages, on the other hand, means you have an edge in the job market and qualify for a wider range of job opportunities. You can pick the role and company you love, rather than settle with the limited options you’re dealt with after graduation.

More languages equals more money. Don’t believe me? Here’s a recent blog post that highlights the increasing number of companies looking for developers who can work across a number of different functions (and what they’re willing to dish out in return):

And while companies are often [cross-functional developers] to keep costs down, they’re also prepared to pay more to get someone who can switch between projects and has three or four programming languages at their fingertips. In fact, they’re prepared to pay up to a year more for developers who can work in multiple languages.

Facebook is another example of a company that uses a mashup of languages. Facebook.com’s front-end is built on JavaScript, back-end built on Hack, PHP, C++, Java, Python, Erlang, D, Xhp and Haskell, and its database on MySQL, HBase and Cassandra.

Additionally, there are several contributing factors when it comes to determining a developer’s salary. One being whether or not someone is a front-end, back-end or full-stack developer. Full-stack developers know all aspects of the development process, and can use both front-end and back-end technologies, making them more valuable to a company. Because of this, companies are willing to pay an average salary that tops out at roughly $20,000 higher than that of a front-end or back-end developer.

4. Don’t Get Left Behind: Become A More Versatile Developer

One of Coding Dojo’s lead instructors has been in the industry for 25 years. During that time, he’s learned more than 20 different programming languages! Throughout his career he applied for jobs not knowing any of the languages they used, but was still hired because he showed that he was able to quickly learn, and run with, new languages and technologies.

Being a versatile developer and knowing multiple programming languages means your skills will never become outdated, and you can quickly adapt to industry trends. You can use your vast knowledge of software and web development to keep your job opportunities varied and fresh. Even if you get hired on to work as a programmer for a specific programming language, it’s not unusual for companies to switch course and decide to move to or bring in new technologies. In this day and age, you really can’t afford not to know more than one programming language!

Additionally, if you’re a beginner interested in learning more than one programming language check out Coding Dojo’s on-site and online bootcamp, which teaches 3 full technology stacks in 14-weeks. Coding Dojo also has an awesome Dev Accelerator program where programmers can pick up a new language in as few as 4 weeks.

While the idea of learning an additional programming language may feel daunting at first, especially if you’re just starting out on your journey, be reassured that it is possible with the right instructor support and learning environment.

Want to learn more about Coding Dojo? Read Coding Dojo reviews on Course Report or check out their website here!

Katie Bouwkamp is the Director of Communications at Coding Dojo, a 14-week, comprehensive full-stack web development training program to meet the career goals of both aspiring developers and industry veterans.