Why Simple Contacts Hires from The Grace Hopper Program 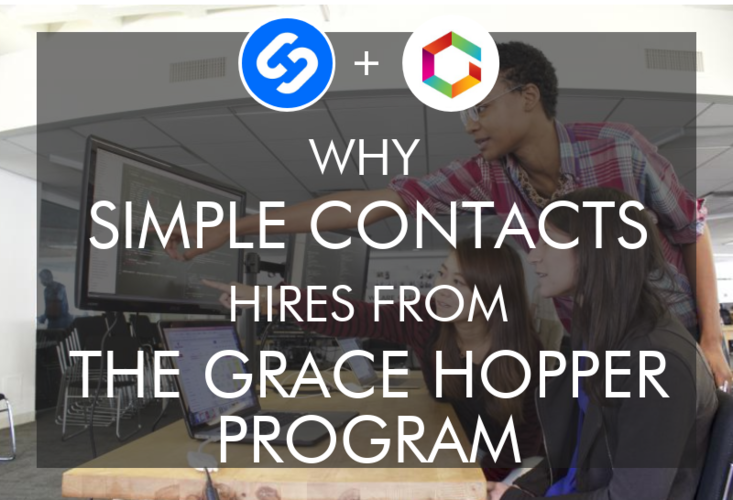 Emily Maskin has hired three Grace Hopper Program graduates for contact lens startup Simple Contacts. As the Engineering Manager for the web team, Emily took a chance on hiring her first bootcamp graduates (all women) and was blown away by the caliber of their skills. Learn what stands out about a Grace Hopper Program graduate, read Emily’s tips for employers on how to hire from bootcamps, and find out why she will always choose the hard working and delightful junior developer over a difficult senior developer.

Tell us about Simple Contacts and your role there.

Simple Contacts aims to make it easier and more affordable for contact lens wearers to renew their prescription via a quick vision test taken from home through your phone or computer. The test is designed and reviewed by doctors to replace costly and unnecessary office visits. We are a fairly young startup but growing quickly. As one of the first team members, my role has evolved from engineer to web team lead, managing the development of the web version of our product. The web team currently consists of three engineers, all women.

We have three Grace Hopper graduates on the team. The first applied to us through Tech Ladies and ended up being such a great hire that we were enthusiastic about bringing in more graduates of the program.

What roles have you specifically hired Grace Hopper graduates for?

All three of our Grace Hopper graduates are JavaScript engineers  – one on the web team (with me), one on the mobile team, and one on the backend/API team.

Other than Grace Hopper, how do you usually hire developers?

It really varies. Many of our developers, especially earlier on, came as referrals from existing team members. Some we’ve found on LinkedIn or Angel List; others have applied directly. One I even met in a Lyft Line!

Do you notice differences in hiring from a bootcamp (vs. using recruiters or hiring from colleges etc)?

On the whole, I think bootcamp grads have more web-specific/real-world experience, whereas computer science grads have a stronger background in fundamentals. Both are valuable! We haven’t had a need for recruiters thus far.

Does Simple Contacts aim to hire more women engineers? How does Grace Hopper factor in that initiative?

Very much so. It’s something that’s incredibly important to me personally – I’ve been the first female engineer at every single dev job I’ve ever had, and I want us as an industry to do much, much better. I’m super thankful that Simple Contacts cares about it just as much. Out of about 14 or 15 developers across all our dev teams, six are women. This is a better ratio by far than anywhere else I’ve worked, and we are still aiming to improve it. Three out of those six women came from the Grace Hopper Program.

Do you see bootcamps being a viable channel for recruiting developers?

In my experience, not all bootcamps are created equal. I’ve known a lot of tech managers (I used to be one of them!) who are reluctant to hire from bootcamps because of not feeling like they have the resources to bring a brand-new developer up to speed. We took a chance and have been blown away by the caliber of all three of our Grace Hopper grads.

Have you worked with any other coding bootcamps yet? What stands out about these Grace Hopper bootcamp grads?

Simple Contacts doesn’t have grads from any other bootcamps at this point, which is not to say we never would. Grace Hopper seems to do an exceptional job preparing its students for the job market, with complex real-world projects for their portfolio, interview practice, and a wide network.

Have you tweaked the application process for non-traditional applicants at all?

We aim to look at all the strengths a candidate brings to the table, not just raw technical ability. Above all, we want to hire people who are smart, motivated, positive, and generally awesome to be around.

Tell us about the women you’ve hired from Grace Hopper.  Did they go through a technical interview? How did they do?

Yes. Our interviews involve a code-pairing session where we look to see how the candidate works through a problem. There’s less focus on finding the perfect solution and more focus on the right considerations, asking good questions, making informed choices, etc. All three did great and clearly demonstrated how smart they were!

What stood out about the Grace Hopper students you hired?

Their final projects have all been really impressive, and a great indication of the students’ ability to build complex applications. We also look for the ability to learn quickly and work through challenges (see code-pairing session described above). Culture fit is important for all our candidates, but it has a lot more to do with being someone who’s good to work with, rather than having the same personality as everyone else!

How important are candidates’ backgrounds from before they went to Grace Hopper? Do you factor their previous backgrounds into their suitability for the roles?

An applicant’s earlier experience can definitely help round out their candidacy. One of our Grace Hopper grads was previously a math teacher; another has a background in penetration testing. We’ve ended up with a team with a really wide range of backgrounds, and that has been a huge asset for us.

Did you have to convince your company (or even yourself!) to hire a bootcamper? What was your hesitation?

It was less about hiring a bootcamper specifically, and more about hiring a brand-new developer and whether we had the bandwidth to mentor them and get them up to speed, for our sake and theirs. But it’s worked out great!

Has it ever been a concern for you that these new hires don’t have a traditional computer science degree?

No, I’ve known plenty of successful developers who don’t have a computer science degree. I personally am mostly self-taught, and all our Grace Hopper grads came out of their program leaps and bounds ahead of where I started.

Are your bootcamp hires using JavaScript like they learned at Grace Hopper or have they needed to learn new languages?

Yes, nearly our entire stack is in JavaScript. We have a small amount of code in Python that we’re starting to phase out, so they have had the opportunity to dabble in that a bit, but all three are working as JavaScript developers.

Could you give us an example of a project that a Grace Hopper student has worked on?

Examples include building and iterating on workflows for users to get their prescriptions and lenses as quickly and seamlessly as possible, leading engineering efforts for new experimental brand propositions in conjunction with the marketing team, and implementing GraphQL into our codebase.

How do you ensure that the new hires are supported in continuing to learn in their first jobs? Do you have mentoring or apprenticeship programs in place?

I care a lot about helping new engineers (especially women) develop the tools to succeed. I don’t feel like I had good mentorship in my first few years in the field, and it’s important to me to try to do better for those who come after me. We don’t have an official mentoring program, but we make learning and growing a key part of our culture. All code goes through review – with not just the more senior team member reviewing new hires’ code, but also new hires learning by reviewing other people’s code. We have small teams with lots of collaboration, and the opportunity to wear many hats and learn about any area that interests you.

Since you started hiring from the bootcamp, have your new hires moved up or been promoted? Or do you anticipate that they will?

Yes, all of them either have already, or I have no doubt will do so in the near future.

What does the relationship look like between Simple Contacts and Grace Hopper? Do you pay a referral fee?

My understanding is that their graduates pay deferred tuition upon starting their first dev job. We don’t have an official relationship with Grace Hopper where we pay a fee, just an appreciation.

What is your advice to other employers who are thinking about hiring from a coding bootcamp or this bootcamp in particular?

I can’t say it enough – just hiring super-senior “10x” developers will not make for a successful team. We have created an amazingly successful, productive, and motivated engineering department by seeking out people from different backgrounds with different strengths. We have our very experienced engineers, for sure, but we also have people with awesome design chops, communication skills, and project management abilities. One of our four criteria for performance reviews is “Don’t be a jerk” and we are very serious about it. As a manager, if given the choice to lead a group of “junior but hardworking and delightful” developers versus “incredible technical expertise but a pain to deal with,” I will choose junior every single time.