Why EverQuote Hires from Launch Academy 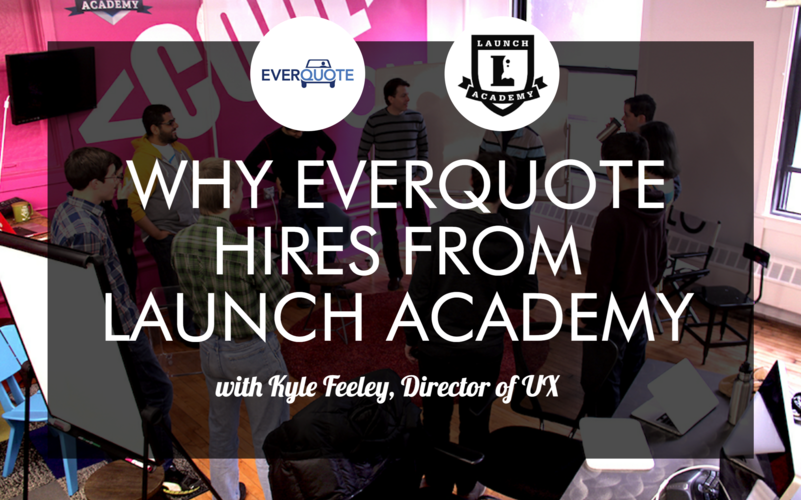 As a self-taught developer himself, Kyle Feeley appreciates coding bootcamp grads who have made an intentional career change. So as the Director of UX for online insurance marketplace EverQuote, he turned to Launch Academy in Boston to hire for his front-end development team. Kyle tells us how bootcampers can stand out to employers, the difference between college grads and Launch Academy alumni at EverQuote, and why it’s imperative that designers know how to code.

Tell us about EverQuote and your role as the Director of UX.

EverQuote operates the largest online insurance marketplace. The company’s data and technology platform unites drivers with agents and carriers to deliver great rates and coverage while maximizing policies sold for insurance providers. EverQuote was founded with the vision of applying a scientific, data-driven approach to help consumers find the best price and coverage for their individual insurance needs while driving down costs for insurance providers. As the Director of UX, I oversee a team of designers and a team of front-end developers who create all the branding, creative assets and user interfaces for the company’s websites and safe-driving mobile app, EverDrive.

How large is the UX team at EverQuote and what are they generally working on?

How many Launch Academy graduates have you hired?

Over the the last few years I have personally hired seven Launch Academy graduates. We currently have four Launchers on our front-end development team. We have quite a few other Launchers on other development teams at the company. Our VP of Engineering and my boss, Ryan Grimard, was invited to Launch Academy’s first hiring event. He loved the program after his first visit and we have been working with them ever since.

What roles specifically have you hired Launch Academy graduates for?

Our company has hired front-end developers and full-stack developers from Launch Academy. We have had a former Launcher as an intern, but only because he was still in school – we hired him full time when he left school. We normally hire directly into developer roles.

Other than Launch Academy, how do you usually hire developers? What are you looking for in a new hire?

We source from schools, bootcamps and anyone who is self-taught. We’ll strongly consider anyone for a role, if they have impressive examples of their work and are a good culture fit for EverQuote. Personally, I am a self-taught developer, so admire other developers from non-traditional backgrounds.

Do you notice differences in hiring from a coding bootcamp versus more traditional channels?

No CS degree program I have encountered offers comprehensive training in front-end development or user experience. The closest degree programs that specialize in UX are usually called “Human Factors Engineering,” but these programs seem to be relatively new, and different schools place different emphasis on how that relates to the web and mobile apps. That being said, coding bootcamps really seem to have been formed in reaction to an expanding job market for web & app development and so are more in-tune with the unique challenges and opportunities of developing for those platforms.

There are a lot of bootcamp grads these days – what stood out about the Launch Academy grads you’ve hired?

Launch Academy has a holistic approach to their training, which I think is a great place to start when you’re getting into development. Being exposed to both the front-end and back-end, and product and business decisions, will help inform you about what direction you want to go in when you get out of Launch. Also, during training, Launch Academy has several check-ins to make sure students are keeping up, so I feel confident that every student leaving the program has the same base-level understanding of development.

What can coding bootcampers do to stand out to potential employers?

While it’s true that you can enter a coding bootcamp without relevant experience in development; the more you prepare ahead of time, the more you’re going to get out of your time at the bootcamp. I think most people, myself included, need to be exposed to a new skill over time for that skill to cement. Also, when you are at a bootcamp: do your best to clear your schedule except for your bootcamp coursework and the work on your final project. You may never get another chance to spend this amount of concentrated time learning and creating.

Did you get resistance from your company about hiring coding bootcampers?

Our management was actually excited to learn about Launch Academy. The management at EverQuote tends to be very forward-thinking and results-oriented – so they see how coding bootcamps embody those values. Our management also knows how difficult it is to hire solid developers. Any trepidation they might have had with regards to hiring from a coding bootcamp must have gone away after the success we had with our first hires.

When you put the Launch Academy grads through a technical interview, how did they do?

Every Launcher is different. Some do better than others. And the ones who do the best, we end up making offers to.

Our application process is no different than the process for traditional applicants. We put every candidate through the same rigorous testing no matter where applicants are coming from. Everyone who works on my team has to meet a certain level of understanding of front-end code (JavaScript/CSS/HTML). On top of that, they have to display a proclivity for visual design and usability.

At Launch Academy, students learn full-stack web development, but you’re hiring them as Front-End Developers – what does the on-boarding process look like?

The onboarding process consists of a lot of pair programming, group programming, code review, and talks from our leads that explain our stack, internal tools, and code architecture.

We do not have a formal mentoring or apprenticeship program in place. We have an established on-boarding process for new hires. Also, our developers work very closely together and are encouraged to pair program whenever they feel that the project warrants it. Our more senior developers are interested and enthusiastic about helping new developers get up to speed. Our code review process is thorough and, hopefully, very informative. Also, our company encourages continued learning by reimbursing employees for training relevant to their work at EverQuote.

Do you think it’s important for UX Designers today to have web development skills?

I won’t hire a designer without coding chops – how a page is built informs how it is designed. When architects design a building, they don’t have to be engineers, but they need to incorporate engineering principles to design effective structures. To me, designing for the web and software is no different. The other reason I would encourage designers to know code is that, at the end of the day, it makes you more marketable. You will qualify for more jobs at a better rate if you have solid JavaScript/CSS/HTML chops.

Since you started hiring from Launch Academy, have your new hires moved up or been promoted?

Yes, definitely. A couple former Launchers on my team have become leads on b2b and consumer projects.

Do you have a feedback loop with the Launch Academy team?

Launch Academy has been very responsive about our input. We have met with them several times to offer our thoughts and answer questions. Their curriculum looks to be constantly evolving as a result of their engagement with employers and students.

Will you hire from Launch Academy in the future? Why or why not?

Yes, absolutely; we have had a lot of good fortune with our employees from Launch. They have brought a ton of value to our teams and our company and I look forward to more Launchers joining the team!

What is your advice to other employers who are thinking about hiring from a coding bootcamp or this bootcamp in particular?

Hiring from a coding bootcamp is not the same as hiring a Computer Science grad and that’s OK. They may have different gaps in knowledge or understanding than a CS grad does – they have had less time to be exposed to some of the core concepts. But bootcamps force students to learn fast and adapt quickly, so if you find someone who’s the right fit, and as long as you give them the right support, they should be able to integrate into your team successfully. Also, the mindset of the most successful bootcamper is maybe different from the average CS grad – more enthusiastic, more curious – because rather than an “I guess I’ll do this” approach many college students take to their majors, the choice to enter a bootcamp is a very intentional one.