Sara Ines Calderon noticed in her startup job that technical skills made employees an "invaluable asset wherever you go," and Sara "wanted to be indispensable." So she drew on her networking connections and met Lilliana and Gregorio, the "mom & pop" founders of Sabio in Los Angeles, California. She is now a student at Sabio and talked to Course Report about Sabio's .NET curriculum, the school's commitment to diversity, and how she's already used her new skills to win hackathons!

Remember, the Course Report community is eligible for a $500 scholarship to Sabio.la!

What were you doing before you started at Sabio?

At the beginning of the year I was working at a startup- a YouTube network and a business built on the YouTube platform. I moved to Austin where I was freelancing, doing different kinds of marketing and digital media consulting.

I was literally about to start applying to marketing jobs when Lilliana and Gregorio -- who I had met previously through networking in tech in LA -- suggested I consider doing Sabio.

Do you have a technical background at all?

I really don’t have a technical background. In the startup scene, you end up adapting to the current needs of the company so at my last position I did start to acquire more technical skills but certainly not enough to be an expert in any one technology. This is a total 180 in that sense.

Had you thought about applying to bootcamps before meeting Gregorio and Liliana?

I really hadn’t, but I think I’ve been evolving towards this step. As I mentioned, at my previous job I really recognized that if you have technical skills then you become this invaluable asset wherever you go, and I wanted to be indispensable. I wanted to have those skills that would give me authority or deference in a workplace.

I’d actually started to learn how to code on Codecademy and I looked for weekend programs when I was in Texas. Unfortunately, the weekend programs seemed to be geared a bit more towards people who already had skills and wanted to augment those skills rather than starting from zero.

Did you do a technical interview with Gregorio and Lilliana or was it more like a culture interview?

The application process in my particular case was a little bit different because I already knew Gregorio and Liliana and we had casual conversations about everything we would have covered in the interview – like where I went to school, what I studied and what my goals were.

As far as the application process, it was pretty fast.

Gregorio is the main instructor; what is his teaching style like?

His approach to teaching is very much like a practicum. In the beginning, he gives you just the right amount of hand-holding.

Now that we’re halfway through the class, I think he’s kind of backing off a little bit and trying to force us to figure stuff out on our own – which is extremely frustrating when you have no idea what you’re doing but at the same time, it is actually helping us learn to figure things out by ourselves. I’m getting much better at debugging my own code because I have no choice.

Gregorio is really great practical instructor because he gives us real world examples from his 15 years of experience. A lot of this new knowledge is very abstract, so he contextualizes it in terms of being a professional developer so it makes a lot more sense. Having worked in a startup, it’s just as close working in a startup as you could get in this particular context.

Does Gregorio do lectures or is it mainly project-based learning?

It’s definitely project-based learning and that’s one thing I really like about Sabio. We just submitted our project which is called Electa. We made a white label app for organizations and candidates in government to engage specifically with Latino voters.

We submitted it to the Voto Latino Innovators Challenge and we’re semi-finalists! If we win, they’re going to give us money to finish building the app. There’s always a conversation at Sabio about ideas. They invite different folks to come and pitch us their app ideas, then we as a cohort discuss it.

What’s your cohort like? Is there diversity in your class?

There are 8 people in my class and nobody has dropped out. I think that the whole course is very well-rounded and contributes to what I would call a “mature learning environment.” I think the youngest person is 23 and then there are three of us that are in our 30’s, a few folks in their 40s and a lady in her 50s. That’s a good age range. There’s a couple of white gentlemen and then a black woman and the rest of us are Latino. I think for me in particular, I think it’s nice to be in tech and not stick out so much.

In talking to Lilliana, it seems like there’s a big emphasis on diversity, specifically with getting Latino/a people into tech. Do you feel that that emphasis at Sabio?

When we were talking about building the app, it was within a context we had a conversation around translating it to Spanish. We also wanted to include voter verification which obviously affects more people of color and more Latinos.

As far as the diversity in Sabio’s mission, it’s not like diversity is built into the curriculum, but I get the impression that it was more on the recruiting side and the admission side.

Are there specific technologies that you’re taught at Sabio?

We’ve had actual conversations about this amongst ourselves. We’re learning .Net, which in the Silicon Valley/startup culture, is not necessarily hot on the tech scene. But the bulk of the programming jobs are still .Net (or Java or something else). I actually went to a Ruby on Rails workshop here in L.A. and it was a lot easier than .Net.

Two months ago, I was making my living putting together newsletters and doing corporate blogs and social media management – which I think is important work and is going to augment my skill set, but it’s exciting to be building that technology.

We’re doing front-end: HTML, CSS, Javascript. We’re also doing SQL and database management and we’re also learning C++ and a few other technologies. We’re working with Bootstrap and working with different sorts of APIs. We’ve had the chance to work with Google Maps API, we might have the chance to work with the Google Civic Information API. Ultimately, those are the kinds of things that I wanted to work on.

The template has already been set up for mobile. A lot of the startups or a lot of the technologies are mobile-centric so just learning about how to manipulate front end stuff so that the mobile iteration is also good.

Will you be working on an individual project as well?

I think at other bootcamps there are individual projects, but Sabio is structured around one group project. Some of us have our own little side projects going on and I personally have a few projects I want to build so I’m hoping to do that. We actually won a hackathon! Sabio had a total of two teams win 2nd and 3rd place. My all-woman, all-Sabio Fellow team won 2nd place! 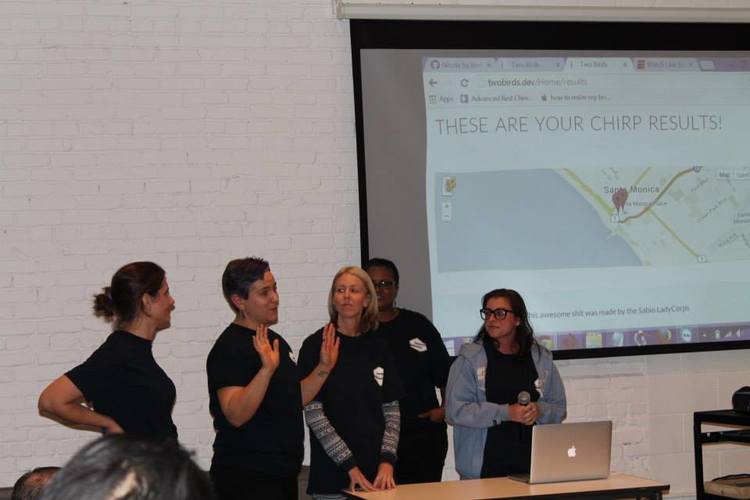 Of course you’re only half-way through Sabio, but have you noticed that there’s an emphasis on job placement at all?

Absolutely. From the start Gregorio focused on soft skills- we have a peer code review, we’re working in a team environment, and we’re doing daily standup meetings. He’s always encouraging us to use the developer vernacular; especially in the first few weeks there’s a lot of emphasis on talking and Googling like a developer. All throughout the program there’s a huge emphasis on soft skills in all those different ways.

As far as job placement, we were lucky enough to see the last cohort, half of them got jobs right out the gate and the other half were still looking for work by the time our cohort started. We were able to see people coming in with multiple job offers and encouragement.

That goes back to the aspect of the Sabio community that I really enjoy. It’s cool to see other people go through it and be like well, if they did it I can do it.

Do you have an idea of the type of company that you want to work at?

To be perfectly honest, right now I’m just concentrating on doing this program. I really want to work at company that’s supportive of women because I’ve worked at tech companies that don’t try to create a comfortable environment. I feel like I should be treated well wherever I work.

Ultimately, I’m excited about living in Texas. My dream job would be to work at some sort of renewable energy company. In Texas the startup scene really is growing- I would love to do something with wind or solar. In the short term, ultimately I want to work in a place that’s supportive and allows me to grow as a developer and technologist. I’m really excited about trying to foment or support more Latinos, Latinas and women getting into tech.

Austin has a She Hacks group so I definitely want to get involved. And I think maybe start volunteering to help people learn to code.

Is there anything you’d like to add about Sabio?

I just want to reiterate that Sabio has been great. This is the ideal learning environment for me in terms of it being interactive and immersive. I’m a former newspaper reporter and that’s how I learned. Another metaphor is in martial arts. I started out in a more structured environment like Karate, but as I got more advanced, I started working on techniques and doing more sparring. Getting hit in the face is a really good way to learn how not to get hit in the face.

That’s my favorite thing about Sabio, to be sitting at a computer and be forced to figure out why things aren’t working and how to make it successful. I think that it’s that attitude and that frame of mind that will make you a better professional.

Want to learn more about Sabio? Check out their School Page on Course Report or their website here!