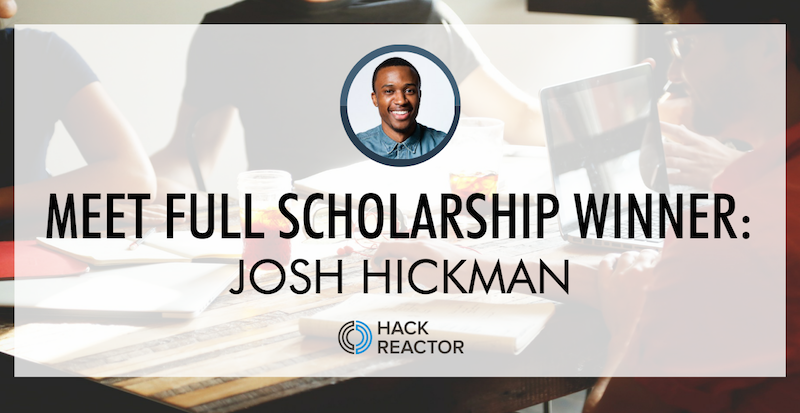 In November 2016, Hack Reactor announced a new $1.3MM Scholarship Fund for aspiring software engineers, and recently chose their first winners! So what does it take to win a full-ride to Hack Reactor? Meet one of these lucky winners: Josh Hickman. Josh’s entrepreneurial spirit and background in audio engineering made him a natural choice for the Hack Reactor Scholarship. He started teaching himself JavaScript about one year ago, but decided that he needed the “intangibles” that Hack Reactor coding bootcamp could provide. We sat down with Josh to talk about why he chose Hack Reactor, the scholarship application process, and his future career plans.

What were you up to before you applied for the Hack Reactor Scholarship?

I'm originally from Portland, Oregon, and after graduating with a BS in finance from Portland State, I ran a small, boutique recording studio downtown, renovated from a former yoga studio. During those two years I learned a lot about entrepreneurship and business, but I wound it down when I decided to move to LA for an internship at a larger recording studio. While at that internship, I was able to gain a valuable perspective on the music industry. It was at this time that I felt I could have a better chance of achieving my goals in music by learning to create the technology behind it. As my first step, I decided I wanted to become a web developer, so I started teaching myself HTML, CSS, and full stack JavaScript.

Did you find that music and audio engineering was similar to programming?

Sure, especially at the highest levels. I definitely see similarities in the mindset and creativity needed. When mixing a song or producing a track, there can be a lot of tinkering around and trying new things; in a sense there isn't an exact way to make a song perfect, because it's art. I think oftentimes it can be the same with programming, especially in a language as dynamic as JavaScript. As I learned to code, I’ve started to actively encourage other people with similar interests to think about translating their skill set into software engineering. At the end of the day, I’ve found that I just really love to create things, which is what got me into music in the first place. I get similar feelings when I’m programming– it’s challenging, creative, and rewarding.

Why did you decide that a coding bootcamp was your best option to learn programming? Did you consider getting another college degree?

I've been self-teaching for about a year, so this is something I thought about for a while. I briefly considered another degree, but I knew it would take too long. Plus, I felt jaded toward the university experience after getting my BS. To me, the risk to reward ratio of a coding bootcamp made sense – being pushed extremely hard while learning to code for 3 months and then getting the results that Hack Reactor publishes felt like a great deal. Originally, I thought I could work in a finance-related role at a tech company and horizontally pivot into a technical role, but I found I was getting burnt out coming home and learning for five to six hours, all while handling a day-job. I’m hoping my experience at Hack Reactor will fill in any knowledge gaps that I may have as I make a final push to get into an engineering role. Additionally, I realized that I needed the intangibles that a bootcamp could provide – the immersive structure, and the network of instructors and other passionate students who share the same objective as I do.

Did you research other coding bootcamps? What stood out about Hack Reactor?

I looked at General Assembly and CodeSmith. But I had a friend go through Hack Reactor who said good things about it and I watched him get placed at a company after he graduated, so I picked his brain. Plus, some of the prominent people that I follow on Twitter had been through the same track at Hack Reactor. After doing my research, I really felt that Hack Reactor was one of the top coding bootcamps for me, and if I was going to devote so much time and energy to this, I wanted to be around the best students and teachers.

Hack Reactor is not for beginners, how did you teach yourself enough JavaScript to ace the technical interview?

In the beginning, I started with a few Udacity MOOCs, but as time progressed, I built a hybrid system that worked for me. I used pretty much anything if it was good. One thing I felt was helpful were written tutorials by developers on Medium. I followed knowledgeable engineers on Twitter. I found amazing resources on YouTube and would listen to the free classes provided by MIT on OpenCourseWare. Everyone learns differently, so I was just trying to be like Neo from The Matrix and “plug-in” to the tech community in a lot of different ways.

My local community was also extremely important. I went to several NodeSchool meetups and met people there who I'm still in touch with. Not to mention, meeting people at meetups helps you gauge your own competency, understand what level you’re on, and find areas where you can improve.

Did that self-teaching get you through your technical interview at Hack Reactor?

For the Hack Reactor scholarship, applicants have to make a two-minute video! What was yours about?

The point of that video is to teach something in a two-minute video. At first, I was going to teach my viewers something generic, like how to cook a recipe, but I felt that it wouldn’t fully tell my story. So instead, I gave a high-level overview on how to sample music. I spent two minutes explaining and demonstrating how to sample Crave You by Flight Facilities. I couldn’t go into as much detail as I would have liked, but I was able to briefly explain how sampled music is created. I tried to make my video educational, intriguing, and most importantly something that told my story.

When do you start your cohort?

I will be starting January 31st at the LA campus.

How have you started preparing for Hack Reactor?

We got our pre-course work a few weeks ago. Last Friday was my last day at my job, so this week I’m starting to dive in head first. The pre-course material touches on Git workflow, automated testing, JavaScript syntax, and gives you a refresher on CS fundamentals – all the knowledge they'll expect us to have on the first day of classes. I'll keep teaching myself eight to 10 hours per day and I'll touch up on the areas that I need to work on.

I’ve also been letting my friends and family know that I’m starting Hack Reactor and it’s going to be taking a lot of my time for the next few months. But they’ve all been watching my journey and know how passionate I am about this, so I think they’ll understand when I go off the grid.

Do you have specific career goals after you graduate? Do you want to stay involved in music?

I’d like to work for a startup where I can get my hands dirty. I’m open to working for any company with a product that I’m passionate about. For example, Splice is a start-up based in Santa Monica, and they provide workflow tools for musicians and producers. I love the founder’s vision and what he does for the community. Stem is another startup that’s working on paying artists and producers their streaming music royalties using the blockchain; that looks interesting.

I’m passionate about music, but I have other interests as well! I went to school for finance, so ideally I’ll find a job that’s in my realm of interests or is a combination of the two.

Any advice for future bootcamp applicants?

Don't get discouraged! I can easily think of the many sleepless nights I had being frustrated as I dealt with all the new information. I knew where I wanted to be in my career, but it felt so daunting – I guess that’s what they call Imposter Syndrome – and I couldn't see the path to get to where I wanted to be. Tap into all of your resources; Twitter is the reason I found out about the Hack Reactor scholarship! Albrey Brown retweeted an announcement about the scholarship, and that's the reason I applied. Attend meetups and meet people; I’ve found the programming community to be extremely beginner friendly. It’s amazing how many resources are available at the click of a button or just by asking.

Also remember that learning is a lifelong process. I still have and will continue to have days where I get stuck, but as long as I'm getting better and progressing, I can feel content that I’m growing as a person and as a developer.