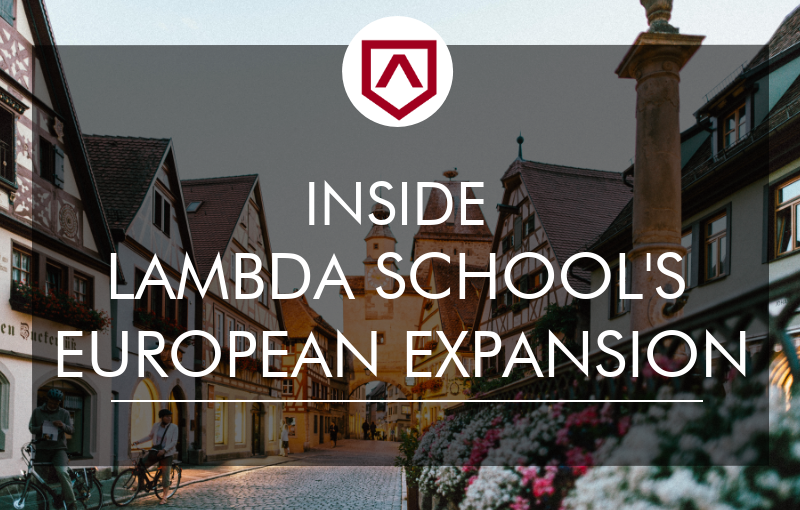 Lambda School has taken its curriculum (and popular Income Sharing Agreement) abroad! We sat down with Tommy Collison from Lambda to learn the motivations behind the school’s international expansion, how the ISA terms will shift for European students, and exactly what’s changing as Lambda School imports its curriculum to the EU and UK.

Tommy, what is your role in Lambda School’s European expansion?

I started off as a part-time student at Lambda School. I’m now the on the growth team, and my role is to help the school expand overseas as seamlessly as possible.

I live in San Francisco, but I spent the first 19 years of my life in Ireland before attending college in the States. This gave me perspective on the differences between the American and European college experience. When I heard about Lambda School’s overseas expansion goals, I wanted to help, and I’ve been working on the school’s expansion ever since.

What was Lambda School’s motivation for expanding to the EU and the UK?

It really comes back to Lambda School’s central philosophy, that talent is equally distributed, but opportunity isn’t. Our goal is to reduce barriers to a great technical education. We believe that by bringing people of all different backgrounds together, we can take students from day one of class to Day One of a great new job. We’re committed not only to teaching our students the technical skills they require, but also to helping them find jobs that will change their lives.

In expanding overseas, what will change about Lambda School?

One big change is in the terms of our income sharing agreement, based on the way the European tax model works.

Secondly, Lambda School lives or dies by the strength of our hiring network and hiring partners. We have amazing team members working on developing a strong hiring network, connecting our graduates with companies that want to hire developers. We'll continue to work on building this out in Europe, figuring out how best to connect the graduates from our European program with companies based here.

Finally, the time difference was a challenge (in the US, Lambda School operates from 8am-5pm PST, which is 5pm-2am in Europe). Asking students to attend class at those hours was obviously not going to work. We’ve hired a new instructor who teaches on local time. We also had a lot of conversations about which language to teach the classes in, since so many different languages are spoken in Europe. Eventually, we decided to teach in English.

Which countries/cities will Lambda School be expanding to?

When Lambda School launched in the US, it was very important to us to be available all across the US. Two people can be equally talented and equally hard-working, but if one of them lives in a tech-friendly city like New York, Seattle, or San Francisco, they have a huge competitive advantage.

So, when we launched in Europe, we similarly wanted to launch in as many places as possible. Our first European class started January 7, and included students from six or seven different countries. These students were from all over Europe, not necessarily just people concentrated in the big European tech hubs. Again, from the outset, our intention was to offer opportunities to as broad and as diverse a group as possible.

Which companies are already in the Lambda School hiring network in Europe?

Fundamentally, they’re the same kind of companies we’re talking to in America. There are so many American companies that need to hire a certain number of developers by 2020. These roles will also be in high demand in Europe. The skills that Lambda School students learn — from web development to front-end and back-end development — are skills that every company needs. In the London, Berlin, Stockholm, and Dublin startup communities, there’s going to be a huge demand for developers with the networking and computer architecture skills that Lambda School graduates come away with.

Will you be tailoring the curriculum to cater to different market needs in Europe?

At least initially, our students have been following the same curriculum we designed for the U.S. But we’ve also done our due diligence, working with European hiring partners and recruiters to learn more about what their specific needs are, and what it is they’re looking for. We’ve built the curriculum backwards from there.

For example, Lambda School’s European cohort will learn web foundations, front-end, and back-end development. They’ll learn data structures and algorithms, and computer science side of things, such as networking and computer architecture. They'll also work on what we refer to as our “build weeks,” and lab projects – essentially building production-ready, stand-alone applications that they can later include in their portfolio to show future employers.

It’s possible that in the future, there may be a specific skill or programming language which European companies are seeking. If that happens, we’ll rook at tailoring our curriculum to ensure that our students are learning the skills necessary to give them the best possible job prospects.

How will the ISA (Income Sharing Agreement) be structured differently in the EU/UK?

As in the US, Lambda School in the EU, will have no upfront tuition. Ultimately, we thought it made more sense to take a smaller percentage of a graduate’s salary for a slightly longer period. Instead of tuition payment, we charge our graduates 10% of their salary for four years, capped at 27,500 Euros or 25,000 English pounds. We do this because we want people of all backgrounds to find their way into the tech industry.

We recently announced another change at Lambda School – we’re moving “graduation” from our lexicon. Graduating from Lambda School doesn’t mean anything until you get a job. We’ve now moved the job search portion of our school into the pre-graduation curriculum. We no longer consider a student “graduated” until they’ve gotten a job.

What does that change mean in terms of a graduate’s timeline to start paying tuition back?

The ISA is identical – students get more Lambda School for the same price. Our students don’t start making repayments until they get a job. It’s much more important for us to shift our focus towards graduates mastering their technical education, and finding jobs they love.

The ISA seems extremely popular in the US right now (perhaps due to the cost of education and debt in the US). But is the demand there in Europe?

I think so. Fundamentally, ISA’s represent an agreement between a student and the school. We want our students to do well; when they do well, Lambda School does well too. That’s why we invest so much in students and their education, in a way that most traditional European universities can’t or don’t. The student debt crisis in the US is on another level entirely – that kind of thing just doesn’t exist in Europe. But we think the ISA has a place in the European market.

Salaries for developers, on average, are lower in the EU/U.K. than they are in the U.S. Do you think it’ll take longer for your European students to pay back tuition?

I think our ISA repayment model, which involves having a smaller percentage of a European graduate’s salary taken out over a longer time period than our US students — over four years instead of two — will make a big difference. We’re confident that investing in talent is good for students, and good for the school.

There’s skepticism around ISAs due to the fact that they’re largely unregulated. What measures do you have in place to stay transparent and accountable?

There’s nothing I’d love to see more than high-level regulation of ISAs. It’s also important to understand how powerful ISAs can be in terms of opening up opportunities for people, and helping them get better jobs.

We’re upfront about the terms of the ISA on our website. There are no asterisks. We’ve taken great lengths to ensure that our ISA’s are devoid of surprises or hidden terms. Every decision we’ve made regarding ISA’s has always been with the student’s best interest in mind.

There are already a handful of coding bootcamps in the EU. What will set the Lambda School apart?

For starters, Lambda School is a hybrid between a coding bootcamp and a traditional Computer Science (CS) degree. The length of the program is 30 weeks, full time, nine-to-five Monday through Friday, which is a lot longer than traditional coding bootcamps. That’s about 75% of the length of time it would take to attain a CS degree. That extra time allows students to dive deep, and for the material to become ingrained.

Additionally, Lambda School is hyper-focused on mastery. Our courses are designed each week to be their own self-contained module. Students learn the material Monday through Thursday, and then on Friday they have a “sprint challenge assessment,” where they have to demonstrate their mastery of the material. Our students don’t continue until they’ve successfully demonstrated that mastery.

Lambda School isn’t just making an investment in students during week one, week two or week 30. We’re ensuring that our students understand the material inside-and-out, up, down, backwards, and sideways. That’s the Lambda School commitment: it’s not about getting students through school, it’s about giving them the skills they need to succeed in the workplace.

Yes. We launched January 7, and we've got full time classes starting in the next few months.

Find out more about Lambda School. You can also read more reviews here on Course Report.