Siena Aguayo was a project manager at a tech company when she decided it was time to pursue programming- she chose Hackbright Academy because of the supportive community. We chat with Siena about why she chose a Python-focused school, how she prepared for interviews, and how Hackbright's women-only policy is helping change the face of the tech world.

What were you doing before you attended bootcamp?

I was a project manager at a tech company in Sunnydale, so spent most of my time talking to clients and configuring the software to their specifications, but also some front-end development.  I always did a lot of stuff with computers growing up, and I took some Computer Science in college.

Which bootcamps did you apply to?  Why did you ultimately choose Hackbright?

I also applied to Dev Bootcamp.  I ultimately chose Hackbright because of the community- it became really apparent after poking around on social media, that Hackbright has an incredibly strong community and that would be a huge asset to me as I launched my career.

Did the fact that Hackbright teaches Python affect your decision?

At the time, I asked all of my engineering friends, and people were pretty neutral.  But now that I understand it more, I’m really happy that I went somewhere Python-focused and more focused on CS fundamentals than just learning Rails as a web framework.  Now, it’s going to be easy for me to pick up Ruby and Rails, whereas it might be less easy to go the other way. I think it’s probably likely that where I end up will be a Rails shop, but I’m glad that I learned Python first.

There were two rounds of interviews.  One was more of a culture fit, and the other was trying to gauge your technical aptitude.  There were brain teasers- they don’t put you on the spot, but they’re looking to see how well your learning style mixes with their teaching style.

Ok, so you’re accepted to Hackbright- what was the pre-work like?

What kind of students were in your cohort?  Did you find diversity of the group?

In terms of level, we pretty much evened out. We all had different levels of experience coming in; for example, I had done a lot of JavaScript at my old job.

Hackbright has an apprentice program, so if you are a software engineer but you want to do a bootcamp, they’ll accept people with a higher level of skill. You’re learning side by side with those people. For the first half of the program, you’re pair programming- so sometimes those apprentices would want to work by themselves

How large was your cohort?

28 people. There were 5 instructors- Christian Fernandez was our lead instructor. Any bigger and it may have been a problem, but it didn’t feel that big.

Did any students find that the program wasn't for them and choose not to finish?

We actually had the opposite. We took on a woman who had decided that GA wasn’t for her. Everyone finished. Hackbright tries really hard to not let people fall behind.

The first half of the program, there is a morning lecture, then we would break off into pairs and work on an assignment. Then after lunch, we might have another lecture, and more pair programming. There is a pretty solid structure.

Did you (and your cohort) complete a capstone project at the end of the program?  What did you choose?

The whole second half of the program is doing your own personal project. I built an OCR engine from scratch for Japanese. I haven’t deployed it yet- my database got too big to deploy to free hosting options.

Describe your experience after Hackbright- how did Hackbright prepare you to get a job?

At the end of Hackbright, during the last week, there’s a career day. It’s kind of like speed dating - you talk to each company for 7 minutes. You show them your project and try to talk about what opportunities are available at their company. Then you schedule interviews. I can’t even count how many companies I’ve interviewed with- it’s been a lot. And this past week, I got my first two job offers. (Update: Siena took a job as a developer with Indiegogo! Congrats!).

Did you feel fully prepared to interview?

Yes, I felt really well prepared. Hackbright has an end date but it doesn’t really end. Our last day was in December, but I came in almost every day after it ended. We’ve been practicing interview questions and commiserating through the job search process.

A lot of bootcamps offer a partial refund if you end up accepting a job with one of their partner companies- was that part of your experience?

For my class, if you accept a job with their partner companies, you get $3000 back on your tuition. This is something that has been fluctuating.

What are you up to today?  Are you working on any side projects?

Right now, I’m pretty focused on getting a job. I started to learn Ruby on the side.

What has been your experience as a woman in the tech industry.  Do you feel it changing?

I definitely do. I’ve heard some comments about surrounding yourself with only fellow women being detrimental since it doesn’t mimic the real world. I feel that completely misses the point of all-female engineering schools in the first place. I feel like we’re really changing things- people are talking about the problem of women in tech a lot more. And that opens the door to talking about racial diversity and income disparity as well. I don’t think it’s a lost cause. Hackbright graduated more female engineers than both Stanford and Berkeley combined this last year.

Aside from knowing that you’re good at CS, people who are comfortable in a really collaborative setting will be successful. You can be competitive, but you can’t let that get in the way of helping your classmates. Pair Programming is a huge part of the program, so you probably won’t be successful if that sounds horrible to you. 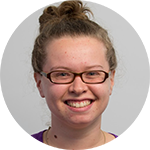 Does Hackbright Academy sound like the school for you? Find out more on their school page or at Hackbright's website!