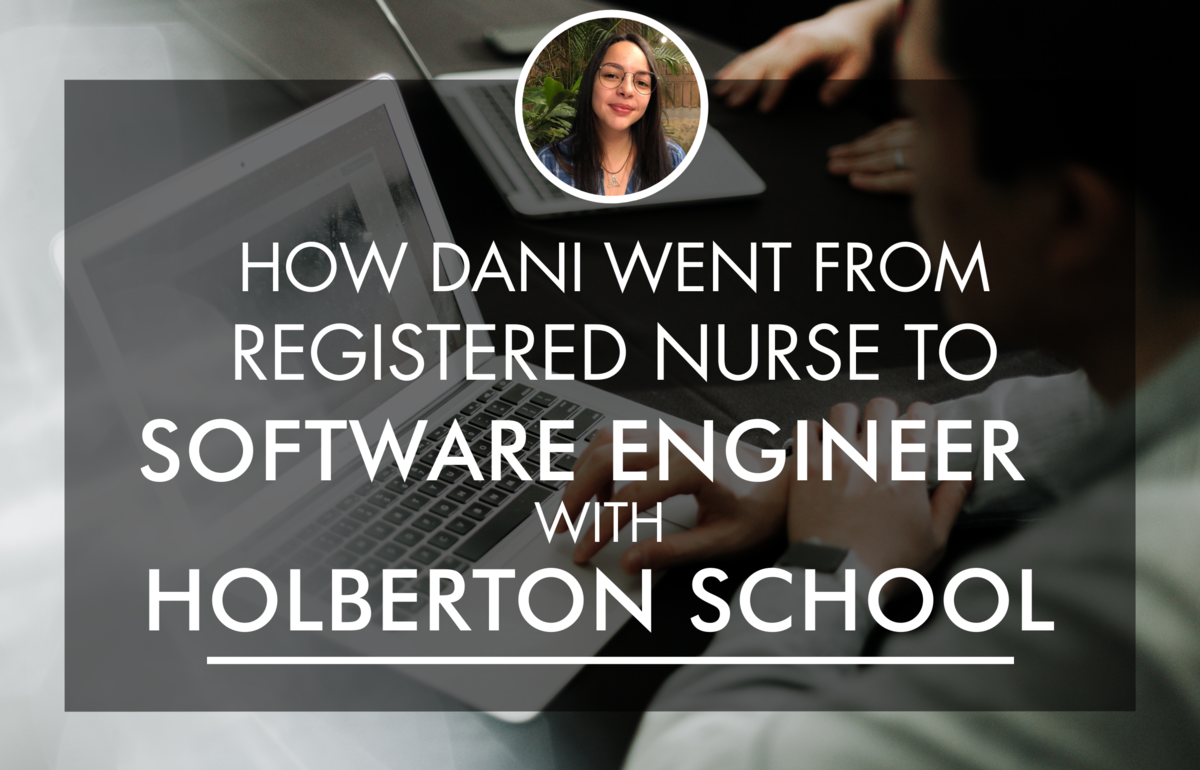 When her career as a hospital nurse became too emotionally taxing, Dani Gómez made up her mind to transition into tech with Holberton School. After completing the 9-month Foundations course at Holberton School’s Medellín campus in Colombia, Dani got the chance to land her dream job as an Associate Software Engineer with HUGE. Dani shares how Holberton School gave her the mindset and confidence to pursue a tech career, plus learn how Dani gives back to the burgeoning tech community in Medellín.

What inspired you to get into tech, Dani?

At university, I studied Philosophy before switching my studies to Nursing. I worked as a nurse for four years and was the head of an ICU unit. I was working 60-hours a week, and it was very stressful emotionally. Some of my encounters with patients left me with PTSD symptoms and I realized that I needed a change. My best friend is a software engineer, and I decided that I wanted that kind of career for myself. When I started to teach myself basic HTML and Javascript, I found I had a knack for it.

Medellín, Colombia is a small city, but the Colombian government has big plans to make Medellín the Silicon Valley of Latin America. Amazon and HUGE, a design and digital marketing agency, have offices here now, and there are many startups popping up. There are a lot of good engineers in the city, and companies know that it’s cheaper to pay salaries in pesos than dollars. Colombia traded cocaine for code – technology is our future in Medellín!

Why did you choose Holberton School to become a software engineer?

At first, I thought I could only become a software engineer by having a college degree, so I enrolled in the Computer Science program at the University of Antioquia, Medellín. When the university went on strike for 9 months, I couldn't properly start my classes. A friend who works for a tech company in Medellín told me about Holberton School’s new Medellín campus. The university’s Computer Science program was difficult to get into, so it was a hard decision to throw that away and start at a coding bootcamp. I used Course Report to research Holberton School, and I even contacted students who were attending the school to hear their experiences. All the information and reviews I found for Holberton School were positive, so I started the admission process.

What was the application process like at Holberton School? Was it hard to get in?

It took me about 30 hours to finish the Holberton School application. The coding challenges were unlike anything I ever experienced before – they outlined what I needed to do and the resources to figure it out. My university Computer Science curriculum focused on algebra and concepts, so I didn’t have a strong concept of basic programming.

As for prework, it was optional. Holberton School sent me books about C programming and Linux, but it was hard for me to understand.

How did you pay for your tuition?

I signed up for Holberton School’s Income Share Agreement (ISA). I then used my savings to pay for my expenses through all 9 months of schooling.

Holberton School is based in San Francisco, but you attended the Medellín campus – was the class taught in English or Spanish?

What was a typical day like at Holberton School in Medellín?

Holberton School is project-based, and they share links with you so you can review the concepts of programming you will need to complete the project. I started my day at 8am and would use the whole morning to absorb information needed for that day’s project. I would also do any quizzes for that day before lunch. After lunch, I would use the rest of the day to code. Every week, we would have three days of projects and two days dedicated to learning. On those learning days, we would discuss topics, ask questions, and brainstorm solutions.

What were your group projects like? What did you build for your final project during Foundations?

During the final trimester, I completed a portfolio project with two peers. We built a web application called Spazi, which is like an Airbnb for pets. Javascript is very popular in our city so we chose this project to help us to obtain a job after graduation. We used a traditional MERN stack with a Mongo database, and Express for the backend. The app was running on AWS and React. The most amazing thing about this project is that we didn't learn all of these languages at Holberton School! Holberton gives you the skills to learn new ones quickly instead of teaching you many specific frameworks. We took one week to learn the technology before beginning the project, and after graduation, my teammate and I both found jobs.

You just finished the Foundations program of the Holberton School curriculum. Do you know what you would like to choose for your Pathway?

I would really like to do Machine Learning, but I worry that I don’t have a strong enough math foundation to do it. My peers who are currently in the Machine Learning specialization at Holberton School have told me how hard it is.

How did Holberton prepare you for the job hunt?

Holberton School prepares you for the job hunt much better than a university. Most importantly, Holberton School teaches you how to learn quickly, and that gave me the ability to pick up on new technologies without trouble when I started working. At Holberton School, we did whiteboarding for everything. I got accustomed to standing in front of a whiteboard and drawing out the problem to solve it, and that is an important skill for a tech interview. In every interview, I had to explain my code. Holberton School also led online mock interviews, and asked us questions that we would be given on a typical tech interview. They helped me improve my LinkedIn profile, my resume, and build my elevator pitch. The funny thing is, I actually received a job offer before I even started the career track portion of the curriculum! I landed a job in January as a Software Engineer when Holberton School's partner recruited on our campus. I finished Holberton in April, and then the COVID-19 pandemic occurred, so my job was put on hold.

After you graduated from bootcamp, how did you get your Software Engineering job at HUGE?

Ever since I wanted to change careers into tech, I have dreamed of working for HUGE. Their office in Medellín is beautiful, and they care about their employees and offer a lot of great benefits. I also love that we have a 36-hour work week at HUGE. Normally, in Colombia the average workweek is 48 hours, so that is a big change.

A really good friend of mine works for HUGE, and he asked me to send my resume in. I didn't think I was going to make it because I felt that I needed more experience for the position. The code challenge that HUGE sent me for the technical interview was so easy compared to the challenges I did while studying at Holberton School. HUGE hired me as an Associate Software Engineer.

Because of COVID-19, I’m working remotely until November. By the end of the year hopefully we will be able to work at the office again. Since I started this job during the pandemic, I have had to onboard remotely. HUGE is now using Google Classrooms for their onboarding process, and I was paired up with a Senior Engineer to help me. The onboarding process consists of challenges I have to solve within a week. They are dummy projects which are based on the Senior Engineer’s current projects. These projects are actually similar to the ones Holberton School gave me. HUGE also has a Career Manager who is there to help me to grow. The Career Manager checks on me to make sure I'm doing okay.

Since you attended Holberton School in person, did you feel ready to work remotely right after graduation?

Yes! My final project for Holberton School was actually developed remotely. My team and I used tools such as Slack, GitHub, and GitHub boards to make the workflow easier, so I felt ready to work remotely after graduation. I also follow Holberton School’s framework to help me in my new job at HUGE when I’m solving bottlenecks or dealing with doubts. If something isn’t working, I first “think why” and then google it! After that, I check in with my peers at HUGE.

I start my day at 8am. In the morning, I check my email, research for my project, and attend the daily development meeting. I use the afternoon to work on the project for the week. Right now, I’m mostly working in the front end building online marketing ads. I'm using HTML, CSS, and Vanilla Javascript. It’s my first job in the tech industry, and I have a lot to learn. HUGE makes me feel it is okay to reach out to the other engineers when I need help.

Tell us about your volunteer work at Coderise! Why is it important to you to mentor the new generation of tech?

I started volunteering at Coderise this Spring, and I am a mentor for girls who want to learn how to code. Working in tech is a whole new world with new horizons. I had the chance to change my career, and I want these girls to have that opportunity too.

The Coderise program lasts three to four weeks where they learn how to build a web page. We start by teaching them basic HTML and CSS. Then we focus on Javascript, programming logic, and how to make an interactive website. By the end of the program, they have created an amazing website from scratch. Volunteering at Coderise has improved my work for HUGE. Teaching HTML, CSS, and Javascript has allowed me to refresh my memory. I also take the time to learn new things in order to teach the girls properly.

How has your former career as a nurse helped you now as a software engineer?

My background as a nurse helps me everyday in my new tech job! Since I was once the manager of an Intensive Care Unit at a hospital, I'm really organized and know how to plan. I want everything to run smoothly. Those management skills and communication skills come in handy now as a software engineer.

What was your biggest roadblock in becoming a software engineer?

The learning curve is really steep. Building my understanding of programmer logic was the hardest hurdle for me. Once I made it through the first three months of Holberton School, learning became so much easier.

What is your advice for someone who is looking to change their career with Holberton School?

Going to a bootcamp is a sound decision for someone who has already formed a career. I don’t know if it would work as well for a teenager who doesn't have work experience. Coding bootcamps are short, intensive, and designed for people who have established self-discipline and a certain level of maturity. Holberton School gives people the logic and foundations needed to become a Software Engineer.