Ezzia’s Journey with the SHE Tuition Discount at General Assembly 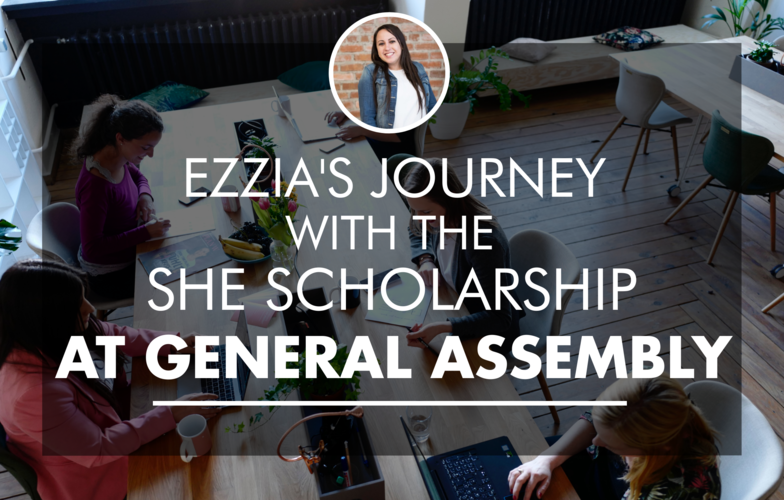 Can you make it through a bootcamp even if you have no experience coding? We debrief with Ezzia, a General Assembly bootcamp graduate and awardee of the See Her Excel (SHE) Tuition Discount, just one week post-graduation. Ezzia had no idea what coding was before enrolling at General Assembly – see what she shared with us about her experience learning Python, Django, and React at General Assembly’s three-month long Software Engineering Immersive.

What inspired you to enroll in a coding bootcamp and change your career?

I got my bachelor’s degree in psychology from San Francisco State. It took about a year working in that field for me to realize that it was not what I wanted to be doing for the rest of my life. After that, I did a lot of temp work, trying to find something that I would really enjoy doing. At the time, I was working as a campus supervisor at a high school.

I was actually curious about the work that my cousin did – she’s a Back-End Developer for Google now, and previously worked at Linkedin. I had no idea what coding was, and so she explained it to me. I did some more research and came across General Assembly. I applied and they sent over some pre-course work. I found myself really enjoying that prework.

Did you research other coding bootcamps or did you have your heart set on General Assembly?

Aside from General Assembly, my cousin also mentioned Year Up. I looked into GA first and immediately liked what I saw. Year Up catered to people without a bachelor’s degree (which I have). I met with Kelly Killoran, my GA Admissions Producer, who gave me a tour of their campus. I really liked its vibe, so I stuck with it, and didn’t feel the need to consider any other coding bootcamps. Plus, I got the SHE tuition discount from General Assembly.

Can you tell us about the SHE program/tuition discount? What is it and how did you apply?

I discovered the See Her Excel (SHE) tuition discount online. In addition to self-identifying as a woman, in order to be considered, your yearly income cannot be higher than $40,000. I also had to pass the admissions test in order to qualify. I was given $1,500 off the cost of their Software Engineering Immersive course, which made a big difference.

In addition to that See Her Excel Tuition Discount, I took advantage of the Catalyst program at General Assembly, which is an income share agreement. If I’m remembering correctly, students don’t have to pay tuition until three months after you graduate, and repayment begins only once you secure a role earning at least $40,000 per year.

Do you have any tips for people about passing the admissions test or the interview to get into General Assembly?

Honestly, even without very many hard technical skills, hard work and determination will go a long way. Even at a high-level, I had a very weak grasp of what coding was, but I kept studying the course materials again and again until I understood. I watched YouTube videos; I read articles; I did whatever I needed to understand. I really had no idea what I was doing. I even failed the test the first time around! But I let that failure motivate me to keep practicing, so that I would pass the next time.

What was the teaching style like? Was it compatible with your learning style?

The first few weeks of the bootcamp consisted of a lot of lectures and code-alongs to allow students to firmly lay down the foundations. After that, we dove into completing projects. For example, in the very first individual project we had to build a game using HTML, CSS, and Javascript. After we were done with the game, we learned Express (Node.js), which we used for our first back end project. With each subsequent language we learned (Python, Django and React), we completed a project. Projects were helpful in that they provided regular opportunities for hands-on, practical experience. All of the projects were group projects except for the game and the capstone final project. For the capstone, you get to pick anything you want to build, and to use any language(s) you want to use. You then present your completed project on the final day of the course. It was awesome.

What did you build for your capstone? And what technologies did you use to build it?

I did something quite silly, actually! My bag is always filled with paper receipts; I have tons of them. It’s the same for my email inbox. So, I decided to build a website to upload all of my receipts. Once a user creates an account, you can select a retail store – let’s say Target, for example – and upload your paper receipt or e-receipt. If you wanted to return something to the store or needed proof of purchase to make a warranty claim, the receipts would be right there. To build it, I used the MERN stack (Express, React and Node.js). It’s a great way to declutter bags and inboxes, while staying organized.

They were all amazing. In fact, all instructors were bootcamp graduates themselves (even if they had worked in tech after graduating) – which was great. It meant that they knew exactly what we were going through as bootcampers; they understood the pressure and knew that the course could be hard at times.

What was your biggest challenge at General Assembly?

The biggest challenge was that the course only spans three months. You learn so many things, so there are times where it’s hard to remember everything. Before the capstone, for instance, the last project required React and Node.js. Another project required use of Django and Python. Once you’ve only just grasped Python, you have to quickly move on. At the same time, this quick turnaround was good for efficiency, and previous course materials are always available to refer to. Another major challenge is that we only had a week to finish projects. That was quite stressful.

Was your cohort at General Assembly diverse?

There was a total of 25 students, with seven women including myself – all coming from totally different backgrounds. Some had a sales background; others were personal trainers, for example. Our cohort bonded well: we stayed after class; we exchanged phone numbers, and spoke all the time. It was good because it meant that I felt that there was always somebody to lean on. I think that building a rapport with your peers is really helpful.

It has been one week since you graduated. What have you been up to since then?

With it being the holiday season, I know that there’s a lull in recruitment through the end of the year, so I’ve been taking time to review all that I have learned in the past three months. I’m even thinking of starting my own project. I’ve also been looking at interview questions online to prepare myself for once I start applying for positions in the new year.

I’ve been looking at jobs to get an idea of what’s out there. For the time being, I see myself primarily searching for front end jobs. But I do really like Node.js, and I’ve seen that it’s very popular, so I’m also open to back end positions that leverage Node.js.

Does the General Assembly team help with your job search?

We have a career coach, which has been super helpful. This week, we had two workshops with our career coach, for which GA alumni and guest speakers came in to speak with us. We’ve had salary negotiation, resume building, and technical interview practice workshops. GA also has partnerships to help students find jobs.

What has your impression of the tech job market been in San Francisco so far?

It’s crazy! There are so many jobs online. Naturally, there’s a lot of competition and jobs that require a minimum of a year’s experience or other pre-requisites. But there are also a lot of jobs that are seeking out people who’ve attended bootcamps. As a matter of fact, one of the guest speakers at a GA workshop is a manager at a tech company. He told us that in his experience, bootcamp graduates are considerably more advanced than people who attended school for computer science degrees. That was very reassuring to hear. I think bootcamp graduates are becoming more and more sought after by companies.

What advice would you give a friend who is considering attending a bootcamp?

Just do it – it’s totally worth it. Even if at the outset you aren’t 100% sure that you want to pursue working in the field in the future, you learn so much that I’m pretty sure that after taking the course, you’ll want to pursue it. It’s so immediately gratifying. When you build something, you see your work instantly; you don’t have to wait. I’m unsure that anyone is born talented in this field. Just remember that while you may admire the work of others, they too were beginners at one point. Sometimes it will get hard, but don’t get discouraged – working hard will definitely pay off.