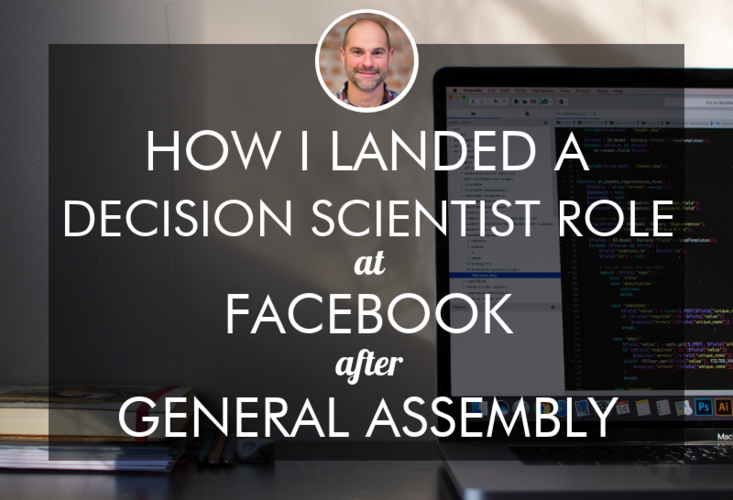 Dwayne Jarrell had been working in marketing analytics for the majority of his career (20+ years!), but he wanted to transition into the exciting world of machine learning. He chose to quit his director-level analytics job and took time off to enroll in General Assembly’s Data Science Immersive. Dwayne tells us how he made the most of a bootcamp even though he already had a strong technical background, and why Facebook recruited him to become a Decision Scientist after General Assembly!

What were you up to before you decided to attend General Assembly?

After a couple of decades in that career, I realized I wasn't learning anything new from an analytics perspective. I had moved up to Director level and was managing teams, overseeing analytics. When I thought about finding a new and interesting role, the old tools didn't really cut it anymore – big firms are using SAS but everyone else is using R and Python. I wanted to update my skill set and do machine learning, but there was no way for me to do that while working 60+ hours a week in a full-time job. I love analytics – answering new business questions and solving problems – so I decided my best option was to take some time off and enroll in a bootcamp. I did some research and found General Assembly.

What made you choose a data science bootcamp like General Assembly, versus taking a college course or teaching yourself online?

I knew bootcamps existed and I wanted to do something relatively quick and intensive, not a one or two year program. I am a fast learner, so I knew I'd be able to pick up information quickly in an immersive program. I considered a few different bootcamps; I talked to people at Berkeley Bootcamps and General Assembly, and a few others. I was looking for convenience and if they had classes available at the time that I wanted.

Did you set a specific career goal before you started General Assembly?

My goal was definitely more of a career pivot. I had risen high enough in my last organization, so my goal wasn’t necessarily to get a promotion. I wanted to work with more interesting, modern methods in digital and machine learning. My dream, stretch goal was to live in San Francisco and work in tech – and working at big banks wasn’t going to get me there. I knew I’d have a good story if I could combine decades of experience with answering business problems and being able to apply modern analytics. And getting a job at Facebook ended up being the perfect answer to that!

Since you were experienced in data analytics, was the GA application and interview process easy for you?

The actual task and mini-analysis seemed very straightforward to me – it was something I'd done a million times. We had to gather data, create a deck, and present to team. For me it was simple, and something I had learned in my everyday job for the last 20 years. But it was a great exercise to practice my skills, and it made sense to me how General Assembly was assessing my critical thinking skills.

If I'm being completely honest, I would love if General Assembly had a course geared more towards people who already had a strong technical background. The first three weeks definitely started out slow and too basic for me, but ramped up when we got to more intensive machine learning. When I expressed doubts about the pace of the course in the beginning, General Assembly responded to my concern. They didn’t try to talk to me into staying, but instead gave me the option of backing out after a couple more weeks. In the end, it paid off!

The Data Science Immersive covered the basics of machine learning very well – I really did learn what I needed to be conversant. Then for our project at the end of the course, I took a topic that I was interested in, which was NLP (natural language processing), and went deeper into it. The course got me to where I needed to be, even if the first few weeks were a little slow.

Who were your instructors?

We had two instructors, one in the morning and one in the afternoon. I totally loved the morning instructor – perfect for me in terms of pace, intensity, and feedback. I struggled more with the afternoon instructor and I gave that feedback. GA asks for a lot of feedback, which is great because everyone has different learning styles. The class was definitely skewed towards people with a lot less experience in analytics than me. And I had to appreciate that there will always be a mix and that I was going in as someone who had a stronger background.

Tell us about that Natural Language Processing project you built at General Assembly!

For my final project, I wanted to work on natural language processing. I always like practical applications, so I came up with a data analysis project, using data from the runner focused website, RaceRaves, where people review running races, search for upcoming races, and get information. First, I reached out to RaceRaves to ask about using data from their website. I got them to agree by telling them I’d give them a product, which was a race recommender.

I used the RaceRaves reviews to create race recommendations for their users. Within those reviews, you see the sort of race features runners are looking for, like “it's a flat, fast course” or “it's got beautiful scenery.” We can use those preferences to find other reviews that would be a good match for them. My project was a basic proof of concept that you can use natural language processing and matching based on the topics.

Once I completed my project, RaceRaves liked it so much that I started doing freelance work with them to build out the recommender. Starting with the basic topic matching, we've added a bunch of filters, like how far you're willing to travel for a race. And now we’ve been able to put together the top five recommended races for all users on the site. As a sort of beta test of the recommender, we are selecting a select portion of users to receive emails with their recommendations so they can provide feedback and improve the tool.

Yes, I did feel supported. I really thought they did a good job supporting me on the job search. Each week we had a one-hour session about job placement and outcomes to keep us on track. General Assembly did a great job in terms of understanding our primary goal was to learn, get through the program, get the new skills, but also to make sure that we were doing things like updating our resumes and LinkedIn profiles, and creating a portfolio.

For me specifically, Facebook reached out to me twice via LinkedIn. I know part of the reason is because I updated my profile based on advice from General Assembly. My profile is way stronger now after the course. It only took a few weeks after graduation before I had dozens of profile views a week.

Tell us about the Facebook interview process. How’d you land the job?!

An internal recruiter from Facebook reached out to me via LinkedIn. We did a couple of video calls and once I passed that, they brought me in to talk to six different people. I had a few follow-up interviews – working through a lot of tech screens and problem-solving. With my analytics background plus GA, the Facebook interview process went very smoothly – I felt prepared for all the questions. I especially liked that all of the questions were really applicable and not hypothetical.

What are you up to now at Facebook? What do you work on?

I honestly don't know if this role exists elsewhere – I am a Decision Scientist, which is slightly different from the more typical “data scientist” role. Decision Science is specific to marketing analytics – I use similar tools and methods as data scientists, using them to evaluate marketing effectiveness and support Facebook’s marketing programs.

There are at least a dozen scientists on our team. We sit in the Research department, called Insight and Analytics, so it includes marketing and research where we track all sorts of things. I’ve been here about five weeks and it's been very interesting – Facebook has a new approach to what I've seen in the past.

Would you have been able to land your Decision Scientist role at Facebook without attending General Assembly?

I felt strong enough in my data analytics background, but I had never used Python or any true machine learning tools before General Assembly. So I would not be as conversant in the tools, and be able to jump in and use them so quickly without having gone to General Assembly. If I hadn’t gone to General Assembly and still somehow landed the job at Facebook, it would have been much harder to onboard. You don’t join your team until the 4th week at Facebook because there's orientation and then an internal data and analytics bootcamp. Everything at Facebook is homegrown, so you have to learn all their internal tools – how the process works and how code production works. But all of that would have been more daunting without my updated toolkit from General Assembly.

Do you have advice for people looking to make a career pivot through a data science bootcamp?

A bootcamp was perfect for me. If you have a technical background and you’re really trying to move your career in another direction, a bootcamp is a really great starting point to get familiar with coding and new tools. As someone who went to bootcamp with more experience, I think it was even more valuable. If you have less experience and you’re trying to pivot from a different career, I’m sure it will be harder for a data science/data analytics job – it’s 12 intense weeks of learning the basics. I learned a lot from my bootcamp experience at General Assembly, and I got what I wanted out of it  – landing a job at Facebook!