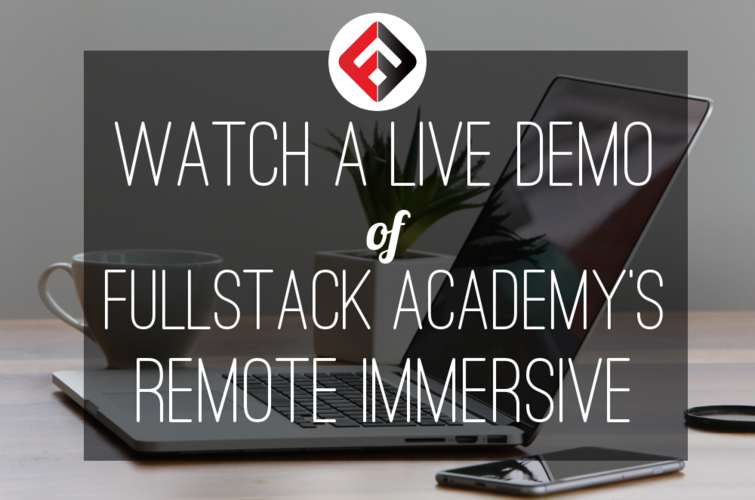 After successfully launching Grace Hopper Academy and acquiring Starter League, the team behind Fullstack Academy is expanding into the world of online education with the Remote Immersive. We connected with founders David and Nimit to answer all of our questions about the Remote Immersive (we’re talking time commitment, admissions standards, and employment opportunities). We’ll get a demo of the Remote Immersive platform so you know exactly where you’ll be learning. Plus, they explain how high-quality remote immersives could actually help to democratize bootcamps.

First, tell us about this newest online offering from Fullstack Academy.

Nimit: Half of the US population lives outside of metro areas, and therefore lack access to an in-person coding bootcamp. There are clearly a lot of very smart and motivated people out there who want to learn at Fullstack Academy, but we previously weren't able to reach them.

The Remote Immersive is something that we've been wanting to do since 2014. Since this is the 4th program that our curriculum is supporting, scaling the curriculum to support separate programs has been the easy part; now we're just getting the technology right. After successfully launching Grace Hopper Academy and our campus in Chicago through Starter League, we're now very comfortable with entering the online frontier.

How is the new Chicago campus going??

Nimit: The first class actually started last Monday at 1871 in Chicago, and it's going super well. It’s very surreal to know that there's another city in the world that’s teaching the Fullstack Academy curriculum.

David: I'm actually going there tomorrow so we really believe that it's happening!

Do you think there's something inherent about learning to code that almost lends itself to learning online?

David: I think that's a great intuition. Right now, we’re asking ourselves, “Can we actually use this online medium to deliver an excellent experience to students, improve the amount of coaching, improve the tools that you need to be a good programmer, and reduce distraction?”

Nimit: Yeah, learning online has some great benefits: reducing distractions, even cutting down on commute time is a big saver. We're also able to experiment with tools that aren’t  being used in education right now, like virtual reality. Pedagogically, those opportunities  are very exciting for us.

Fullstack Academy has delivered other intro programs online, too. What lessons did you learn from those programs?

Nimit: Something that we learned from Remote Bootcamp Prep is that our instructor to student ratio is not an area where we can scale just because it's remote. We learned that we need to make the same number of instructors and teaching assistants available as we do in an in-person setting. That's a key thing that everyone should know; Fullstack’s Remote Immersive is different from a mentor-lead program where you have one hour a week with your mentor. In the Remote Immersive you are interacting with instructional staff 8+ hours per day.

David: Plus, we learned a lot about communication tools. For example, we thought a lot about activities that people can do online to feel more connected than just using videos or Slack. Slack is great if you know the person you’re Slacking with. But if you don't know them already, it doesn’t do a lot to make you feel more connected. We're trying to leverage a lot of other tools that make people feel like they're in the same classroom, even though they're online.

What’s the time commitment expected of students in the Remote Immersive?

What are you looking for in applicants? Do they need specific qualifications? Are you using the same admissions standards as the in-person?

Nimit: Bootcamps themselves are making education more accessible, but having to move to our campus cities to take the Fullstack bootcamp is a very real burden. It actually ends up decreasing diversity in the bootcamp space in general, because it requires a certain level of economic flexibility etc. In some ways, I think the Remote Immersive (and the rise of high quality remote bootcamps) will be a democratizing force in bootcamps.

How about time zone? Do applicants need to be in a certain location or time-zone to take the Remote Immersive?

Nimit: Time zone is such an important facet of launching a synchronous, online class. Class will start at 10:00 am EST (7am PST) making it convenient for people in North America.

How will students in the Remote Immersive be learning the curriculum?

Over the last year and a half, we've been building out Learn Dot, our internal learning software, and closely measuring how students and instructors are performing. For Remote, we’ve had to do some technical buildout for the platform itself, but it was already pretty robust internally. Now we get to focus on how to build the online community and make the coaching supremely effective.

Which tools will you use in the Remote Immersive?

David: We're experimenting with that right now, but in our initial launch, our main tools will be Zoom for video conferencing, Full Bits for pairing and group work, and a whiteboarding tool that was built by former Fullstack students. Along with Learn Dot as the Learning Management System, for content, workshops, and assessments.

Will there be interaction between the in-person and the online immersive cohorts? Will their instructors be the same?

Nimit: The instructors for Remote do come from the same staff - students can expect to be taught by the same experienced instructors. As far as the students themselves, we think of Remote Immersive as a new campus, so they won’t be interacting with our New York or Chicago campus students.

David: It's not like the Remote Immersive has a video feed into our New York campus. There're pro and cons to that setup. It's cool to see other students live, but I think that’s the last vestige of the current educational system; it's just not interactive enough.

When we teach a remote class, the instructor will know each of the students personally. They’ll be able to take questions from them, pause when one of the remote students has a question, etc.

Since this is the first cohort, I'm assuming that there will be some hurdles. How are you preparing yourself for feedback?

David: We are both huge believers that a strong start is essential to future success. Nimit and I will both personally be overseeing the operations of the first cohort. We're letting students know that this is our first time doing the Remote Immersive, but it's not our first time doing immersive education. Thinking back to our Fullstack New York and Grace Hopper launches, the first cohort is particularly exciting because it's a very collaborative and engaged process.

Nimit: We recognize that remote is a new medium, but we've gained valuable experience by teaching Bootcamp Prep online, and using Zoom internally. We’ve also extensively tested all the tools, and the thing that really makes us successful is our willingness to iterate based on evidence. I don't have any loyalty to Zoom, for example; I’m loyal only to having the highest quality educational experience for our students. We will be paying very close attention to what students are saying in the first cohort. We’re also investing in the Remote Immersive through a new Scholarship Fund, to provide more opportunities to attend.

Speaking of remaining loyal to tools and technologies, I heard you recently dropped the M from “MEAN Stack.” Can you tell us about that change?

David: We actually personally know the engineer at Mongo who coined that term “MEAN” very well. It's not a slight to Mongo that we cut it out of the curriculum, but our loyalties lie with our students and ensuring that they can get jobs. A lot of companies like what they're seeing with Mongo but they need developers who know SQL. In the past, we’ve emphasized Mongo and taught SQL, and now we're just reversing that. We're emphasizing SQL, and students still see a little bit of a Mongo. We’re using Postgres as our SQL database because they’ve really developed their documentation capabilities. If you look at recent dev technology usage trends, you’ll see that SQL, along with JavaScript, are some of the most popular technologies, which was another important factor in our switch to SQL.\

Are you hearing concerns or excitement from employers about hiring students who learned to code in an online program?

Nimit: I've never heard an employer complain about the medium of education. You hear them complaining about the quality of education. I think that what you learn is much more important than the medium. We’re communicating to employers that we maintain the exact same quality,  educational standards, and outcomes for all programs.

David: Another interesting thing is we get requests from employers asking for things like “10 developers in Lexington, Kentucky.” We could be helping people in those areas skill-up and get those jobs, but not with the current in-person ecosystem. That’s one area where Remote Immersive will be very valuable.

What’s your advice to employers who still aren’t comfortable hiring engineers from a coding bootcamp?

There’s no magic dust that makes someone a senior engineer overnight. However, I think that companies need to very much understand what bootcamp grads are good at and how they fit into an organization and a career path. I've heard from recruiters at Google and Facebook who are now looking to bring on hundreds of coding school engineers. Google has been hosting 2-3 day long seminars for coding bootcamp graduates to navigate the Google engineering hiring process.

Those companies recognize that coding bootcamps are a great source of talent, and the student bodies are very heterogeneous compared to what they're seeing in Computer Science programs. In fact, just within the last 6 months, 3 Fullstack grads have gotten software development jobs at Google, and Facebook recently hired a graduate from Grace Hopper Academy as an engineer. When you see the most selective tech companies hiring bootcamp grads, I think that sends a signal that the hiring market is getting past its unreasonable fear of these programs.

When does the first Remote Immersive cohort start?

David: The ‘Foundations’ pre-course starts in September, and the full-time portion starting in October.