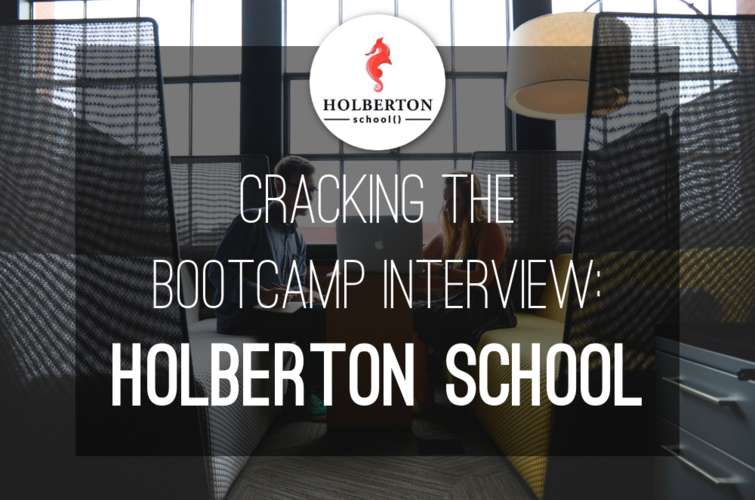 After interviewing Holberton School students, we noticed a trend: they actually enjoyed the application process for the San Francisco-based bootcamp! We wanted to find out what makes the Holberton application special and unbiased, so we sat down with co-founder Julien Barbier to get the scoop. Here, we share what we learned: what to watch out for during the 3-level application process, why it’s designed for beginners, and how the founders created an application that removes bias to promote a diverse student body.

First, tell us your role at Holberton and your role in the admissions process as the co-founder.

I'm a co-founder Holberton School. Since my team and I all worked in the tech industry for years before founding Holberton, we knew there was a problem with diversity, and wanted to build a solution into our school from the start.

As we thought about the admissions process, we wanted to create a cohort of people who have enough potential and deserve to be here. When we think about diversity in terms of quotas etc, I think we lose out in the classroom.

At the same time, we wanted to design a way to remove discrimination and human bias in the process. Bias is encoded in our DNA; as a white, 30-year-old man, you’re going to select others who look/talk/dress like you. We have three levels to our admissions process, two of which are automated, then we interview the applicants who made it through.

What exactly is automated throughout the application?

There are three levels to the application. Level One and Two are automated; Level One is a literacy test, an essay, and a video. Applicants should read and understand English (because our course is done in English). That's essentially the only prerequisite. For instance, we ask questions about the life and history of Betty Holberton.

Next, applicants write an essay on why they want to become a software engineer and why they want to specifically learn at Holberton School. Some candidates will say they watched a movie or read an article or that they know friends who are programmers; others may realize that they’re not passionate about this by simply writing the essay. We want candidates to take the time to understand why they want to do Holberton. In order to write the essay, they need to understand what Holberton School is and how it's different from other colleges or bootcamps options. Otherwise, they may realize that a Holberton is not for them; and if they choose another path thanks to the application, we're happy about it. The software also analyses your essay and calculates a score for you.

The last step in Level One is a small video of yourself between 30 seconds and one minute long so that we can know you better before you start on Level 2: the Project Phase.

How many applicants are accepted into Level Three, the interview phase?

Somewhere around 8% to 10% of the candidates.

For our last class, it was below 2.5%. We got over 1,300 applications for each of our classes. But don’t be impressed by those numbers. Most of the candidates who were motivated got to Level 3.

After going through a couple of admissions rounds, have you found that your plan was effective? Did you end up getting a diverse applicant pool through to the Interview Phase?

Yes! Actually, the first class was 40% women, 44% people of color. Ages range from 17 to over 50 years old. We did not expect that at all. We especially didn’t expect to see that almost three-quarters of our students had to relocate from outside of the Bay Area.

The admissions process tends to select only people who are very motivated, so in the long run, we're going to have a much smaller dropout rate than regular colleges. I think that in America, over 50% of people never finish college. So far, we’ve had two people drop out, which is very, very low considering the intensity of the program. The program is intense, but when you are passionate about something, you’re just happy to work hard.

How long does it typically take for a student to go through the entire application process?

I've heard anywhere from 5 hours to 50 hours. The application isn’t necessarily hard, but it is very time consuming. If you like the application process, that’s also a good sign that you're going to enjoy being at Holberton and being a software engineer.

You can do Level One at your own pace. You have two weeks to finish Level Two (the project).

What kind of technical background does an applicant need before they start the Holberton Application?

Zero. Actually, more than half of our students did zero coding before applying (ie. they had never seen a terminal or used Linux before).

During Level Two, you’ll build an entire project through different steps, and for each step, we drive you towards solving it. At the very beginning, we drive a lot and then a little bit less over time so that you have to really use everything you've learned.

The project consists of learning the basics of the Linux command line, and then building a website on a server. So we give you a server, you have access to it, and you type everything on the command line, you manipulate web server configuration file, and then start using HTML, CSS, and a little bit of Javascript.

We’ve interviewed a few students at Holberton and they all pointed to Level Two as being a fun learning experience- I was surprised to hear that!

Our goals for the admissions process were to remove bias and tackle diversity, but also to make it fun and educational. Even if you're not admitted to Holberton School, you will have learned a lot during the application process.

At the end of the application, you can show your website to your friends and be proud of what you've built.

It sounds like Level Two is a way to give a technical coding challenge to a complete beginner that doesn't have any experience coding.

Exactly. Plus, because we don’t have traditional “teachers” at Holberton School, a project-based application gives applicants an insight into the Holberton learning environment. As an applicant, you’re learning through a project and interacting with peers- exactly how you’ll learn if you’re admitted.

Applicants interact with peers during the application process??

You interact with all the other candidates via the forum while doing the project at the same time. Once you start Level Two, you have two weeks to finish, and during those two weeks, you can ask questions and help other candidates.

What does your team look for in applicants during the Level Three interviews that indicate they’ll be a successful software engineer?

First, they need a bit of raw talent and motivation, which is usually driven by a passion for the field. For example, an accountant who realizes that their favorite part of the job is creating macros in Excel, so they start to study on the side. Passion drives motivation, and if you have the motivation, you can do anything. Even if you're super smart, without the motivation to go through this intense program, you're not going to succeed (that’s true for everything, not just Holberton School).

Level Three is meant to do what the software cannot. Before the interview, we send reading material that’s based on what they did in Level Two. The goal is to see if they actually did the work that they submitted in Level Two. Cheating is hard for software to catch (although we haven’t had any cases of cheating so far)!

The last thing we want to check during Level Three interviews is that you’re prepared to move to San Francisco and that you really have a financial plan. Hopefully, we will open Holberton School in other cities with lower costs of living, but for now, we're in San Francisco, which means you’ll need at least $1300 a month for rent and living expenses. We also remind applicants of our values.

Is there anything else special about the interview phase that our readers should know?

If possible, we invite applicants to interview at our space so they can see a face behind Holberton School. I also introduce them to our current students so that they can ask questions they would not dare ask me.

What’s new at Holberton School? What have you learned from the first cohorts?

The first Holberton class was totally free; we’re now implementing income share agreements. That means that students don't pay while they're enrolled in Holberton, which is another way we ensure a diverse class. If there is a wall around payments, then only people who can afford tuition will be able to attend. We want to offer this high-quality education to all as we believe that people from every community and background should have the opportunity to become a software engineer. Of course, it’s still in San Francisco, so the cost of living is high, but the pool of talent that can attend Holberton is much broader than any of the other colleges or bootcamps.

When does the next class start and how can people apply?

Our next class is January 30th. Applications are now open and you can start an application here.