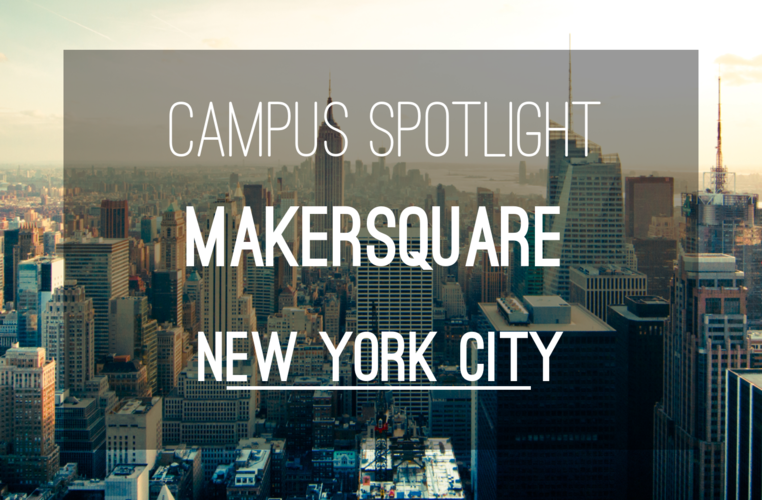 MakerSquare has just opened in New York; its fourth campus after Austin, Los Angeles, and San Francisco. We spoke to campus managing director, Tyler Lambe, about his background starting another bootcamp, why MakerSquare chose to expand to New York, how the curriculum differs compared with other campuses, and what sort of companies are hiring junior developers in NYC.

How is MakerSquare NYC going so far?

I came out to here in late February 2016 to launch the campus, we started our very first cohort in New York on May 31st. Our first cohort in NYC is MakerSquare’s 42nd ever cohort. Right now we are almost at the midway point, and everything is going really well. We have an incredible group of passionate, intriguing people. It’s awesome to see. Our first cohort will graduate at the end of August.

What’s your role at MakerSquare NYC?

After playing a major role on the Launch Team I’m now the Managing Director of our New York City campus. My role is ensuring the success of not only the students, which are our primary focus, but also supporting our staff. We are firm believers in the culture of making staff happy and making this a great place to work. And that effort translates into making sure our students are having an amazing experience.

What’s your background and how did you get involved with the bootcamp?

Prior to launching this campus I ran my own coding school which got absorbed by MakerSquare. It was called Batch Academy, and it was started in Austin alongside the Reactor Core network which MakerSquare is also part of. We were considering launching in NYC, and coincidentally so was MakerSquare, so it made sense for us to join forces and launch under a larger, more well-established brand.

I’m an entrepreneur by trade, I’ve been coding for quite some time. I started coding in high school, always hacking on passion projects. I was naturally interested in starting companies, so I taught myself to code and worked as a developer for a few years. I was building my own software and products and trying to get them out there. One company I started was PC optimization software.

Then a few years ago when I was looking to further expand my web development skills, I stumbled across MakerSquare. So I moved to Austin and took the MakerSquare program, which was a life-changing experience, and helped me find a passion for teaching and education in general. I got swept in by the gravity of MakerSquare’s mission.

Why did MakerSquare decide to open a campus in NYC?

Our launches in Los Angeles and San Francisco have been so successful, we were looking at new markets, trying to work out where MakerSquare would fit well next. New York had the best setup. We were considering other cities, but when you look at the data of open jobs in New York specifically for JavaScript development, the tech community at large and how quickly it’s growing here, we knew it was an environment where we would continue to thrive. In reviewing other immersive programs in the area we learned that we’re one of only a few coding bootcamps that teach full stack JavaScript.

There are actually a lot of coding bootcamps in NYC. What will make MakerSquare stand out amongst the competition?

What MakerSquare brings to the table here in NYC is a driven culture, robust community and distinct peers. There are plenty of coding bootcamps in NY, but one thing we do really well is selecting the right people for the program. We make sure that people all walk in here with similar goals, and all are up to the technical proficiency where they are going to be successful in the program. I think in New York we capped our first class at 20, and we had a selectivity rate of about 25%, so we were very specific with the folks that we let into the program. This selectivity doesn’t just create an awesome goal-oriented culture, it ensures that the people in our program are making a smart investment in their future.

MakerSquare is also in three other cities, and many of the people in New York are eclectic and  transient, they are here temporarily. A lot of our students are actually from the northeast in general and they move to New York just to take this program. One of the great things about the Reactor Core network is when these folks graduate from our program in New York they can look for jobs anywhere they want.

We are in the heart of midtown at 30th and Broadway, in a coworking space called Grind, which is an up and coming co-working space. The campus is breathtaking. We were in talks with Grind in the early stages when they were building out this space, so we were lucky enough to draw out some floor plans of our ideal set up and we got exactly what we wanted. It’s conducive for our students as well as for our staff. Grind comes fully stocked with a full kitchen, access to coffee, tea, they do happy hour sometimes, various community activities, and weekly yoga sessions. All students are considered members of the space so they can take part in all of those events.

How is the campus similar or different compared with the other MakerSquare campuses?

It’s strikingly similar with respect to the program itself. We run the same curriculum, we have very similar instruction and teaching styles, partly because our entire team came from other MakerSquare campuses. I’m from Austin, our growth and community manager is from Austin, our two instructors are from LA, and our entire teaching assistant team is from San Francisco.

It’s also very similar in look and feel. We have a designer who we consult with for interior design for all our campuses. We use similar chairs, desks, pairing station monitors, the lecture halls are similar, and the overall the feel is fun and modern, with a lot of glass, open space, and natural light.

Will you be teaching the exact same curriculum as the other MakerSquare? Or will there be any tweaks or adjustments made for the NYC market?

Yes, one thing we do differently from other campuses is we focus more on teaching SQL as opposed to Mongo. What we found when we polled all of our alumni who are already here is that SQL is a lot more common than Mongo at their current jobs, and what their companies were hiring for. Otherwise, we teach a very similar curriculum to other campuses.

A few other campuses have similar situations where they teach slight deviations in the curriculum. Because we are part of a network we didn’t have to develop a SQL curriculum, it was already built for one of our other campuses which was in a similar situation. Iterating and building on the curriculum is something we are all about. If that means it’s something specific to New York, then we make that happen. I’m sure as we get graduates out in the field here and get more insight into what they learned in the class and it’s relevancy to the market, we will continue to iterate and find other things to improve upon.

How many instructors and/or mentors do you have?

Each class has a dedicated technical mentor who can be considered the head of instruction for that particular cohort, and then we have a big team of TAs: two instructors, and five teaching assistants. You could consider me the third instructor, but my role is to train the instructors, and jump in to teach only here and there. I run many of our workshops and public classes.

What kind of hours do students put in?

Our program runs officially from 9am to 8pm, but students work well into the night. That’s the culture here. Students are excited to be putting their new skills into practice, hacking away at their various projects and improving upon their skill set. We do have class officially on Saturday, but Sunday is reserved for rest and rejuvenation.

What types of companies are hiring developers in NYC?

The Financial District here in NY is immense and growing their technical teams rapidly; probably the largest industry that the majority of our alumni work in is something tangential to finance. We also speak with a lot of hardware companies, some general software companies, dev shops, agencies, and even insurance companies.

What sort of jobs do you think graduates will get?

Almost all of our graduates end up landing software engineering jobs. Their title is software engineer and generally, we place them in mid-senior level roles. They generally tend to deviate from the curriculum that we teach, which is ironic to me – you learn something then go do something different. But one of the things we focus on in our program, and this goes for every campus, is teaching students the ability to learn and tackle problems they’ve never seen before. That to me is what defines a good MakerSquare graduate; somebody who is not only able to learn what they learned in the course and perform proficiently in it, but also be able to take a job with some other technology pick up on it quickly enough, adapting to the team and the codebase.

Do you think there are enough jobs in NYC? Is there a shortage of developers?

From a cursory perspective, absolutely! There are tons of open jobs here and reports indicate that there will only continue to be more need for software engineers. Being from New York I can say pretty confidently there is a ton of available work here. The tech scene in NYC is very much on the way up.

What meetups would you recommend for a complete beginner who wants to learn about coding bootcamps?

MakerSquare offers plenty of introductory workshops and classes, where we take people with basically no experience and introduce them to the concept of JavaScript and coding, what programming means, and how it is as a career. So everyone who is really interested in getting a taste of this stuff should swing by our campus. We do workshops generally once or twice a week, with varying topics, often introductory and beginner in nature.

Find out more and read MakerSquare reviews on Course Report. Check out the MakerSquare website.