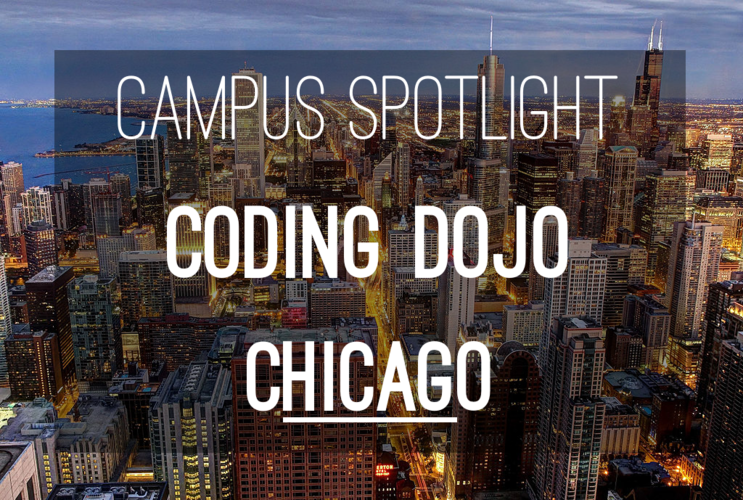 Coding Dojo is about to open a campus in Chicago – their sixth after Silicon Valley, Seattle, Los Angeles, Dallas and DC. Chicago community manager Jeremy Peters has been preparing for the opening and meeting local businesses. We spoke to Jeremy about why Chicago needs another coding bootcamp, the reason they are teaching Python, and the sorts of jobs he expects Coding Dojo grads to get in the area.

How’s it going so far in Chicago? When does the campus open and when do the first students arrive?

The campus opens in early August. We’ll hold our first events on August 3rd and 6th, and our first cohort starts on August 15th. I live in Chicago a couple of miles from the campus, so I’ve been monitoring the renovations. I’m really excited! We’ve had a lot of interest, so most of my days are occupied by admissions interviews, inbound questions, and campus tours.

I’m the Chicago community manager, so I’ll be handling business operations and partnerships. Until we have a full-time career services person onsite, I’ll be helping with careers as well – getting employer partnerships in place.

What’s your background and how did you get involved with the bootcamp? What drew you to want to work with Coding Dojo?

My background is kind of interesting. I was a classroom teacher in a high school in Inglewood, Chicago for 10 years. It’s a high poverty, low income African American neighborhood. I taught new media literacy in a social studies environment, and I trained educators on how to use new technology in the classroom. I was fascinated by how the new generations are natively in sync with new technology in the world and the role it plays in society.

In 2013, I made the switch into tech. The tech startup scene here in Chicago really started to take off around 2012, 2013. I worked with some early stage edtech companies, then joined a company called MDR which does innovative marketing for companies in the edtech space. My role was working with tech companies to deliver integrated marketing campaigns directed at teachers and educators.

While I was there, I went through two coding bootcamps – Startup Institute and Anyone can Learn to Code. Those programs were kind of in their infancy, so since then I’ve been fascinated by the bootcamp space. The programs I did were part time,and they were all trying to figure out their models. I wanted exposure to Coding Dojo, because of the very unique three track curriculum design. At that time, Chicago was pretty much immersed in Ruby on Rails and that’s all you could find.

How did you first hear about or come across Coding Dojo?

I came across it on Course Report of all places. I had read about it in a review of bootcamps, about two years ago. Last year, I was working more specifically with early stage edtech companies who were delivering coding education, in the K12 space. I found that pretty interesting, and I know that Coding Dojo has a platform which could lend itself well to the K12 space. Also, most companies I worked with were based in Silicon Valley, where Coding Dojo is based. The three-stack curriculum is really unique so that drew me to the program. When they announced a Chicago location, I jumped at the chance to reach out and see if I could help get the site launched.

Why did Coding Dojo want to expand to Chicago? Why is Chicago a great place for a coding bootcamp?

Chicago has got a really unique tech startup scene and there is a huge market opportunity. There are a lot of companies here that are really hungry for talent. A lot of the earlier to mid-stage tech companies are based in Ruby on Rails, and are now making the transition to more JavaScript and Python. Most of the bootcamps here are still focusing on Ruby on Rails. Some are switching to more JavaScript, but they are all very teacher-centric, so that’s not very scalable.

As well as the language difference and tech platform, what else will make Coding Dojo stand out amongst the competition?

What’s awesome about Coding Dojo is they have this really unique tech platform which allows us to scale instruction in a more individualized way to maximize instructor contact.

Furthermore, I think we have a very unique position. We can truly work with any student, no matter where they are in their development pathway or what their background is to help them learn those core fundamentals and land that first job as a developer.

What is the classroom like? What neighborhood is it in?

It’s a really beautiful space. It’s in River North, in the heart of the Chicago tech scene in a 7000 sq. ft. temporary space on the second floor of 213 West Institute Place. Then in December we are moving to a gorgeous 9000 sq. ft. space almost identical in appearance but on the 6th floor. The instruction space is going to be very open, modern and bright, and we’re excited to have a custom build out in both our temporary and permanent spaces. We’ll have a large open space with three or four conference rooms, and phone call rooms. Both are conveniently located above Headquarters Beercade, a vintage video game bar. So we are definitely excited about that!

How is your campus similar or different to the other Coding Dojo campuses?

It’s going to be similar in terms of curricular use of the space. When the programs are up and running at full capacity, we will have concurrent cohorts. So we’ll need a lot of open space; breakout space for conference rooms, interviews, and more group work-oriented spaces.

What tracks or languages are you teaching at the campus?

We’ll be offering Python, MEAN stack/JavaScript and Ruby on Rails. We anticipate a lot of demand for our iOS program, so we’ll be bringing that on in the fall.

Why did you choose those? Are they particularly popular or relevant in Chicago?

Python is in really high demand in Chicago as is JavaScript or MEAN stack. Being that Chicago is the birthplace of Ruby on Rails, you can’t get away with not offering it. Students will have the opportunity to choose which stacks to study. Our first few cohorts will get access to iOS through an alumni pass later on. That’s the other benefit of our curriculum – once a student goes through our program, they can elect to carry an alumni pass that gives them access to all of our curricular platform. We believe in teaching students how to learn, not necessarily what to learn.

How many instructors and/or mentors do you have in Chicago?

We’re anticipating a full cohort for the first cohort that should be between 15 and 20 students. We got an outpouring of interest in spring and now we are just finishing up the application and interview process. Everyone is really excited about the three stack option. We’ve already been accepting students for our second and third cohorts. The next cohorts start on September 19, October 17, and November 14.

What kind of hours do you expect students put in?

We generally run a 10 to 14 hour day. Instruction will officially take place between 9am and 4pm, but the space will be accessible on a 24 hour basis. There are long days because we’ve got to make the most of our time while the students are there. Every student has a different pace of learning, and ability to master new content and skills so we are pretty reactive to that. We want to make sure our space is accessible to people no matter their learning or background.

Can you tell us a bit more about what the tech scene is like in Chicago?

Chicago has a very unique, new, but fast-growing tech scene. We’ve got a few large fin-tech companies like Avant, and Innova. We’ve got some very large ecommerce type companies like Groupon. Those companies are right down the street from our campus. Then we’ve got the 1871 Center for Entrepreneurship, which is kind of the hub of the Chicago startup scene. We also have the whole River West area where Google’s new office is located, and everything is filling in around it.

What types of companies are hiring junior developers in Chicago?

We’re open to partnerships with any companies seeking developer talent. Most often that tends to be series A to D mid-size tech startups that aren’t really startups anymore. And then quite a few really small bootstrapped companies, that need someone who can hit the ground running and just figure it out. Although that is not the ideal setting for a new developer, we are primarily focusing on building relationships with middle-stage tech companies who can nurture junior talent, help them continue their learning process, and build great products.

What sort of jobs do you expect to see graduates getting? WIll they stay in Chicago?

There are a lot of front-end opportunities in marketing tech. There are also a lot of back-end ecommerce roles where a lot of companies are looking to bring in new talent. There are also quite a few middle to small boutique software development firms in Chicago that we’d love to build partnerships with. These firms could offer opportunities our for grads to work on different projects, and build out a wide range of capabilities.

I think most will choose to stay in Chicago because of the sheer volume of opportunities here in the city. We have a very strong ecosystem here, which is why Coding Dojo came here in the first place. We anticipate that maybe one or two per cohort may want to move to Silicon Valley, Seattle or DC. That’s one of the flexibilities that we afford.

What meetups would you recommend for a complete beginner who wants to learn about coding bootcamps in Chicago?

We do have a meetup page Coding Dojo Chicago and in August we are hosting two scheduled meetups. We have an open house or campus tour on August 3rd, where students can tour the facility, meet the lead instructor, some of the TAs, get information on the curriculum, and have the chance to ask questions. On Saturday August 6th, we are offering an all day intro to coding workshop where students will be introduced to HTML, CSS, and JavaScript fundamentals. They’ll get a chance to play with our platform and see how it differs from other platforms on the market.

Is there anything else you’d like to add about Coding Dojo Chicago?

I’d like to highlight our scholarship opportunities, which are really unique. Being a West Coast bootcamp originally, we see more diversity on the West Coast than here in Chicago specifically. That’s been an issue the tech scene in Chicago has been grappling with since six or seven months ago when a report came out about the 47.5% unemployment rate among African Americans in Chicago. So we have a lot of diversity scholarships. We have scholarships for women, career changers, new graduates, and veterans. That can be as much as a 50% discount if someone receives that scholarship.